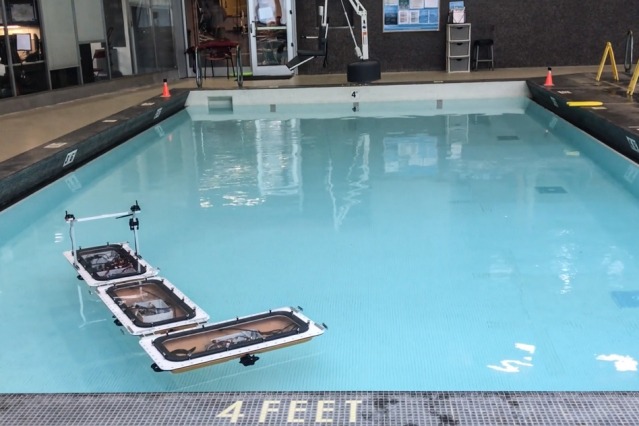 The "roboats" are able to reconfigure themselves to form bridges, rafts and floating stages (Credit: MIT)

The Massachusetts Institute of Technology (MIT) is bringing the Transformers franchise to life after demonstrating how its flotilla of robot boats can work together to form autonomous water-borne structures.

Developed in conjunction with Amsterdam Institute for Advanced Metropolitan Solutions (AMS Institute), the “roboats” could be used to clean up rubbish from the city’s canals, transport goods, ferry people and combine to form a major new bridge.

MIT professor and director of the Computer Science and Artificial Intelligence Laboratory (CSAIL) Daniela Rus said: “We’ve enabled the roboats to now make and break connections with other roboats, with hopes of moving activities on the streets of Amsterdam to the water.

“A set of boats can come together to form linear shapes as pop-up bridges, if we need to send materials or people from one side of a canal to the other, or we can create pop-up wider platforms for flower or food markets.”

How do the robot boats work?

Each robotic boat has a variety of sensors along with GPS modules and a small computer that acts as the autonomous vehicle’s brain.

Prototypes of the boats were first tested in 2016, while the latest model (seen in action below) features four electric propellers and an autonomous latching mechanism that allows them to connect with each other.

The previous 3D-printed roboats were limited to moving forwards, backwards and laterally along a predetermined path.

But the latest iteration are programmed with an algorithm that allows them to move in sync while forming more complex shapes.

The new programming means that the individual boats can separate to navigate an obstacle in the water before reattaching in a new area.

MIT claims it’s possible for dozen of the new roboats to work together, with transformations carried out in a matter of minutes.

In order to make the system work, coordinator and worker boats are required.

The coordinator is equipped with an inertial measurement unit, which calculates the location, speed and orientation of the worker boats in the system.

Coordinators also control where each of the units must move to when transforming into a new shape.

For its latest experiments, MIT used a platform consisting of two workers and one coordinator.

Up to 12 roboats working have been combined by researchers in computer simulations.

One of the first tests for the autonomous technology will be forming a moving bridge over one of Amsterdam’s many canals.

The “dynamic bridge” will cross a 60-meter stretch of canal between the NEMO Science Museum and a new area of the city, currently under development.

The robot boats will be programmed to sail in a continuous circle, collecting people at one side and dropping them off at the other — cutting the trip from 10 minutes to two.

Professor Carlo Ratti of MIT said: “This will be the world’s first bridge comprised of a fleet of autonomous boats.

“A regular bridge would be really expensive, and would need to have a mechanism that opens to allow boats through or be very high to allow them to pass underneath.

“But we can connect two sides of canal [by using] autonomous boats that become dynamic, responsive architecture that float on the water.”

In order to achieve this ambition, the roboats will need to be robust enough to withstand difficult weather conditions, strong enough to carry several people and capable of connecting to the canal-side.