The Hurtigruten-built MS Roald Amundsen - named after the famous Norwegian explorer - operates mostly on liquefied natural gas, but for up to 60 minutes at a time, it can switch to battery power 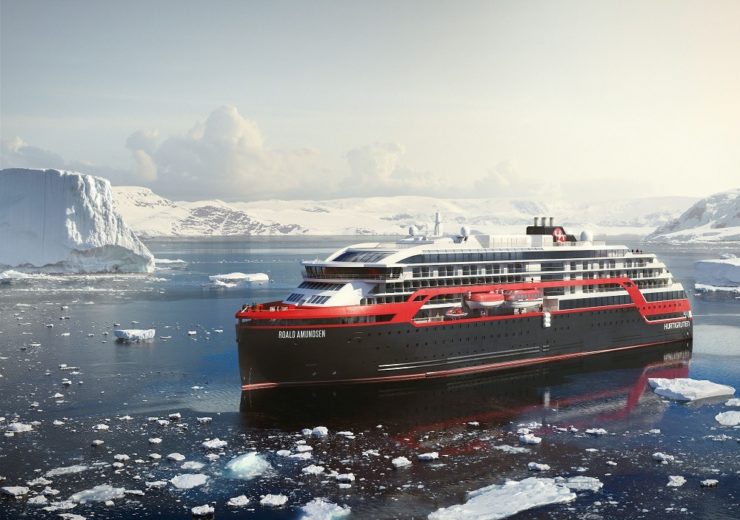 The shipping industry is one of the biggest emitters on the planet – but that could be about to change after the world’s first hybrid-powered cruise ship set sail.

The MS Roald Amundsen uses battery packs to support its low-emission engines – which its manufacturer claims will reduce carbon dioxide emissions by more than 20% compared to other cruise ships of the same size.

Norwegian firm Hurtigruten, which operates the expedition vessel that set off on its maiden voyage off the coast of Norway in late June, announced yesterday it will conduct the first ever ship-naming ceremony in Antarctica this autumn.

CEO Daniel Skjeldam said: “With the great explorers deeply rooted in our history and heritage, Hurtigruten aims to be one step ahead when exploring the world.

“Our new ships will be moving boundaries for the technology, for the industry and for our guests.”

We look at the key details behind the MS Roald Amundsen.

The vessel made maritime history when it became the first cruise ship in the world to sail purely on battery power when it left Kleven Shipyard, where it was built on Norway’s west coast, for the first voyage last month.

It operates mostly on liquefied natural gas (LNG) – regarded in the energy industry as the “cleanest” fossil fuel available by producing about 25% less CO2 than traditional fuels – but for up to 60 minutes at a time, can switch to battery power.

The benefits of this aren’t just environmental, as passengers will be able to sail in silence.

Hurtigruten says the MS Roald Amundsen – which arrived a year later than planned – is specially designed for exploring “some of the most spectacular waters on the planet”.

The ship is also equipped with custom-built expedition equipment, including a fleet of Blueye underwater drones, kayaks and large inflatable explorer boats used for landings in otherwise inaccessible destinations.

Inspiration for the MS Roald Amundsen

In the forthcoming naming ceremony, the MS Roald Amundsen’s explorer heritage will be honoured by swapping the traditional bottle of champagne with a chunk of ice.

When Amundsen christened his famed expedition ship Maud in 1917, he crushed the ice against the vessel’s bow.

He is reported to have said: “It is not my intention to dishonour the glorious grape, but already now you shall get the taste of your real environment.

Hurtigruten CEO Mr Skjeldam, whose company was founded in 1893, said the same ritual will be used for its hybrid-powered cruise ship.

“With over 125 year of polar experience, Hurtigruten will use the first ever ship naming ceremony in Antarctica to pay our respects to our oceans, the environment and past and present explorers,” he added.

The company is also building MS Fridtjof Nansen, another vessel partially powered by battery that is due to debut in 2020.

It is reportedly also changing the diesel engines on at least six of its existing fleet to LNG, battery power and liquefied biogas (LBG) – which is produced from organic waste – by 2021.

How the shipping industry is harming the environment

While road vehicles and air travel grab the headlines as the biggest carbon emitters in transport, shipping can often go under the radar for its environmental impact.

Sound pollution, oil spillage and sewage can kill, harm or interfere with marine life – as can collisions with ships moving at high speeds – while liners also contribute to air pollution through the combustion of fuels that release great volumes of smoke and dust into the air.

Another potentially uncounted cost of the global industry is the impact it adds to the carbon footprint of other products through delivering them across the world.

Shipping is used to transport electronics, food and drink, materials and oil, for example.

In 2012, the International Maritime Organization estimated that Co2 emissions from shipping were equal to 2.2% of the global human-made emissions – and expected these to rise by between 50% and 250% by 2050 if no action is taken.

More than 100,000 transport ships are estimated to be at sea now, including 6,000 large container ships.

Growing alongside the logistics sector are cruise liners for leisure passengers.

In 2009, they carried 17.8 million passengers but this has grown annually to a projected 30 million people in 2019, according to the Cruise Lines International Association.