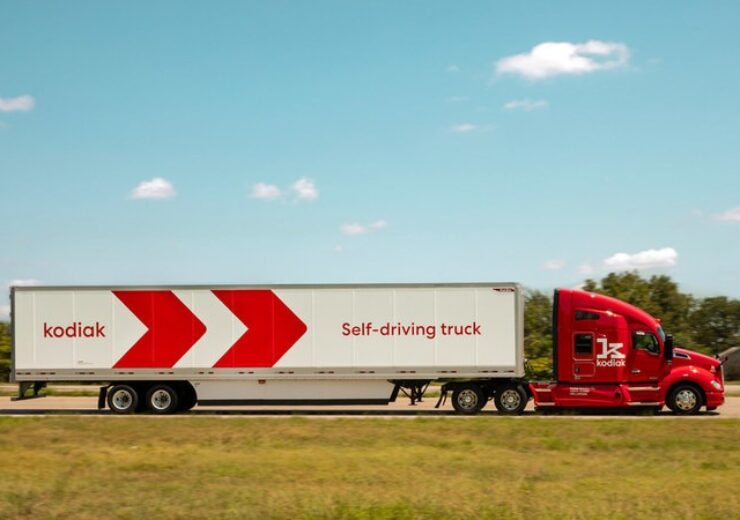 Kodiak Robotics, a California-based self-driving trucking company, has secured $125m in a Series B fundraising round.

Kodiak Robotics has so far raised a total of $165m for its autonomous technology. This includes $40m secured by the autonomous-vehicle start-up in August 2018 from Battery Ventures, CRV, Tusk Ventures, and Lightspeed Venture Partners.

The company’s other investors include Bridgestone Americas and BMW i Ventures.

Founded in 2018, Kodiak Robotics is engaged in developing and operating self-driving trucks designed for operating on highway routes with an aim to make the freight industry safer as well as more efficient.

The company has developed an advanced technology stack purpose-built solution called Kodiak Driver for long-haul trucks. The Kodiak Driver utilises a sensor fusion system and lightweight mapping solution to manage all the aspects of highway driving.

Kodiak Robotics founder and CEO Don Burnette said: “Our Series B drives us into hyper-growth so we can double our team, our fleet, and continue to scale our business.

“We have engineered our industry-leading technology, the Kodiak Driver, in half the time and a fraction of the cost of our competitors. The supply chain challenges we have seen over the last 18 months only underscore the importance of autonomous trucking to the future of America’s economy.”

Burnette added that the proceeds from the Series B round will be used for further fast tracking the launch of the company’s commercial self-driving service with its partners in the coming years.

During the next 12 months, the company also plans to double its workforce by adding at least 85 new personnel. Besides, Kodiak Robotics intends to expand autonomous service capabilities from coast-to-coast, and add at least 15 new trucks for a total of a minimum of 25 autonomous vehicles.

Recently, the company introduced its next generation autonomous trucks, which are said to use a modular and discrete sensor approach to simplify installation and maintenance, while enhancing safety.