Piers Morgan: “I wouldn’t run for Prime Minister because I couldn’t afford the pay cut” 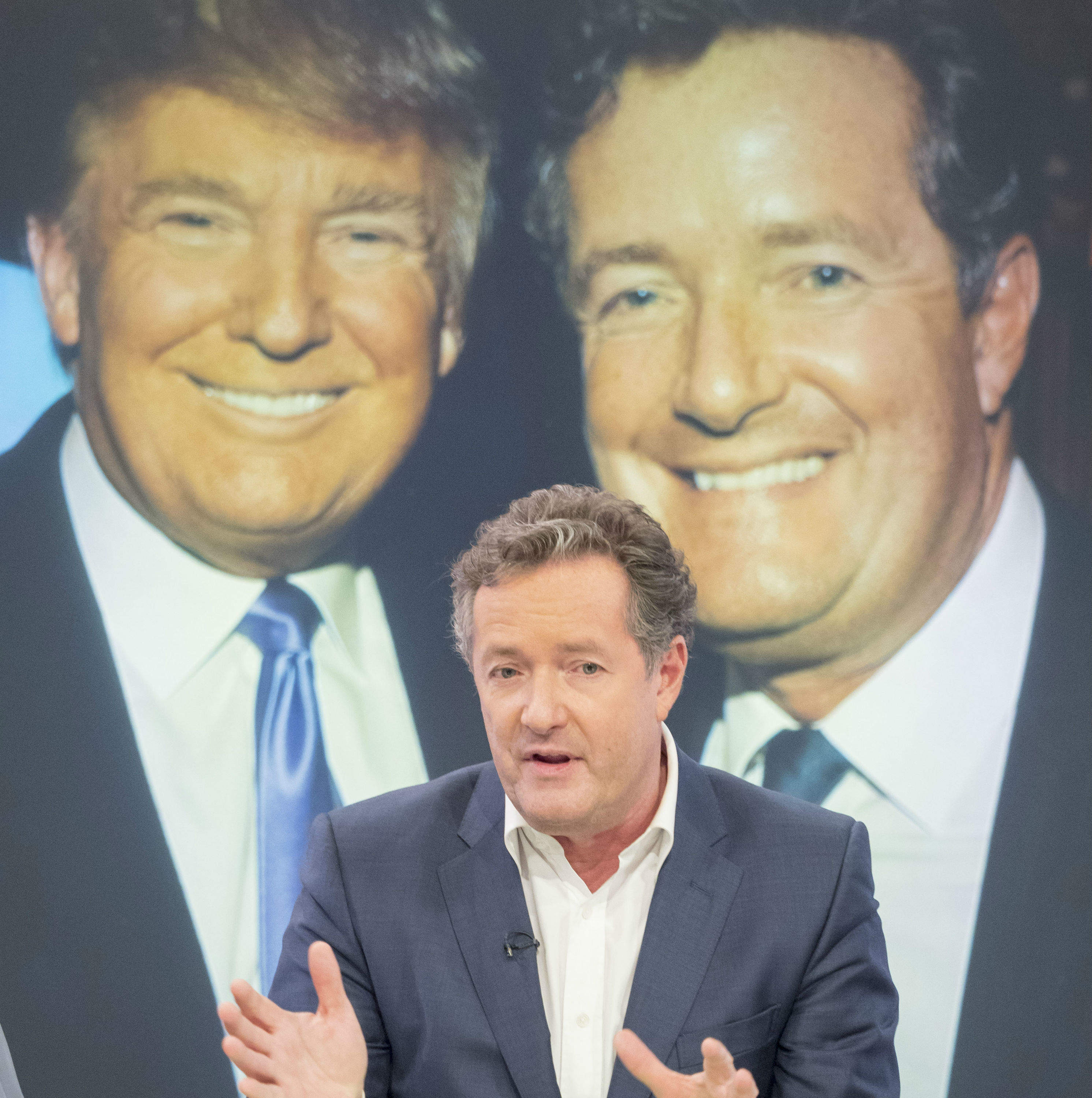 To say that Piers Morgan speaks his mind would be the understatement of the year.

“I’m always very happy to consider the 0.00% chance that I’m wrong,” he tells me when I ask if he ever doubts himself.

He speaks his mind, but that’s what makes him Piers Morgan, right?

We discussed late night calls with Donald Trump, why he would be a better Prime Minister than Theresa May and why our nation has “gone soft”.

Tell us about your friendship with Donald Trump?

Donald Trump is a really good friend of mine. I wouldn’t have voted for him because he’s not my politics, but a lot of what he is doing is really interesting. A lot of what he does is also deliberately provocative and inflammatory. The idea that this country wants to ban Trump but we will quite happily roll of the red carpet for Vladamir Putin and the King of Saudi Arabia and the President of China is utterly ridiculous. Trump is not the devil incarnate, can we all stop getting so hysterical about him? He is a tough, brash, controversial business guy. You don’t have to like him, but he is the President of our number one ally.

Would you say that you are close friends?

I’ve known Donald for ten years, yes we have late night chats. I met him on the Apprentice of course and was his boardroom advisor. Then I interviewed him on CNN maybe 35 times, and he would call me every few weeks for a chat about life and the universe. Those calls carried on throughout his campaign and there was a glorious moment some time in November when the phone rang and someone said to me when I answered, “I have the President of the United States here for you Mr Morgan.” I said “Donald! Bloody hell! You really are the President of the United States!” and it was quite a weird moment for us yeah. One of my very good friends who I have known for a long time is now the President of the most powerful country in the world, it’s so weird!

Does he thank you for supporting him?

He does thank me for sticking up for him. Donald Trump doesn’t send emails himself, he doesn’t do emails. But what he likes to do is he gets his staff to print out column and things which are supportive of him. They print it out for him and he handwrites on the print out. Then his staff will scan these and send it back to me. I have got about 50 or 60 of those. Just little notes from The Donald. They’re always great fun because they say things such as ‘Piers you’re my hero’ and ‘Piers you’re my champion’. Having the President of the United States calling me his hero and his champion is pretty great – there are worse things in life!

Will you be visiting him soon?

I’m going to go and see The Donald soon in The White House and it will be weird to see my old mate in the Oval Office. I think he will last the whole term and that he will do a lot better than people think. If people can just stop screaming for long enough then we can except that this is just a whole new way of doing things. He is not a politician, he is not trained as a politician, so he won’t behave like a politician. At the moment, 97% of those who voted for him say that they would vote for him again.

What about how anti-feminist Trump is?

All the women I know who go on about Trump and women love Bill Clinton and hate Donald Trump. Make your minds up ladies! Bill Clinton had sex with an intern in the Oval Office. On the scale of crimes against womanhood I would say that is quite a way up there! All I ever hear is “Bill, great President, loved him” and that Trump is ‘disgusting’.

Trump has a manner about him which rubs people up the wrong way. Bill Clinton is the most charming, brilliant guy I’ve ever met in politics. You meet Bill Clinton, he looks you in the eye, he remembers your name and he tells you incredible stories. I’ve stood with him and he’s been telling me a story with tears rolling down his cheeks because he’s so moved by his own story! He is the most incredible guy I’ve ever met and Trump is just very different.

Do you think a President should have Twitter? Surely he has more important things to be doing…?

Donald actually asked me if I thought he should stay on Twitter after being elected and I told him “yes!”. I’s brilliant. He said “you would say that because you tweet like me!” and that’s exactly it.

I like the thought of Donald waking up in The White House and firing off Tweets. It’s fantastically exciting and it gives people an insight into his Trump’s mind works. I love it!

Would you run for Prime Minister?

I’m so glad you asked me that! If I was Prime Minister I wouldn’t take an nonsense! But seriously, no, I wouldn’t run for Prime Minister because I couldn’t afford the pay cut. The politicians all talk like robots too. One of the reasons why Good Morning Britain has become more popular is because I just don’t talk like a robot. I just say what I think. Why is everyone so scared of opinion or debate?

My 19-year-old son who is at drama school kept saying to me, “Dad you’re misreading Corbyn. I’m telling you, he’s going to do a lot better than you think!” He rang my on polling day and said “Dad, I’m driving to Tooting to vote Labour and vote for Corbyn. And there’s nothing you can do about it! There is a movement, Father, and you haven’t spotted it!” I told him it was absolutely nonsense and that Theresa May would win by 100 seats. He rang me the next day and said “if only you had listened to me!” I’d love to be responsible for Nick Clegg’s exit from politics. I reminded the world that when it comes to cynicism, it doesn’t get worse than Clegg. I think all the students watched me on Good Morning Britain and said “right we’re getting you out son!”

What do your lawyers think of you? Do they say “no, not again Piers!” to you?

The ITV lawyers were a bit freaked out when I joined but I did point out to them that I spend 10 years at The Mirror. I do know the liable law very well. I had an MP threaten me at Good Morning Britain and he kept saying he would sue me and I said “go on then, where is the rip?” It never arrived. I know where the line is! It’s a delicate line that you learn after years of being a journalist at a high level. I’m not worried about people sueing me. They can come after me if they want!

What do you think about young people today?

This generation has no idea how lucky it is. It is the safest time to ever be alive. Fewer people are being killed now that any time in recorded history of planet Earth. People are living longer, they’re healthier. Let’s stop this thing where everyone is getting anxiety where they can’t operate. I read the other day that there are five times more drop-outs at University than ever before because people have anxiety. Grow up, man up and get over it! Apparently 34 million people in this country are mentally ill. That’s bullsh*t! Grieving is not mental illness. You’re all gonna have to grieve. I have had to do it many times in my life, it doesn’t make me mentally ill. It’s a normal reaction to life.

I think this has all gone way too far and now children are being so molly-coddled that they are always being told that there is something wrong with them. Encouraging young people to always feel vulnerable and that there is something wrong with them is ridiculous. We’ve gone soft! Toughen up! The new Millennium was when we all went soft. That was the trigger point. All this non-binary, gender-neutrality bullsh*t it all started. A friend of mine has a 15-year-old girl and one of her school friends said she has decided to be non-binary. Within two weeks, 8 more girls in the school year had jumped on the bandwagon. That’s utterly ridiculous! I’m sorry but no! I could say that I want to identify as a black woman, or an elephant. Whats happened to the British stiff upper lip? What’s wrong with men being men and women being women?

We have spoken to many of the world’s top influencers, across many different industries. Enjoy reading this? Then you can read more like this here –

“Brexit is the key”: An exclusive interview with Amber Rudd, our Home Secretary