Hydrogen fuel cell train: All you need to know about the French-made Coradia iLint 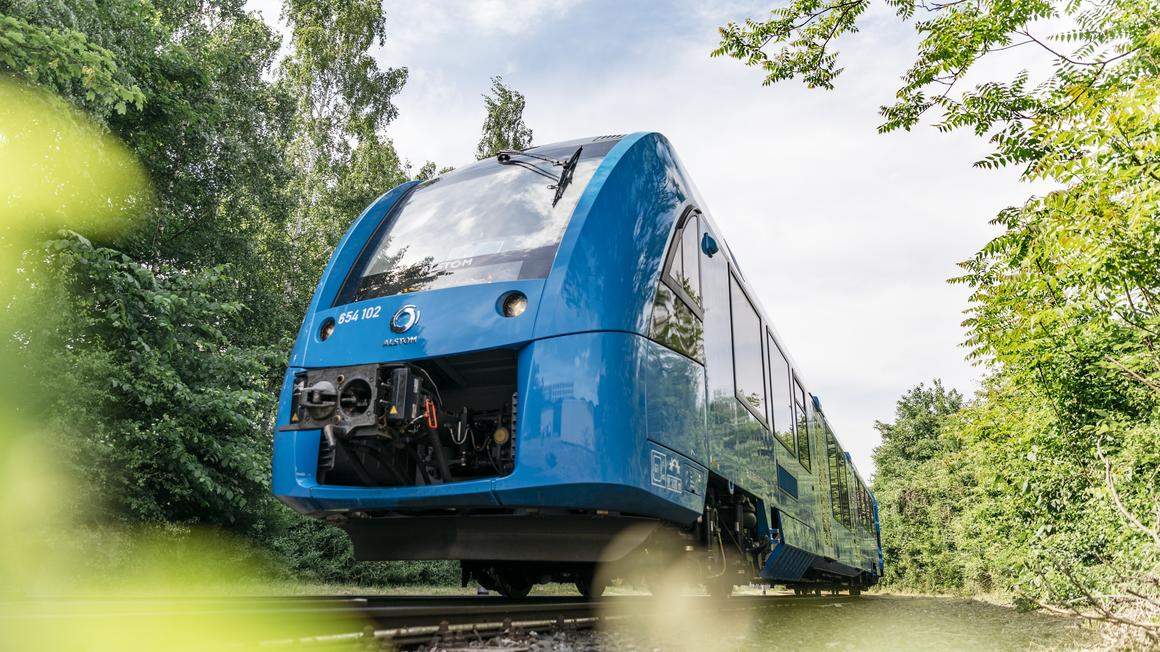 Lovers of noise-free journeys will be excited to learn that the world’s first hydrogen fuel cell train completed its maiden journey in the Lower Saxony region of Germany.

Built by French manufacturer Alstom, the extremely quiet Coradia iLint can reach speeds of 87mph using fuel cells that convert both hydrogen and oxygen into electricity, a process that produces only a trace amount of emissions for the otherwise emission-free vehicle.

Its launch yesterday (16 September) marked the first of 14 hydrogen fuel cell trains to be delivered by Alstom in the area as part of its contract with the local transport authority – which also requires the company to provide 30 years of maintenance and energy supply.

Chairman and CEO Henri Poupart-Lafarge said: “This is a revolution for Alstom and for the future of mobility. The world’s first hydrogen fuel cell train is entering passenger service and is ready for serial production.

“The Coradia iLint heralds a new era in emission-free rail transport. It is an innovation that results from French-German teamwork and exemplifies successful cross-border co-operation.”

Originally announced at the InnoTrans 2016 event – an international trade fair for transport technology – the Coradia iLint can travel between 370 miles and 500 miles on a full tank of hydrogen at speeds of up to 87mph.

The route comprises nearly 62 miles of railway running between Cuxhaven, on Germany’s north coast, and Buxtehude, near Hamburg, replacing the existing diesel fleet currently catering to the region.

The new fleet will be fuelled at a mobile hydrogen filling station at Bremervörde station, located between Hamburg and Cuxhaven, where hydrogen gas will be pumped into the trains from a 40ft-high steel container next to the tracks.

“The emission-free drive technology of the Coradia iLint provides a climate-friendly alternative to conventional diesel trains, particularly on non-electrified lines.

“In successfully proving the operability of the fuel cell technology in daily service, we will set the course for rail transport to be largely operated climate-friendly and emission-free in the future.

“The state government of Lower Saxony is proud of putting this trendsetting project on the track.”

The Coradia iLint will be assembled at Alstom’s plant in the city of Salzgitter, west of Berlin, as part of the company’s Coradia LINT range – a selection of trains which come in diesel, part-electric and hydrogen versions.

The range was designed by Linke-Hofmann-Busch (LHB) – a German manufacturer acquired by Alstom in 1996.

Four other Coradia LINT models are already in use today, with the first being the LINT 27, which runs on 315 kilowatt (KW) engines and can reach a maximum speed of 75 mph.

The train operates primarily on non-electrified railways and has just 83 seats, but up to three can run together in multiple unit form – where three single unit trains are joined and run by a single driver.

The second in the range are the LINT 41 and LINT 54, both of which consist of two cars, run on 315KW engines and can seat up to 180 passengers.

While they are mainly used in Germany, other European countries such as Denmark and the Netherlands have introduced them to their rail systems.

Alstom also delivered six LINT 41 and LINT 54 trains to Ottawa, Canada, in 2015, for use on the O-Train Trillium Line.

The Coradia LINT range also includes the LINT 81, which comprises three carriages and a total of 270 seats.