Here Mobility: The ‘Google of the mobility world’ taking on Uber in integrated transport 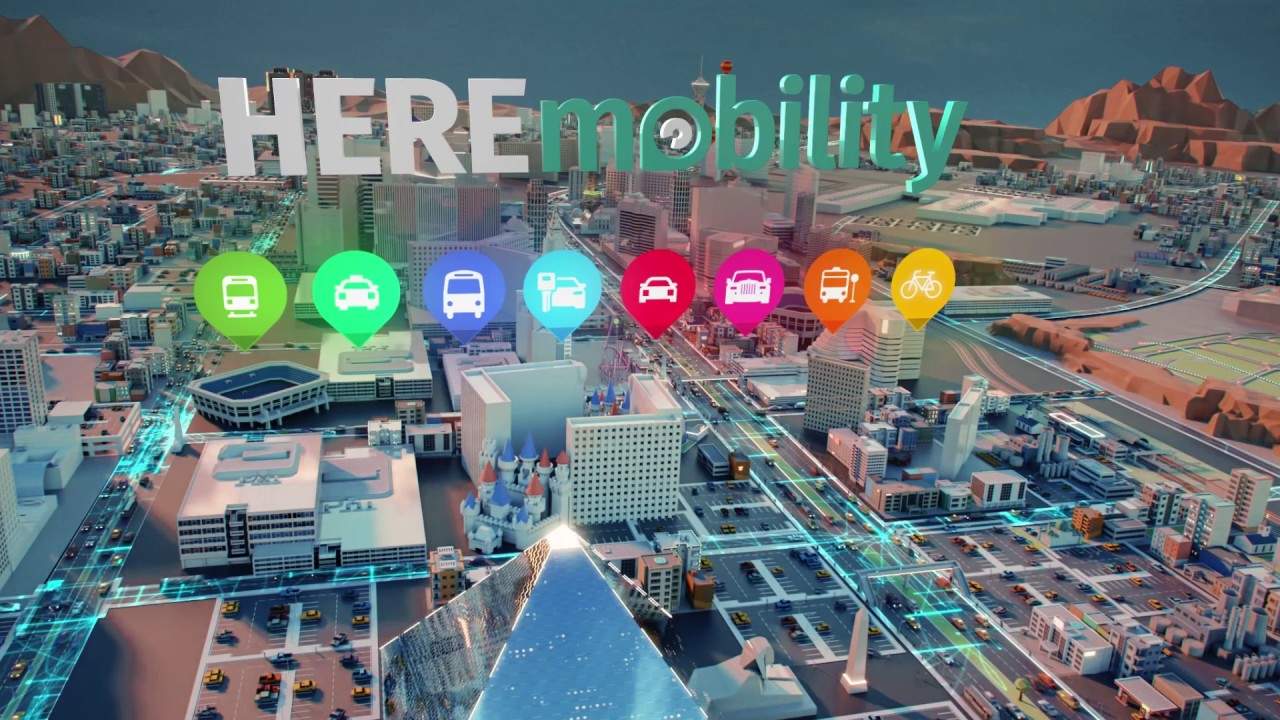 Mobility is the next huge economy, bringing together various forms of transport and services like car and bike-sharing. The problem is that a handful of companies like Uber are gaining a monopoly, but Here Mobility aims to loosen its grip by opening up the marketplace through tech. Its boss Liad Itzhak explains how it works to Dan Robinson

Walk down any residential street and almost every home will have a car parked outside. Maybe even two, three or more vehicles.

In the US, more than nine in ten households owns a vehicle of some description in a country where 85% of people drive to work every day – only 9% of those carpooling with someone else.

At the end of March this year, there were 37.9 million registered vehicles in the UK – more than half the 65 million population.

So many people rely on having their own cars but one day, they might not be so necessary.

Already, we are seeing cities invest hundreds of millions into cycling networks and public transport upgrades in a bid to get a rising population to leave their cars at home.

But there’s also been huge strides made in mobility-as-a-service (MaaS) – a concept that describes the shift from personally-owned models of transportation towards shared mobility solutions.

Plenty of services are now popping up, from car-hiring apps like London’s ZipCar and France’s Virtuo to bike and scooter-hiring platforms including China’s Ofo and Lime – an American company now making inroads into the European market.

It’s a $200bn industry (£150bn) but is predicted to rise to $1.5tn (£1.13tn) in 10 years’ time, according to Liad Itzhak, senior vice-president and head of Here Mobility, a new on-demand transport and mobility services platform.

He says: “MaaS only started about seven years ago but is already a huge market that’s exploding very quickly.

“It helps us move around in a much more convenient way – safer, cheaper and better connected.

“The idea of mobility is it’s a more holistic way of moving around a city than you do with conventional transportation, including things like bike and car sharing.

“When you look at the problems of moving around, cities need a more holistic approach.

“Right now they’re focusing on solving the traffic or parking problems but these aren’t the issue – it’s the inefficient movement in the open area.

“Once you realise this is the problem, you can start to build the solution, which is to change behaviour in the open area movement.

While the concept of mobility-as-a-service is a democratic one, the signs suggest it will be anything but once it really takes off.

Perhaps the most well-known company at the heart of it is Uber, the San Francisco-based taxi app giant, that posted a $7.5bn (£5.7bn) turnover in 2017.

This will only continue to grow as it strikes deals with rivals in other countries to maintain monopolisation in the ride-hailing market.

In China, Uber merged with its main rival DiDi in 2016 – a move that resulted in taxis becoming more expensive and harder to find.

The trend has only accelerated in 2018, with Uber investing $225m into a joint venture with Russian firm Yandex in February to create a $3.38bn behemoth of the ride-hailing world.

The companies combined their operations in 127 cities across Russia, Armenia, Azerbaijan, Belarus, Georgia and Kazakhstan as part of the deal.

Singapore has since proposed fines on the two companies and suggested they sell their car-leasing businesses, while Malaysia is bringing e-hailing drivers under regulations previously reserved for conventional taxi drivers.

It doesn’t stop there, as just days after the Uber-Grab deal it was revealed that Uber was in talks to merge its Indian operation with that country’s rival Ola, having been embroiled in an expensive battle to dominate the Indian market since 2013.

Seemingly one of the only markets where it still has an established rival to compete with is in its own backyard, with Lyft a major foe in the United States.

And it’s not just in the ride-hailing space where Uber is in full-blown M&A mode, as it has taken over or invested heavily in a number of other mobility services in recent months, including Lime and Jump.

These services have been integrated into the Uber app, while the likes of Grab, DiDi and Ola have launched their own bike-sharing schemes.

For Liad, a distinct lack of competition in mobility is a huge concern, as he says: “Although it’s a huge market, there are only a select few players in control of it.

“This is how the mobility eco-system is being built. It’s a very concentrated market and the big promise of efficient movement isn’t really happening.

“There’s no space for other companies who can offer variety to services because they can’t compete with the big ones, and that lack of variety means we can’t offer efficiencies.”

He highlights New York as an example, where the number of yellow cab drivers is capped at 13,600, while the number of drivers affiliated with ride-hailing apps – mainly Uber – has ballooned to more than 60,000 and created more congestion.

“It’s only the start of it because today’s market is only 10% of what it will be in 2030. By that time, we will see a few huge players and the rest of the market will disappear – like in New York, we see taxi companies disappearing.”

Building a competitive mobility eco-system is the mission for Here Mobility, a new business launched in January by Here Technologies – the 33-year-old Nokia-owned firm with 9,000 staff that provides mapping and location data services.

To achieve its stated aim, it has set about creating a mobility marketplace that brings together a wide range of fragmented transportation services, including public transport, taxis, car-sharing, air travel and rental companies.

Often, access to the services on offer is only through their respective apps, while established providers sometimes suffer from a technological gap with more recent entries.

The Here Open Mobility Marketplace is billed as a one-stop shop platform for smart, social and scalable mobility services.

For service providers, it offers an opportunity to reach new customers through increased exposure, while consumers can gain access to greater choice and easier accessibility.

It works as a software package that serves as a central hub for supplying and requesting mobility services – with businesses of any size able to offer multiple transport options for customers.

Here’s tech wizardry is found in its Mobility Dispatch system, a fleet utilisation and optimisation tool based on algorithms that can predict demand.

Liad hopes the platform can harness the “true freedom of mobility”.

He says: “We want to open up the market to bring together supply and demand into one place,” he says.

“It gives a platform for all the different mobility service providers to offer their goods to get from A to B.

“We’re very open to anyone worldwide who wants to buy into this movement in the marketplace.”

In little over half a year, Here Mobility has already been rolled out in more than 150 cities worldwide, with Europe a core market but North and South America growing fast.

More than 50,000 vehicles and drivers are signed up, giving it an inventory comparable to what Uber collected in its first six years after launching in 2009, according to Liad.

“The adoption of this idea is happening very fast,” he says.

“There are hundreds of companies with different fleet sizes that have joined us, from those with just a few dozen vehicles to others with thousands.

“Our neutrality is very important and we welcome everyone who wants to join our marketplace. We’re not a supplier – we don’t own cars and never will.

“What we provide is the API (application programming interface) and tools to connect the marketplace.”

Here Mobility’s marketplace could open up opportunities for local companies to reach an international customer base, believes Liad.

The company is working with numerous corporate clients to either integrate its mobility platform into their current operations or enrol them on to a new system, which will soon feature a mobile app.

It will display ride requests to which they can respond, effectively putting those companies in charge of their own transport fleet.

“It can make a real difference by giving these companies a global reach because a lot of the time, the supply is local but the demand is global,” says Liad.

“Airlines really want to provide the door-to-door solution for customers but it’s very difficult for them because they operate in many different cities with different service providers, so it’s a big headache to provide this service.

“But they could now do that by tapping into our marketplace to reach suppliers globally.

“Hotels will also join and offer services in places like the lobby so guests can order taxis. It might also be integrated into their website so when you book a hotel, you also book your ride there.

“From the user’s point of view, they might experience the marketplace contextually and not necessarily through our own app because to democratise it you have to not only democratise the supply side, but the demand side too.

“We want to provide many different processes and integrate the marketplace into these companies’ own services – we don’t need exclusivity with user experience.

“We just want the user to move around the world in a very free and efficient way.”

The lightning-quick take-up of Here Mobility’s concept is suitably reflected in its rapid growth behind-the-scenes.

When the company was first set up in June 2017 ahead of its launch, there were 26 staff but now there are more than 200 people on its payroll – a number that continues to grow at its Tel Aviv head office.

“In Israel, we can attract very good candidates to be part of this vision and team,” says Liad.

“It’s a very unique team and the quality of people is very unusual. That’s why we can bring in people from Google and Facebook.

“Competition is fierce for talent but we’re growing very fast.”

Liad says that analysts have predicted Here Mobility has the potential to be the “Google of the mobility space”.

For someone who has worked at the search engine giant – between 2010 and 2016, he was head of data, map quality and quality assurance at GPS software provider Waze, which was bought by Google in 2013 – he can see the potential of his current project.

He adds: “We can see comparisons with how the internet looked 20 years ago and what mobility looks like today.

“What Google did for the internet, we’re doing the same with supply and demand.

“We provide the tools and analytics to the suppliers, just as Google did to website owners.

“We certainly have the potential to become the Google of mobility.”