Ford Motor to invest $22bn in electrification of vehicles through 2025 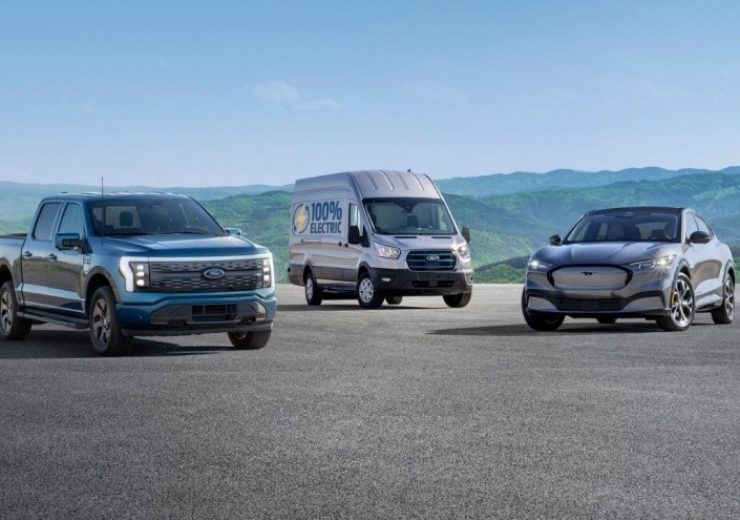 Ford Motor said that it is investing $22bn through 2025 in the electrification of Mustang pony car, F-150 pickup truck, and Transit van.

The automobile company plans to include many more models in the years ahead in its electrification plans.

Ford Motor’s all-electric Mustang Mach-E is already in the market since late 2020 and is currently available for ordering. The company said that the SUV is equipped with the latest technology and integrated with over-the-air Ford Power-Up software updates.

On the other hand, the E-Transit is the all-electric variant of its Transit van which will be launched later this year.

According to the company, the E-Transit is a smart and connected van. It will equip fleet owners with technology solutions such as high-speed in-vehicle data architecture and cloud-based services for providing new ways to streamline the performance of the fleet.

Ford Motor has set a target of spring 2022 for bringing the F-150 Lightning electric truck to the market. Production of the F-150 Lightning is taking place at the $700m Rouge Electric Vehicle Center in Dearborn, Michigan, which was recently visited by US President Joe Biden.

F-150 Lightning is planned to provide a range of connected, intelligent features that can be enhanced over time through over-the-air software updates.

Apart from the Rouge Electric Vehicle Center, the company has three more plants in North America for manufacturing electric vehicles.

Ford Motor stated: “This electrification strategy is a core component of Ford’s goal to achieving carbon neutrality globally by 2050.

“Ford is the only full-line U.S. automaker committed to doing its part to reduce CO2 emissions in line with the Paris Climate Agreement and working with California for stronger vehicle greenhouse gas standards.”

The company said that its public charging network comprises more than 63,000 charging plugs.

Earlier this year, the American automotive company pledged to sell only electric cars in Europe by the end of 2030. To support its plan, the company is investing in a $1bn modernised vehicle assembly facility in Cologne, Germany.

In 2019, Ford Motor had invested $500m in Rivian, an electric vehicle startup, to develop an all-new, next-generation battery electric vehicles by using the latter’s skateboard platform.

The company will also use Volkswagen’s Modular Electric Drive architecture for developing another all-electric vehicle for the European market starting from 2023.

Apart from that, the US carmaker is investing to expedite research and development of battery and battery cell technology.