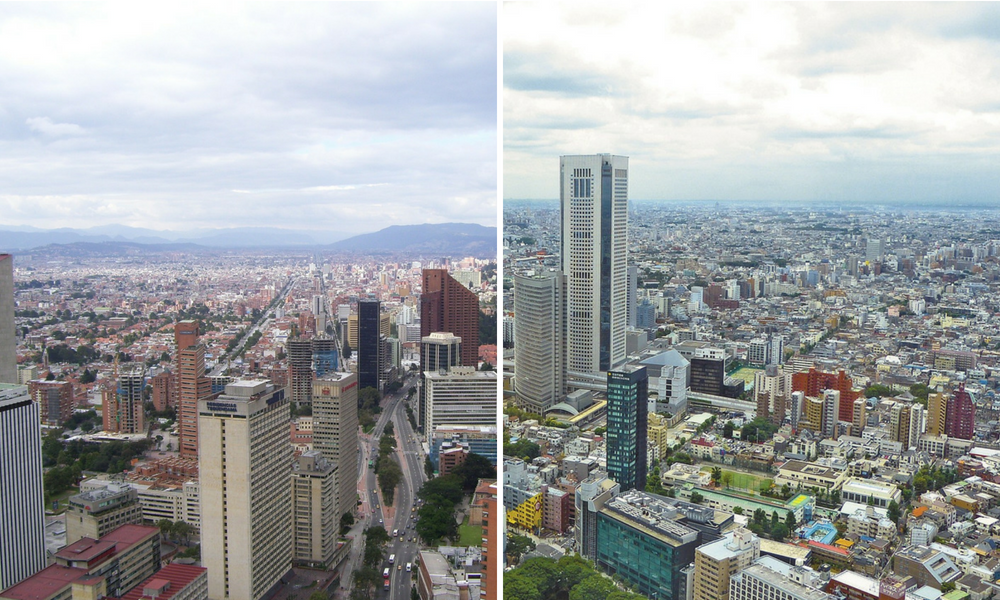 Bogota, in Colombia, pictured on the left opposite Japan capital Tokyo

Colombia v Japan is the lunchtime clash today (19 June) in the Mordovia Arena for the first Group H game of the 2018 Russia World Cup.

Despite the impressive line-up, Japan is slated to lose the tie by the Google probability calculator – which suggests that Colombia have a 51% chance of winning the match.

Yet the South American dream team have failed to put away two minnows – Egypt and Australia – in its last two friendlies, being held to goalless draws on both occasions.

Heading into a game that is far from in the bag, Compelo takes a look at how the economies of Columbia and Japan compare with each other.

Japan has a population roughly triple that of Colombia. More than 127 million people reside in the storied Asian nation, while just over 49 million people have made a home in Colombia, according to UN World Population Prospects data.

The population of the Japanese capital Tokyo sits at nine million. Eight million people live in Bogotá, Columbia – putting it surprisingly close to its Japanese counterpart.

The Japanese economy is one of the largest in the world – and their citizens some of the most overworked.

Official export data compiled by the Observatory of Economic Complexity put crude petrol as the largest Columbian export in 2016 – accounting for 25% of the country’s exports, making the country a little over $8bn (£6bn).

The largest export of the home of Honda and Toyota was cars. They made up 15% of Japanese exports in 2016 and netted the island nation $101bn (£77bn).

Japanese companies are well represented on the Forbes Global 2000 list of the world’s largest firms.

The top Colombian company on the list is the oil and gas provider Ecopetrol – coming in at rank 300 with roughly a quarter of Toyota’s market value.

The chief executive of Softbank Masayoshi Son is the highest ranking rich man on the Forbes billionaires list – which estimates his net worth to be $22.7bn (£17.3bn).

Luis Carlos Sarmiento, the richest Colombian, is not as wealthy as his Japanese peer but still has a net worth of around $12bn (£9.1bn) coming from holdings in banks.

Japanese unemployment was incredibly low in 2017, sitting at 2.7% according to the data website Statista.

Unemployment in Colombia was roughly quadruple that in the same year, sitting at 9.1% of the available labour force.