Brazil v Mexico is bound to be one of the most exciting ties of the 2018 Russia World Cup - but few doubt Brazil will be bested by their Central American opponent. James Walker has checked if the economic balance between the countries is as one-sided as the teams perhaps are on paper 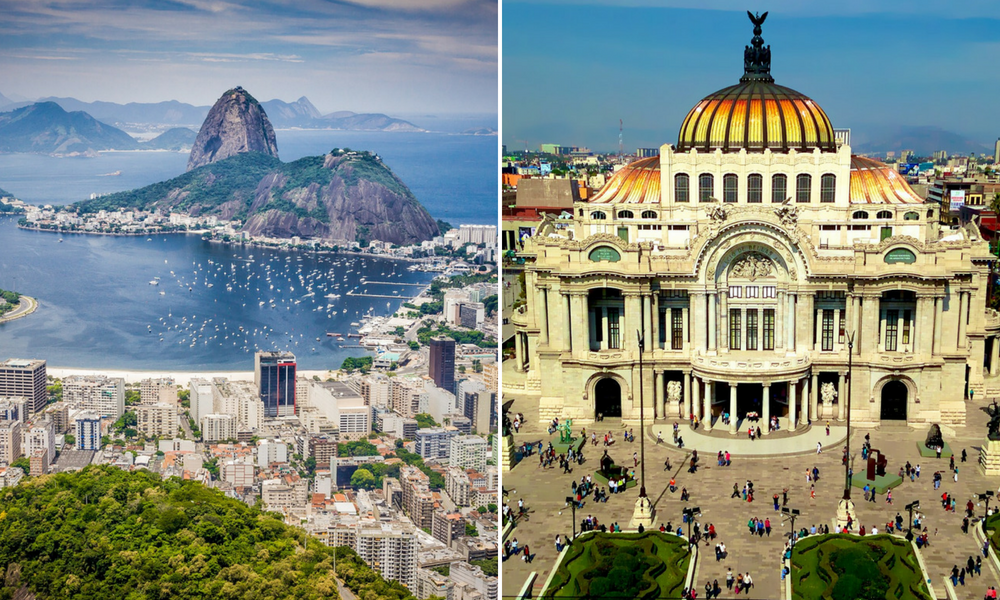 Brazil v Mexico will need to live up to high expectations this afternoon – following a weekend of dramatic 2018 World Cup matches that saw favourites Portugal, Argentina and Spain knocked out of the tournament.

Five-time World Cup winners Brazil are going into the tie as clear favourites.

The Google win probability counter has their chance of progressing at 65% and the betting company William Hill puts their odds of lifting the trophy at 7/2 – making them joint favourites to win the tournament alongside France.

There are also 13 places between the sides in the Fifa rankings – which place Brazil as the second greatest team in the world.

But after their 7-1 defeat against Germany at the 2014 World Cup, and an impressive showing from Mexico in a tough group, it is by no means certain that the South American icons will move on to the quarter-finals.

Compelo checked if the World Cup opponents compared the same way in the economy as they do on the pitch.

Brazil has roughly eight times the land mass of Mexico and 80 million more residents, powering its status as one of the most attractive emerging markets.

According to the 2017 UN World Population Prospects report, more than 210 million people live in Brazil, while 130 million or so have found a home between the borders of its Central American rival.

Yet hub city of the 2014 World Cup Rio de Janeiro has two million less people living within its mixture of prime real estate and favelas than Mexico City – which boasts of a population just below nine million.

It should come as no surprise that Mexico drums up less cash from goods and services than its better populated opponent.

World Bank data shows the home of the Aztec civilisation produced $1.15tn (£880bn) from goods and services in 2017, while Brazil almost doubled that amount, making just over $2tn (£1.52tn) that same year.

But Mexican workers produced more per head than their Brazilian peers.

As is the case with its neighbour Argentina, soybeans are the largest export market of Brazil, according to the Observatory of Economic Complexity.

Hundreds of miles north in the country neighbouring America, cars were the largest export market of Mexico that same year, accounting for $34bn (£25.90bn) of its far larger export market – which made the country a whopping $394bn (£300bn) in total.

You will have a far easier time finding Brazilian companies in the top quarter of the Forbes Global 2000 list than you will Mexican firms.

Banking giant Itaú Unibanco Holding is the highest ranking Brazilian company on the list of the world’s 2000 largest public firms – coming in at number 45 with a touted $87bn (£66.3bn) market value.

The closest Mexican competitor you will find on the list is the Latin American telecoms company América Móvil – lagging at rank 329 with a market value of $57.8bn (£44bn).

Brazilian investor Jorge Paulo Lemann is the richest man in the country, according to the Forbes billionaires list.

Lemann is sat on a net worth of $27.4bn (£20.87bn) largely thanks to canny investments in the brewer Anheuser-Busch InBev – which owns the Fosters brand of larger since its acquisition of SABMiller.

The net worth of the man who controls Mexican telecoms firm America Movil is more than twice that size of his Brazilian peer – valued at $67.1bn (£51.11bn).

Far too much of the Brazilian populous has to suffer unemployment.

According to the CIA World Factbook, some 13.1% of the working age Brazilian labour force was jobless in 2017 – thanks in large part to a damaging recession.

Mexico fares far better on unemployment by comparison. The Factbook estimates that just 3.6% of would-be workers were out of employment in 2017.