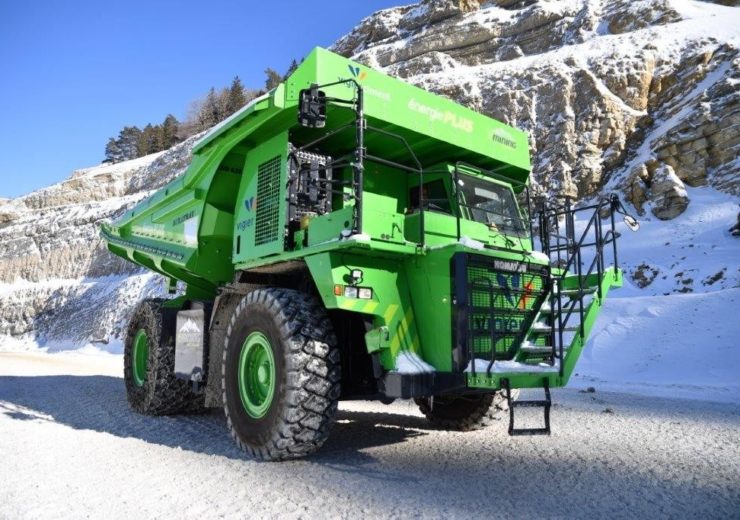 The electric dump truck was developed by the Kuhn Group as part of its e-mining operations (Credit: Kuhn Gruppe)

The 45-tonne Elektro Dumper claims the title for the world’s biggest electric vehicle — and the mine workhorse’s battery never needs recharging.

The heavyweight vehicle is based on the Komatsu dump truck and is cable of carrying 65 tonnes of rocks and rubble at speeds of up to 25mph.

The battery alone weighs 4.5 tonnes and has 600 kilowatt-hours (kWh) of battery storage — the equivalent of six Tesla Model S cars.

The electric vehicle was developed in conjunction with Bern University and cost $1m to build.

It has been working on a mining site near Biel, Switzerland, where it hauls lime and marlstone down from a quarry at the top of a valley 20 times a day.

How the biggest electric vehicle recharges itself

The e-Dumper uses a regenerative braking system, which harvests the kinetic energy created when braking on the downhill stretch of its route. This would normally go to waste as heat, but the dump truck transforms it into electric energy to power the return climb up the hill.

The highly-efficient vehicle can produce more energy than it requires to operate, with additional power being delivered to the grid.

Over the course of a day’s work, it can be expected to produce an additional 200 kWh of extra energy.

Regenerative braking systems are used in electric vehicles, electric bikes and some e-scooters.

The Kuhn Group’s eMining team said: “The electric drive carries key advantages for these journeys — instead of heating up the brakes during the descent, the gigantic electric engine acts like a generator recharging the battery pack

“The empty truck then uses this energy to travel back up the hill. If all goes as planned, the electric dumper truck will even harvest more electricity while travelling downhill than it needs for the ascent.

“Instead of consuming fossil fuels, it would then feed surplus electricity into the grid.”

It is estimated that the truck will prevent 130 tonnes of CO2 from being released into the atmosphere per year, based on the fact that similar trucks would burn through 50,000 litres of diesel annually.