Apollo 15 mission pilot Al Worden is one of a select group to have experienced life in space. Using his unique insight, he has shared opinions on where future missions should concentrate their efforts 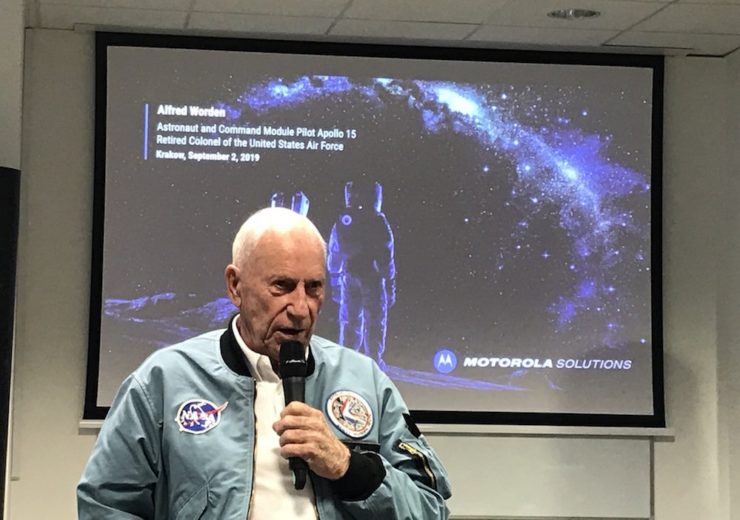 As one of only 24 people to have flown to the Moon, Al Worden has a unique perspective on what humanity’s next step should be as we contemplate further exploration of the cosmos. Attending an event at Motorola Solutions’ Krakow Innovation Center to celebrate the 50th anniversary of the first Moon landing, the former astronaut revealed his thoughts on the future of space travel.

It’s been 47 years since a person last stepped foot on the Moon.

Although the likes of India, Japan and China have posted their own efforts to land craft on its surface, the US remains the only nation to have set a man on the Moon.

Al Worden has a personal urge to return to it but he doesn’t think there is much need for us to go back just yet.

“The Moon really means nothing to us,” he says.

“There are a lot of people thinking about putting settlements on the Moon and that’s bullshit – there’s nothing there.”

The Moon’s role in the future of space travel

The Apollo 15 astronaut believes there are only two reasons for returning to Moon following the scientific discoveries already made on previous missions.

“The number one thing to do is to build the largest radio telescope you can imagine on the dark side of the Moon,” he says.

“From there it could look out at the universe without any atmosphere obstructing its view.

“With one sixth gravity there, it would be easy to build and we could find out things from the universe that we’ve previously been trying to find out from Earth while looking through the atmosphere.”

The second would be to use the Moon as a testing ground for astronauts.

He explains: “We could put a crew up there for six months and use the Moon as a proving ground to see what it’s going to take to live in a harsh environment.”

There have been discussions that the Moon could prove a useful jump-off point for any  mission to Mars, as the reduced gravity could make a launch easier.

The former administrator of NASA Michael Griffin even suggested the Moon could house settlements and act as a stepping-stone on the way to the red planet.

But Worden questions the logic: “The Moon is not a good place to go to Mars from.

“If you’re going to go to a lower gravity site to launch tomorrow, why not go to zero?”

The difficulties with getting to Mars

The current attention has moved from exploration of the Moon to Mars.

Worden believes that continued space exploration is vital to the future of humankind, but taking the next step to a new planet could be 30 to 40 years away.

He says: “We do not have a solution for some of the problems we know we will have going to Mars.

“Solar radiation is going to be a big problem and we don’t know what it will do to people on board a Mars mission, which could take a year and a half.

“There’s a lot of concern that the radiation is going to be heavy enough that the astronauts would have a hard time getting back.”

Private investment in space travel is attempting to speed up this process, most notably through the efforts of Elon Musk’s SpaceX and Jeff Bezos’ Blue Origin — which both have their sights set on Mars.

However, Worden claims he is “not sure they really understand the serious issues we’re going to have to face up to going to Mars”.

He adds: “Mars is going to cost a lot of money. I don’t see any one country doing it on their own.”

While the Apollo Moon missions were couched in the context of the Cold War and a space race between Russia and the US, any mission to Mars would require a collaborative approach.

Worden says: “I think it’s going to take everybody in the world adding their expertise to whatever is going into that programme to make it successful.

“I know as an example, a country like the United Arab Emirates has a space programme.

“They’re aiming to put a satellite around Mars and they have some critical technology that’s going to be helpful to any bigger programme.

“Every country in the world is going to have a chance to contribute to a programme that will get us to Mars and I think that’s the only way we can go — cooperation is the name of the game.”

When it comes to the question of who should pilot any future Mars mission, the 87-year-old believes there is only one person for the job: “I think they should send me”.