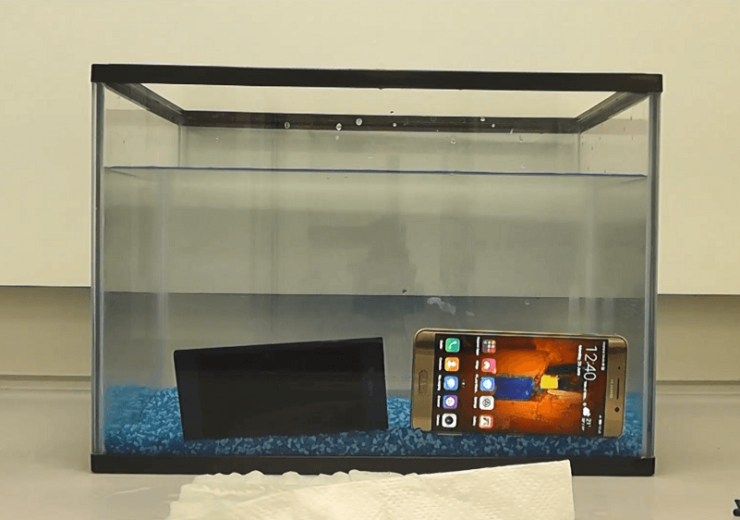 Two mobile phones after 10 minutes submerged in a water tank. The one on the right has been treated with P2i's Dunkable coating solution, while the other hasn't

Water seeping into a mobile phone might not have to spell the end for handsets anymore as new protective coating technology was launched.

Liquid protection expert P2i says its Dunkable waterproofing solution enables a smartphone to operate normally even when the outer case has been breached and it has been fully submerged for long periods.

It claims the interior coating, which is customised for particular devices and protects all the core components such as electronics inside a phone, is the most advanced on the market.

The Oxford-based company will give the first demonstration of the innovation at next week’s Mobile World Congress in Barcelona by dunking Dunkable-treated handsets in water tanks.

P2i CEO Ady Moores said: “Dunkable is a world-first and represents a step change in the level of waterproofing available to handset manufacturers.

“The launch means that for the first time, original equipment manufacturers (OEMs) have access to the most advanced water protection capabilities that can be rolled out on virtually all form factors – not just the usual square designs.

“Its launch marks the next generation of ‘Protected by P2i’ products, where we will have the ability to treat over half a billion smartphones in 2019 alone.”

The coating is said to be inert and doesn’t degrade through impact, heat or “environmental stress” – or when in contact with solvents.

The coating can protect a smartphone to IPX8 level for the life of the device, says the company.

This is a variable waterproofing grade agreed between a manufacturer and the International Electrotechnical Commission (IEC), but typically means devices can survive for longer than 30 minutes at a depth of more than 10ft.

According to P2i, mechanical seals currently used to protect handsets to IPX7 and IPX8 levels only act as a barrier to water, allowing devices to be short-circuited if water enters via a cracked screen or de-laminated seal

They also use space that could accommodate larger batteries, which will be essential for managing the power demand of 5G modems.

In a statement, the company added: “Dunkable enables handset manufactures to create a competitive edge through bold, flexible designs that are thinner, foldable, or have smaller bezels – without compromising the water protection.”

P2i will initially target Dunkable at smartphones but the technology is also applicable to tablets, wearables and consumer devices, as well as industrial systems.

The first mobile protected by the coating is expected to be released this year, although its identity has not yet been revealed.

Water damage in mobile phones one of consumers’ biggest concerns

Recent surveys have placed waterproofing and durability among the top of consumers’ demanded features on a smartphone.

Research by market analyst Canalys also shows the average handset lifespan will rise by 16% in North America and 5% in Europe and the Asia-Pacific region between 2017 and 2022.

P2i said this is due to increasing handset costs, rising environmental awareness among consumers – but this trend means more robust and longer-lasting waterproof features are “paramount”.