MIT researchers have woven electronic devices into fibres that could be used in wearable smart fabric technology, such as bandages that monitor wound healing and wristbands measuring blood oxygen levels 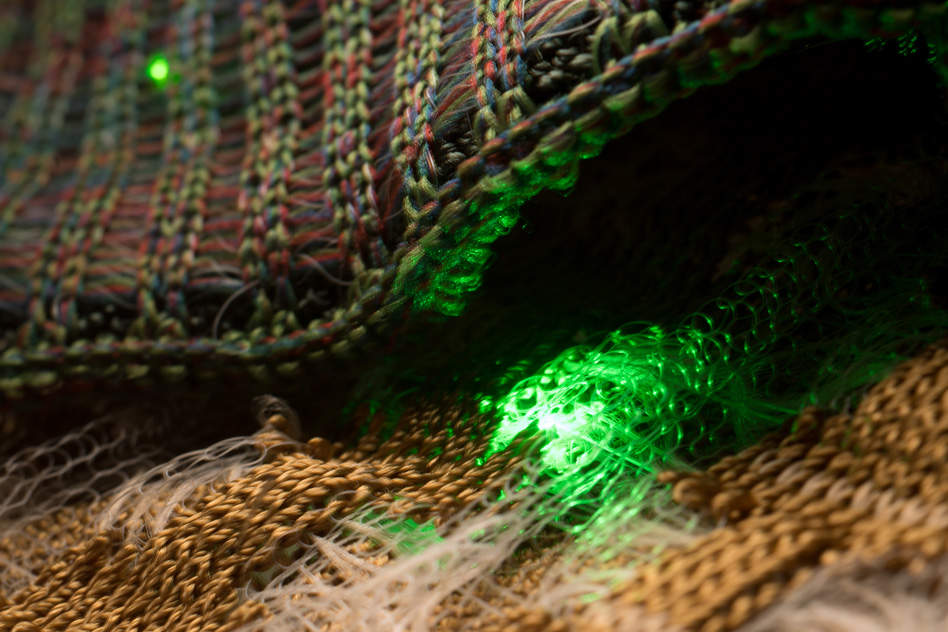 High-tech bandages that monitor how wounds heal and blood oxygen-measuring wristbands could soon be worn by patients after new smart fabric technology was trialled.

The light-emitting diodes (LEDs) used to communicate results were each the size of a grain of sand, while the copper wires were smaller than a hair’s width and the fabric remained soft and washable.

Former MIT graduate student Michael Rein and materials science professor Yoel Fink have set their findings out in a paper published by the journal Nature this week.

“We are anticipating the emergence of a ‘Moore’s Law’ analogue in fibres in the years ahead.

“It is already allowing us to expand the fundamental capabilities of fabrics to encompass communications, lighting, physiological monitoring and more.

“In the years ahead, fabrics will deliver value-added services and will no longer just be selected for aesthetics and comfort.”

The Moore’s Law theory suggests that the capabilities and availability of the smart fabric technology could grow quickly as a result of the breakthrough – in a similar fashion to microchips.

Smart fabric tech could be here within a year

Prof Fink added that the technology could be incorporated into commercial products by 2019.

He also said the innovative tech could also have applications for national defence.

The US Department of Defense is apparently looking at how “men and women in uniform” could use the wearable technology.

MIT suggested the fibres could even be used in the medical field, were it to be woven into high-tech bandages to monitor the healing of wounds or wristbands for measuring blood oxygen levels.

The university, based in Cambridge, Massachusetts, also heralded the breakthrough as “the achievement of a long-sought goal of creating smart fabric technology” because the fibres used semiconductor devices that are central to modern electronic devices.

“We are right now in the process of transitioning the technology to domestic manufacturers and industry at an unprecedented speed and scale.”

To test how the wearable smart fabrics would withstand water, researchers put the photo-detecting fibres they had developed into a fish tank.

Researchers transmitted classical composer Handel’s “Water Music” through the tank using a lamp outside that transmitted the song through light pulses.

The fibres translated the signals into music and managed to function in water for weeks, according to MIT.

Researchers also put its the fabrics through the wash 10 times to show that they could be used in clothing.

The MIT team was supported by research university EPFL, in Switzerland, and Advanced Functional Fabrics of America staff.

The U.S. Army Research Laboratory and its research office also supported the research through the Institute for Soldier Nanotechnologies.