Sharing economy companies list: From Airbnb and Uber to Omni and Hubble, 15 companies disrupting their industries

An ever-growing list of sharing economy companies are threatening to disrupt industries including transport, accommodation and office provision 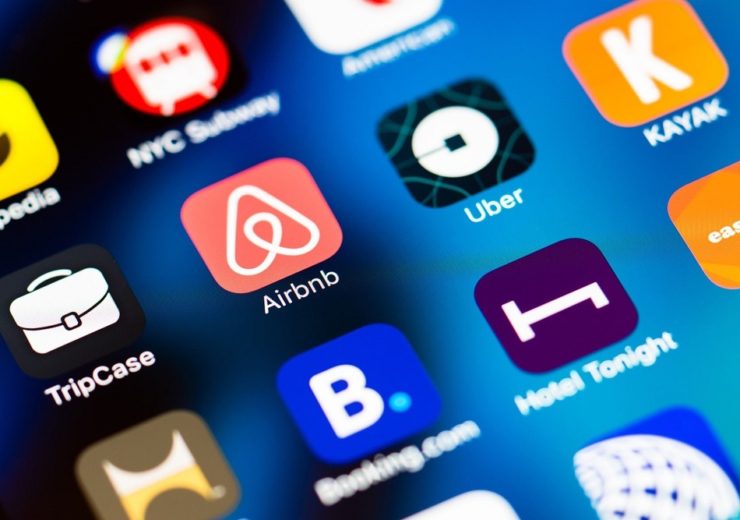 Airbnb and Uber are largely credited with founding the sharing economy (Credit: Foundation for Economic Education)

Once upon a time, owning a house with a garage and car parked on the drive was perhaps the ultimate goal in life – but a list of companies in the so-called sharing economy are changing all that.

The peer-to-peer business model pioneered by Airbnb and Uber, in which people can access services through short-term rentals for much cheaper than buying them, has expanded far beyond accommodation and taxis since those platforms were launched about a decade ago.

It’s now possible to rent a car parking space, Wi-Fi, storage space, cars, office desks and even a lawnmower or picnic basket – all on an on-demand basis.

These start-ups are now disrupting just about every industry and threatening to be some of the biggest companies on the planet, with ride-sharing platforms Uber and Lyft filing for IPOs with a combined value exceeding £100bn.

An estimated $23bn (£17.5bn) in venture capital funding was poured into the market between 2010 and 2017, according to a report by Boston Consulting Group.

While there’s now thousands of sharing economy companies, we list some of the most prominent across the world.

The original proponent of the sharing economy, Airbnb has revolutionised short-stay accommodation since it was founded in August 2008.

Its platform connects people with spare rooms, flats and homes with lodgers and tourists – turning property owners into hospitality entrepreneurs and aiming to remove the hassle of finding somewhere to stay.

Along with Airbnb, Uber is synonymous with the sharing economy after completely transforming the taxi model by enabling customers to find nearby drivers – who use their own cars rather than a managed fleet – via a mobile app.

Passengers can also ride-share to keep costs down, while the platform has expanded into the food delivery service arena with Uber Eats.

Since its launch in 2009, it has been used by 75 million riders and three million drivers to make 10 billion trips across 65 countries. There are now 15 million trips made each day.

The success of Uber has also sparked a wave of ride-hailing competitors across the world, including Lyft, Grab and DiDi.

It has also led to the term “Uberisation” being coined for business models that use technology to facilitate peer-to-peer transactions between service providers and their clients – often bypassing centrally-planned corporations.

Many start-ups are now happy to use the slogan “Uber for…” in marketing messages, with anything from cannabis delivery and private jets to models and haircuts being compared to the taxi app’s model.

Its app works similar to bike rental firms like the Santander Cycles “Boris bikes” in London, where users can use an app to find their nearest dockless scooter or electric bike.

They can unlock it be scanning a QR code or entering a six-digit ID code, and they’re charged according to how long they use it for.

Despite encountering problems in San Francisco, where it was denied a licence by the local authority to operate, it has expanded operations into cities including London, Berlin and Zurich.

With car parking spaces increasingly at a premium, both in terms of availability and price, Anthony Eskinazi came up with a novel idea for reinventing parking for the digital age in 2006.

He formed JustPark, which matches drivers with parking spaces through a website and mobile app.

Many of those spaces will be under-utilised driveways and allocated spots owned by homeowners – meaning they can earn extra cash with very little effort, while providing drivers with cheaper provision.

More than 1.5 million drivers and 20,000 property owners now use the app across the UK.

Other apps have since popped up in this space, including YourParkingSpace.

It operates across more than 50 UK cities and has 350,000 monthly users, who are connected with parking spaces owned by commercial operators as well as private driveways and off-street spaces.

Arguably the most significant example of how consumers are moving from an ownership to shared economy model is in cars, and Zipcar is one of the companies leading the charge.

Recognising that people are finding less of a need to buy a vehicle, particularly in congested big cities where public transport service is increasingly popular, its car rental firm owner Avis Budget Group recognised that giving people the keys to a car on the odd occasion they need one would suit their lifestyles better.

Zipcar has been around since 2000 but its car-pooling model has only taken off in recent years, with London one of its key markets with more than 250,000 members at the last count in August and approaching 3,000 cars – including 325 electric vehicles introduced last year.

It’s also available across the US, Canada and in cities such as Istanbul.

Members can access a car or van via various plans starting at £3 per hour or £33 per day, and unlock it by tapping their app-based digital key against a reader on the windshield.

Other car-sharing platforms include Virtuo, DriveNow and Drivy.

Internet access is one of the world’s most valuable commodities today and Fon enables users to log on to Wi-Fi networks across the world in return for sharing part their own bandwidth.

Set up in Madrid 13 years ago by serial entrepreneur Martin Varsavsky – who had a mission to blanket the world with Wi-Fi – its footprint now includes 23 million hotspots worldwide.

The online platform employs a team of “homecheckers” – ordinary people who are paid by the company to view a house or flat on behalf of someone who wants to rent it but are unable to visit in person.

They are asked to verify a property’s quality, check utilities, create a floorplan and take both 360-degree photographs and a video tour.

The Madrid-based start-up, founded in 2014, claims it can provide comprehensive information on the property and present it in a genuine way by not dressing up photographs – while removing the hassle of arranging home viewings.

Dubbed the “Airbnb for storage”, Stashbee operates a very similar model to the accommodation marketplace by connecting people looking for a place to park their possessions with property owners who want to profit from some under-utilised space.

The spare spaces listed in the marketplace can range from a room or garage in a house to an empty office or warehouse.

Stashbee also checks the identities of guests, handles payments and finds out their intent in terms of what they want to store and for how long.

The London start-up claims to be the first platform of its kind in a fragmented, traditional – but increasingly valuable – self-storage sector.

Being tied down to one office for years is no longer what many businesses desire, particularly when they may regularly fluctuate in size.

Hubble has recognised this change in needs and helps both small and large companies to find flexible office space on short-term contracts by matching them with landlords and commercial space providers via its online marketplace.

It works with large providers, such as WeWork and IWG, along with more than 500 independent providers, and the client list has included Monzo, Jaguar Land Rover and Funding Circle.

Omni aims to take the sharing economy to a new dimension by giving consumers the chance to rent just about anything.

Customers can have items they want to keep – but don’t need for now- picked up by the company and stored away.

The items – which could range in anything from a bike or water cooler to an air mattress or kitchen set – then become part of the Omni platform for other users to rent, with the owner taking a cut.

Set up in 2014, Omni is available in the San Francisco Bay Area and Portland.

The peer-to-peer marketplace idea has been replicated elsewhere, such as UK-based Fat Llama and Australia’s Rentzi.

Everyone has a talent and Fiverr offers a place for people to trade those skills with others for as little as $5.

The Israel-founded start-up acts as an online marketplace for freelancers to share professional services, which could include logo and book cover designs, video editing, copywriting, social media, SEO assistance, voiceovers, translation and illustration.

It’s billed as a tool for enabling people to take part in the economy without needing an office.

Recognising how train fares are becoming increasingly unaffordable, the four founders of Snap set up an inter-city coach travel business in 2016.

The company connects passengers with top-of-the-range coach operators that have under-utilised vehicles for prices often far cheaper than trains offer.

Most journeys organised by Snap right now are from London to cities including Nottingham, Birmingham and Bristol, but in the future it hopes to arrange a trip based on demand at short notice.

If enough people say they would like to travel from Manchester to Leeds, for example, at a certain time, the company would set up that journey.

While Airbnb connects travellers with spaces to accommodate them during a trip in what can often be a faceless interaction with a host, Couchsurfing claims to link them up with people.

Hosts open their homes to visitors, who can lodge for a short period for free, while the platform hosts 100,000 free events each year for travellers to meet either while abroad or in their own city.

Four million “couchsurfers” use the platform annually, with 400,000 hosts.

Couchsurfing, which became a for-profit corporation in 2011 – eight years after being set up in New Hampshire as a not-for-profit – is part of the “gift economy”.

An online marketplace for carpooling, BlaBlaCar helps drivers to share petrol costs for long trips by connecting them with potential passengers who can fill empty seats.

It claims to save people 70% on inter-city travel costs, listing example prices of £14 for a trip from London to Manchester, £8 for Edinburgh to Newcastle and £8 for Bristol to London.

BlaBlaCar, which was set up in 2006, says it checks all its 70 million members’ identities and partners with AXA to provide free car insurance. It takes a 12% commission from every booking.

The app is available in 22 countries, mostly in Europe but also including Brazil, India and Mexico.

A kind of Spareroom for baby boomers, Silvernest is a room-matching service that pairs homeowners with roommates – both aged over 50.

It says ageing individuals can face isolation and financial difficulties after a divorce or the death of a spouse.

By analysing preferences indicated in a user’s profile, its technology automatically matches them with compatible housemates in their area.

Hosts, who the company says can earn an extra $10,000 (£7,600) a year on average from renting a room, can also request a background check, including eviction history, from a potential renter.

To date, it has accommodated 75,000 connections in several US states.