If we believe predictions, voice search will account for all internet searches by 2020 - with the Amazon Echo and Google Home leading the way. SEO expert Barry Adams talked up the need for companies to adapt to "screenless" searching at the Nottingham Digital Summit, where Dan Robinson was in attendance 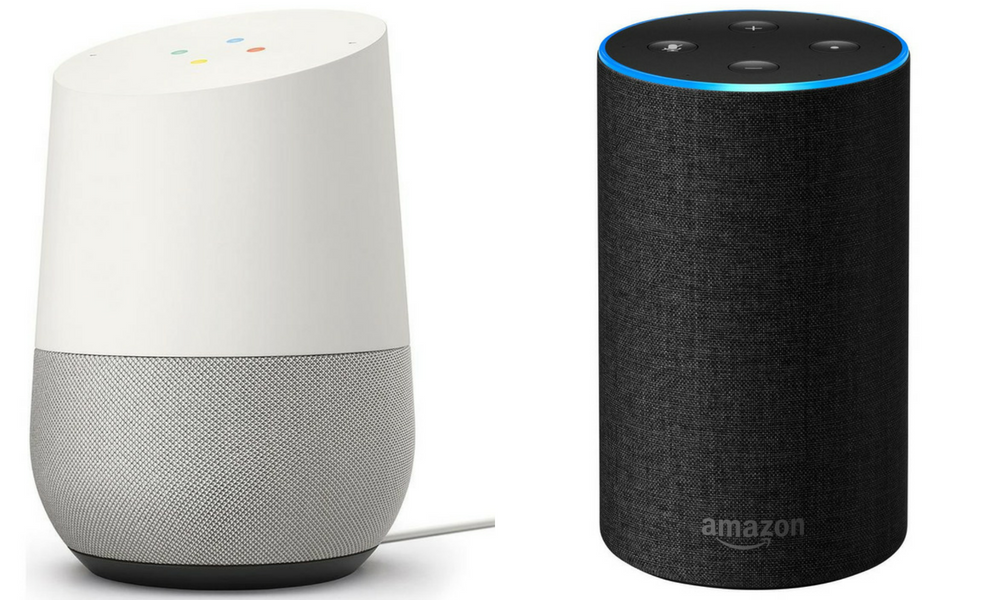 Google Home and Amazon Echo lead the smart home market, which is underpinning the move towards voice searching

“We are starting to talk to our devices and they are talking back to us.”

The Amazon Echo smart home system was released in 2015 but about 15 million of the 20 million sales were made last year, while about seven million Google Home units were sold in its first year after a 2016 launch, according to Consumer Intelligence Research Partners.

Google Trends data, meanwhile, shows that Google voice search queries have increased by 35-times since 2008 and seven-fold since 2010.

Other studies suggest 50% of all searches will be voice-based by 2020, with 21.4 million smart speakers like the Amazon Echo and Google Home in the US alone by 2020.

Those who question whether it will ever truly catch on ought to look at another statistic that shows 60% of all people using voice search only started in the past year.

Speaking at the Nottingham Digital Summit, hosted by digital marketing agency Hallam Internet, SEO consultancy Polemic Digital founder Barry says: “I don’t believe that classic search is going to disappear that much but what will happen with voice search will be the same as with mobile, which didn’t replace desktop browsing.

“There will be some transition but it’s going to add to what we already do online.”

Google lagging behind in voice search

In the US, Amazon Echo occupied 69% of the smart speaker market as of December 2017, compared to 25% for Google Home and 6% for other devices.

Given that Amazon Echo is partnered with Bing as a search engine, Barry believes this will cause great concern at Google HQ.

“It’s the first technology that Google is way behind in so it’s very scared by it,” he says.

Sometimes we won’t even need to search at all

From sponsored shopping to preferential Google rankings, we all know search engines present a raft of commercial opportunities – but sometimes we may not even need to do anything at all.

Airlines can now link into search engines and send notifications on flight delays without the user even knowing they had asked for the information, merely by adding a calendar note about the trip.

Barry calls these “contextual triggers”, adding: “Our devices know everything about us and they try to facilitate our lives by doing searches in the background without us actually prompting them to do so.”

For car journeys, he recalls a time in the not-too-distant past when we would plan a route on Google Maps by dropping pins and printing out directions.

Now, we use our smartphones as sat navs – but very soon they will be predicting what we’ll be doing along the way and adding commercial elements.

He says: “Our phone will know that we’re going to stop at our favourite coffee shop and offer us a 50% off voucher.

“It’ll be able to tell what the weather is going to be like for whatever we’ve got coming up in the week and offer suggestions, or deliver ads after we’ve completed a workout with rewards.

“We could earn Vitality points – 12,000 steps a day and you get a free drink at Starbucks, but 5,000 steps and your insurance premium goes up.

“Machines will be doing all this stuff in the background – most of it won’t be triggered by us.”

Be sure to make websites bot-friendly

Already, more than 50% of all web traffic is by bots – whether they’re the “good” variety like search engine bots, feed fetchers and commercial crawlers, or the “bad” ones such as impersonators, hacker tools and spammers.

Barry says: “Machine systems are looking for interesting things to feed the insatiable appetite for more knowledge of their customers.

“In future, if you want to be successful in this increasingly powerful machine of searches, you need to make your content integratable across different platforms.

“It has to be useful. If you aren’t then why are you in business in the first place?”

Universal internet script language will be increasingly vital, with machine-readable content, deep indexing and turning websites into data sources – while always providing answers that audiences are searching for.

He adds: “You have to realise that half your audience in the future isn’t going to be people but machines so you need to make sure they can read it.

“Websites will increasingly be less about satisfying human needs and more about data sources.”