Randi Zuckerberg gives an insight on the early days at Facebook, her opinion on moderating social media platforms and the need to get more women in tech 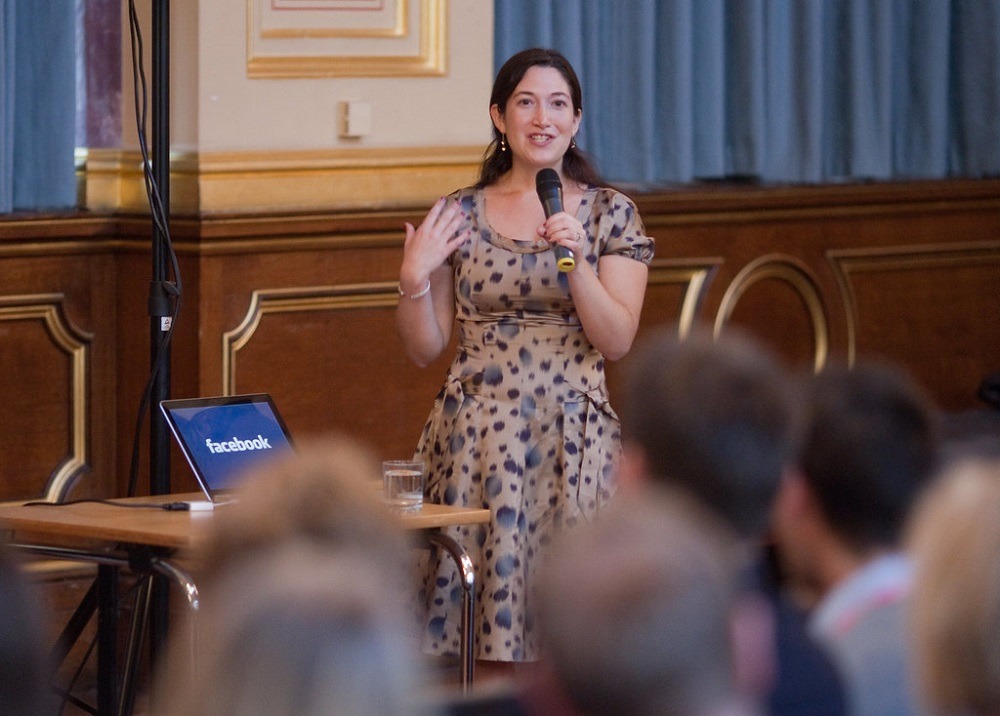 It may be hard for Randi Zuckerberg to ever escape the shadow of her better known older brother Mark, but she remains a successful business leader in her own right – with a commitment to getting more women in tech.

She had an unlikely route into entrepreneurship – she first tried to make it as a singer on Broadway before stumbling upon a love for marketing and business.

During her decade with Facebook, Randi is known for launching Facebook Live, broadcasting the first presidential debate on the platform and leading the social media giant’s marketing team.

The 37-year-old now splits her time between running Zuckerberg Media, the marketing and production company she founded, presenting her radio show Dot Complicated and creating new episodes of Dot. – a children’s TV show about a young girl using technology to solve life’s problems.

She joined the inaugural London World Business Forum earlier this month via video-link to discuss being part of Facebook in the early days, online privacy and getting more women into tech.

Although initially unhappy about being placed on the digital marketing team, Randi describes her first job at a New York ad agency as “the luckiest thing that happened to me in my career”.

She soon started getting calls from her younger brother Mark Zuckerberg asking her to work in digital marketing for his new start-up called The Facebook.

“The rest is history,” she adds.

During her time at the company, Randi saw it grow from a 12-person operation to tens of thousands.

“It’s really hard for everyone to think back to the day where Facebook was a tiny 12-person company with no budget,” she says.

“My marketing budget for my first year was one box of t-shirts. When I started, it was very much a small, scrappy start-up so we had to be very creative. Everyone was doing five jobs.

“There was one point where I had 12 different business cards lined up on my desk because, depending on who I was dealing with, I had a different job title.

“I look back very fondly on those days, because there was such creativity, and I was getting thrown into the deep end and learning new things.

“It was an incredible ride.”

There is an ongoing debate around whether social media platforms should moderate the content published by its users.

One of the Facebook applications that Randi helped to create, Facebook Live, was used by a terrorist to live-stream a mass shooting that targeted two mosques in Christchurch, New Zealand, resulting in the deaths of 50 people.

Speaking on the subject, Randi says: “One of my proudest achievements from my time at Facebook was creating Facebook Live.

“About a month ago, there was a horrible event where a shooter in New Zealand live-streamed himself on Facebook Live, going to a temple and shooting people.

“Thinking back ten years ago, I would have never thought that someone would think to use it for something so horrible.

“For the millions of people out there who are using these tools for good, to promote your business or keep in touch, there will always be those people using it in horrible ways.”

Randi thinks that more tech leaders should be asking themselves tough ethical questions about how their creations could impact the world a decade from now – and admits that not enough people in Silicon Valley were doing so 15 years ago.

She adds: “It can be very challenging trying to pick up all the ethical possibilities that people use these services for.

“The reality is that these companies don’t just exist in California – every company today is a global company, and the definition of freedom of speech and censorship, is completely different in every single country in the world.

“I’m definitely a big proponent of freedom of speech, and eliminating censorship but I do think that hateful speech needs to be policed and moderated.”

Randi Zuckerberg on the reasons behind Facebook’s success

Randi claims that Facebook was “very much the underdog” when she started at the company, with other sites such as Friendster and Myspace threatening to take the social media crown.

She credits Facebook’s commitment to authenticating people online and its start-up culture as two of the main factors behind its success.

“Facebook was the first place on the internet that required people to authenticate with an email that was linked back to a school or company,” Randi says.

“So it really had the sense early on that it was a place that was safer and where people were using their real identity.

“In many ways, that laid the groundwork for almost everything we do in the sharing economy today because, without establishing that trust on the internet, we would not feel comfortable climbing into strangers cars, and doing half the things that we do.”

Another important factor, according to Randi, was the focus on long-term success rather than immediate gratification.

Facebook turned down a reported billion-dollar offer from Yahoo! in 2006, and Randi says: “I really credit my brother and the executive team for having such a long-term vision that we were okay with turning down things in the short term.

“For me, that’s really been the thing that has guided me in my own professional career and has given me the confidence to turn down investors or business partners who weren’t the right match.”

Randi Zuckerberg on women in tech

Although Randi says she loved her time at Facebook, there was one aspect of working in Silicon Valley that she found particularly disappointing.

Randi says: “For the ten years I worked in Silicon Valley, I was the only woman in every single room.

“I like to joke that my competitive advantage in business is having a man’s name like Randi, because I would email people and they wouldn’t know that I was a woman.

“Then when I’d show up for a meeting they would ask, ‘where’s your boss, Randi?’

“It’s both funny and sad because for 15 years the numbers really haven’t changed that much for women in the tech industry, especially around the world.

“It made me want to back away from the tech industry a little bit to see what I can do to contribute to change.”

Diversity is one of the wider issues in the technology sector at the moment and Randi is currently working to try and bridge the gap.

She claims there are two key points where women are most likely to lose an ambition for working in tech.

The first is at eight years old, when children start to realise there are gender differences and begin forming their own identities.

The second gap highlighted by Randi is to do with entrepreneurship and the lack of funds given to female-led start-ups.

“Only 2% of all venture capital funding goes to female-led businesses,” she says.

“So we’re seeing fewer female-led companies are funded or aren’t able to get off the ground.”

Randi wrote a book called Dot. – about a tech-savvy eight-year-old girl – which is aimed at inspiring girls to take an interest in technology and was turned into a TV series for the US station Universal Kids.

She adds: “We need to do better around getting eight, nine and ten-year-old girls excited about STEM subjects and making sure that’s part of their identity – otherwise, they will never go on to consider themselves entrepreneurs.”