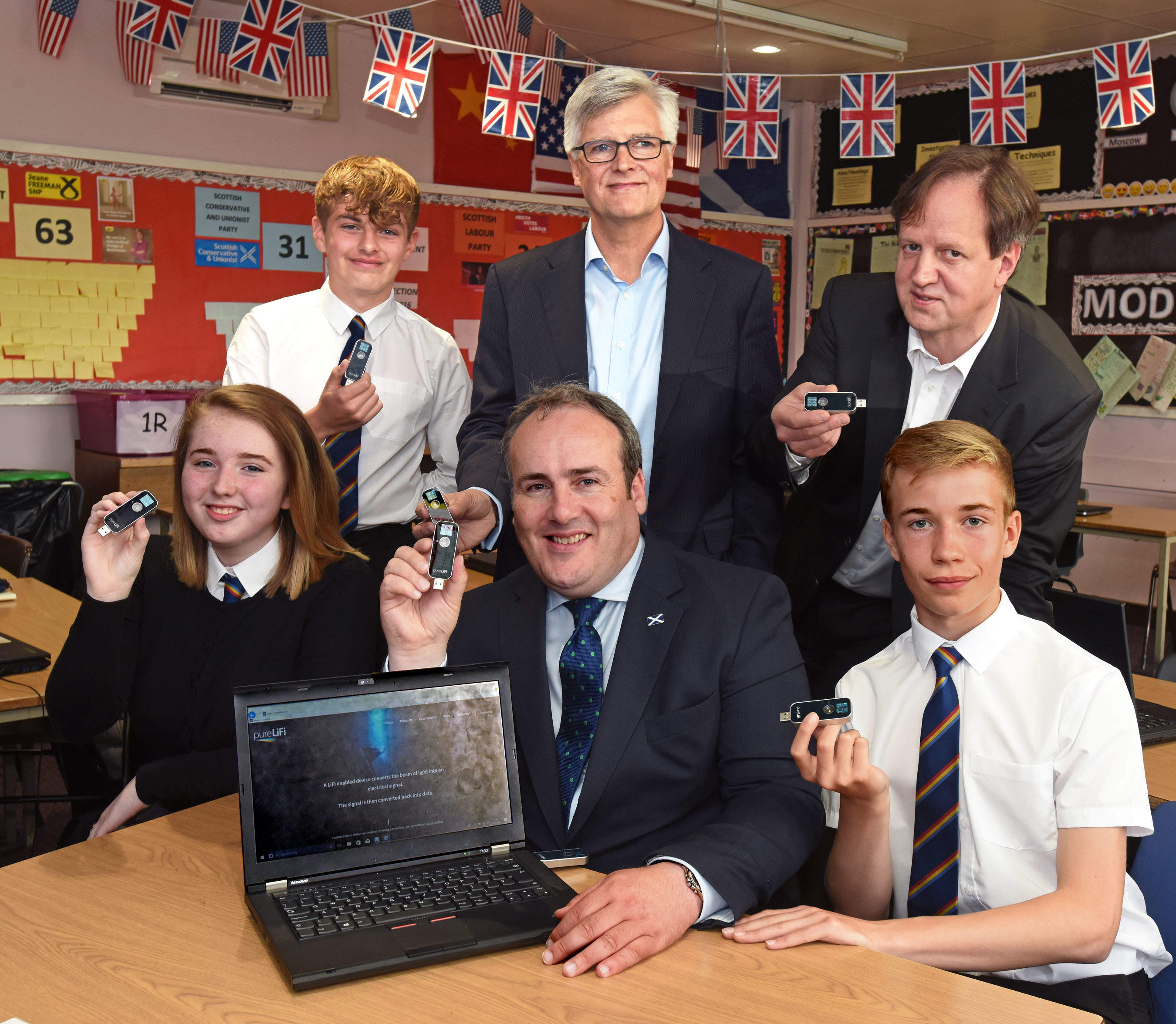 Scottish pupils have become the first in the world to connect to the internet – using light. Tech firm pureLiFi has activated a LiFi network – which uses LED light bulbs to establish wireless internet connections – at Kyle Academy secondary school in Ayr, Scotland.

It is the first school globally to pilot LiFi technology – said to be a serious contender to existing WiFi systems that work on radio frequencies – within the classroom.

Telecoms giant O2 revealed earlier this month that it was trialing a LiFi network as part of its plans for moving into the growing market for 5G technology.

Alistair Banham, CEO of Edinburgh-based pureLiFi, said: “LiFi is a transformative technology that will enable the next generation of wireless communications.

“At Kyle Academy, LiFi has enhanced the classroom into a fully connected environment allowing students to have a world of educational tools at their fingertips through light.

“The students at Kyle Academy are taking part in the early adoption of technology that will someday be in every light and every device connecting everyone and everything.

“This is just the beginning for LiFi on our journey toward unprecedented data and bandwidth.”

From the research lab to classroom with pureLiFi

LiFi technology was invented by Prof Harald Haas, a German professor of mobile communications in the University of Edinburgh’s School of Engineering, following 16 years of research in light communication.

He co-founded pureLiFi in 2012 to further develop and productise the technology.

It is a high-speed, bidirectional, secure and fully networked wireless communication that uses light, rather than radio waves used in Wi-Fi, to transmit data.

By using light waves, LiFi offers unprecedented bandwidth, which significantly enhances the connectivity of the classroom to enhance the learning environment by facilitating high-bandwidth learning materials such as videos and e-books.

Prof Haas said: “LiFi was born in Scotland at a TEDGlobal talk conference that I presented in 2011.

“Seven years later, I am absolutely thrilled to see true LiFi deployed for the first time in a school in Scotland.

“Connectivity has become a basic need to enable prosperity. This world’s first pilot not only offers secure connectivity in a school, but hopefully inspires the next generation to join us in innovating for humanity and prosperity.”

How pupils will use LiFi technology

Wireless connectivity is also in growing demand, as schools seek to cater for more students by maximising the use of space with flexible work areas using mobile devices like laptops, rather than a room of wired-internet PCs.

The installation of pureLiFi’s LiFi-XC system at Kyle Academy comprises of eight LiFi-enabled LED light bulbs in the ceiling.

Students have been given access to LiFi-XC stations that plug into their laptops, enabling high-speed connectivity through the lights.

Pupil Toby Nixon, who has taken part in the pilot, said: “It is exciting to be part the world first LiFi deployment in a school, especially because it is a technology born in Scotland, a country with a proud history of innovation.”

PureLiFi has wider support in Scotland for LiFi roll-out

The project is being conducted by pureLiFi in conjunction with the University of Edinburgh and overseen by Scottish Futures Trust, which supports the Scottish government’s Digital Strategy.

The Scottish government also supported the pilot with a £16,000 grant through its Digital Schools initiative for equipment and installation.

The university’s LiFi research and development centre, along with pureLiFi, provided resources for the execution of the pilot with hands-on support and subsequent testing.

Paul Wheelhouse MSP Minister for Energy, Connectivity and the Islands, visited the students taking part in the LiFi trial this week to find out about their experiences with the technology.

He said: “We are pleased to support a Scottish-born company whose complementary, emerging technology has the potential to transform delivery of wireless broadband communications.

“The pilot trial in Kyle Academy represents a potentially very valuable contribution to our knowledge and understanding of evolving 5G technologies.”

Councillor William Grant, South Ayrshire Council’s portfolio holder for lifelong learning, added: “It’s been really exciting for Kyle Academy to be part of this pilot project to enhance wireless technology and feedback from young people, who have definitely seen an improvement in connectivity, has been positive.

“It’s easy to see the potential the technology has, and the difference it could make in the future – not just in schools, but in business and in society – and I look forward to seeing how it moves forward.”

PureLiFi, which has grown its revenue by 300 per cent since 2014, has significantly grown its international customer base in recent years with international partnerships in place with organisations such as Cisco, Rolls-Royce and Independence Blue Cross.