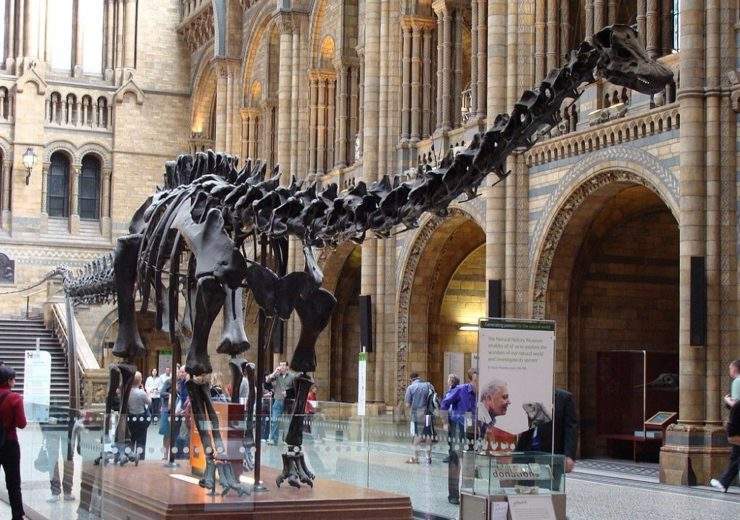 Technology and nature are often presented as opposing forces – but a new Natural History Museum app hopes to combine the best elements of both to inspire children to explore outdoors.

Computer firm Dell, which has worked with the London museum behind the scenes for ten years, has created Naturenauts, which has been described as “Pokemon Go for nature” and includes a series of children’s games involving the world-famous Dippy the Diplodocus.

The collaboration comes as Dippy – a 70ft plaster cast replica of fossilised bones that was displayed at the Natural History Museum from 1979 to 2017 – goes on a UK tour.

How the Dell and Natural History Museum app works

Speaking about the partnership at the Betts Show 2019 edtech conference in London, the Natural History Museum’s lead product manager Nathan Good said: “Neither company is interested in technology for technology’s sake but there is something to be said about tech for good.

“Dippy has been touring for about a year already and is going to be touring until the end of 2020.

“Every new museum that the tour goes to is accompanied by a programme called Natural History Adventures, which includes workshops and activities to get schoolkids and the local community enthused with nature again.

“To help inspire that, we’ve created an app called Naturenauts. It allows the child to create an avatar and join up with Dippy and a fox called Fern, and go explore nature.”

The app features different challenges, such as hunting for different colours in the natural world using the smartphones camera, doing bark rubbings with the touchscreen, and scanning plants and flowers to extract more information about them.

Mr Good added: “That’s our real tech showpiece from the partnership but there’s much more to come.”

The app was produced in conjunction with Dell EMC and Claire Vyvyan, the company’s senior vice-president, compared Naturenauts to Pokémon Go for nature.

She said: “It’s a bit of give-back for us because technology is part of the reason that children are becoming disconnected from the natural world.

“This is a way to use the technology that kids are interested in to reconnect them to the natural world.

“The world is falling apart so protection of the planet and nature for future generations is critical – we need to teach them to love nature.”

The pair hope the technology partnership will help to get children out and about, and visiting museums.

Technologies, such as smartphones and games consoles, are often criticised by parents for keeping children inside, while VR removes users from their natural surroundings altogether.

Mr Good said: “The museum will always have an interesting relationship with VR because if you have an audience coming to the Natural History Museum and seeing all the wonderful exhibits, the last thing you want them to do is to shut themselves off from all that’s going on around them.

“My initial bet is that augmented and mixed reality – using tech as a lens to experience new things around you – seems to be a better place to start.”

Mrs Vyvyan pointed to the use of VR in biology lessons to replace the need for animals in dissections or for doing experiments that couldn’t be done in classrooms.

But she added: “There are also some questions over VR’s impact on young people’s sight, so you wouldn’t want children to be using VR regularly.”

The Natural History Museum is visited by an estimated 4.5 million people each year.

It has one of the largest collections of animal and insect specimens, with more than 80 million different items in storage behind the scenes.

Mrs Vyvyan said: “I remember walking down the spider hall with drawers and drawers of every type of spider.

“One of the things that tech can do is to digitise that archive and preserve it in a digital form.

“We know that in the future, new tech will come along that will be able to tell us more about these species.

“People forget how much of an asset the Natural History Museum is to the UK – we’re incredibly lucky to have it.”

The museum currently has 350 scientists working on digitising their animal records at the moment, and it’s estimated it will take three lifetimes to complete.

The museum confirmed that so far it has managed to put “most of the butterflies and moths” into digital formats.

Dippy the Dinosaur, one of the Natural History Museums prized assets, is currently on a tour around the country to help increase footfall at museums and promote the app.

One museum in Dorset trebled its annual visitor numbers in three months with a total of 153,000 visitors.

Mr Good said: “It’s all part of the same strategy.

“The earlier you can step in and teach people about the experiences they can have in their garden or local park, the better, and shows we’ve done our job.

“We need to make the information more accessible.”