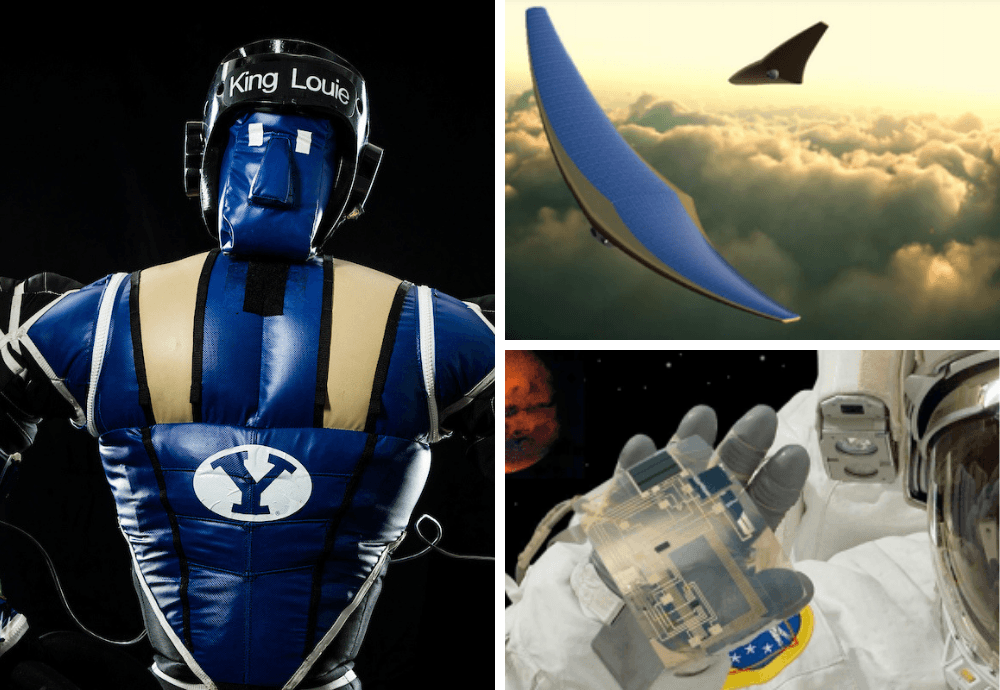 US space agency NASA is investing in several innovative technology projects as it looks to the future of interplanetary exploration.

The NASA Innovative Advanced Concepts (NIAC) programme looks to break the existing rules of space travel by inviting American entrepreneurs to come up with new concepts that could “transform future NASA missions”.

Since re-launching in 2011, the NIAC has conducted phase one studies into 144 concepts  the space authority believed could be “technically credible”.

Successful applicants receive awards of around $125,000 (£97,000) to help fund research and bring the projects closer to reality.

We take a look at some of the more outlandish concepts that NASA has supported at one stage or another, believing some could “change the possible” in future space missions.

In 2018, a submission from Chang-kwon Kang from the University of Alabama raised the possibility of using a swarm of “flapping wing aerospace architectures” to explore the surface of Mars.

The so-called Marsbees, which didn’t make it past phase one project selection, would use insect-like wings to save energy.

Initial research found the bio-inspired bumblebee wing was the best design to generate sufficient lift to hover in the Martian atmosphere.

The electronic bees would carry sensors and communication equipment and were designed to use a Mars Rover as a mobile base for charging.

An engineer from Texas has designed the ultimate piece of wearable technology for NASA’s astronauts.

Ana Diaz Artiles’ SmartSuit claims to increase human performance in terms of motion and dexterity, meaning astronauts would be more mobile and able to better interact with their surroundings.

The outer layer of the suit contains sensors that collect data from the environment and visually display it for the wearer to get a better understanding of their surroundings.

To top it off, the suit is also designed to be capable of repairing itself.

Although not strictly part of the NIAC scheme, NASA is funding research into inflatable robots designed by Brigham Young University, in Provo, Utah.

The blow-up humanoid – dubbed King Louie – is well-suited to space travel because of its compact size when deflated and low mass.

Movement is powered by inflatable sacks that function similarly to human muscles and create movement by expanding and contracting air chambers.

King Louie is also good for working alongside humans because of its soft padding, making it less risky for an astronaut and robot to work in tandem.

Solar probes are limited in how close they can get when observing the star.

The Parker Solar Probe launched last year and is planning to get seven-times closer to the sun’s surface than any previous mission – but NASA physicist Doug Willard believes we can get closer.

The solar surfing project he created is trialling new, highly-reflective coatings that could be used to cover a thin solar shield, which will protect any probe from the sun’s rays.

Mr Willard, based at the NASA Kennedy Space Center in Florida, predicts this would allow a craft to get within one solar radii of the sun’s surface – an eight-fold improvement over the Parker Solar Probe – allowing it to study the physics of the star’s heating mechanisms.

The proposed system uses a large balloon, attached to six suspended modules which act as feet for moving the transport along a planet’s surface.

The six “feet” also double up as containers, meaning that the BALLET balloon can transport several payloads to a predetermined location.

Mr Nayar claims the platform is “highly stable” due to its low centre of gravity and is able to navigate tough terrain to access areas that other landing modules would be unable to.

A small team from NASA’s Jet Propulsion Laboratory are investigating the possibility of using printable electronics in spacecraft.

They believe the commercially-available technology could be used to create every aspect of a spacecraft, “from the scientific sensor through to the data downlink”.

The flexible printed electronics have a range of benefits such as being low-mass, small and cheap to produce and could enable new types of missions.

The NIAC project passed to phase two, where the team will attempt to prove the printed circuitry can be used to take scientific measurements, perform data processing, provide data storage and transmit the data.

Movement could also be performed through the use of electronically-activated polymer inks that would allow the flexible machines to form into a sail, fold into a “paper plane” or move along like an inchworm.

The Bioinspired Ray for Extreme Environments and Zonal Exploration – otherwise known as BREEZE – is another future NASA tech to take inspiration from the natural world.

The flying technology copies the kinematics of a manta ray in order to create machines capable of navigating the atmosphere of Venus.

BREEZE will fly along the planet’s zonal winds in order to collect data samples from the dark side of the planet – which many other flying apparatus struggle to navigate.

It is hoped that, if successful, the technology could be used to explore other planets and moons with dense atmospheres, such as Saturn’s moon Titan.