How the Magic Table projector delivers happiness to dementia patients

The simple combination of a projector and an infrared sensor has had a huge impact on dementia patients' lives, according to John Ramsay, who distributes the Magic Table healthcare technology in the UK 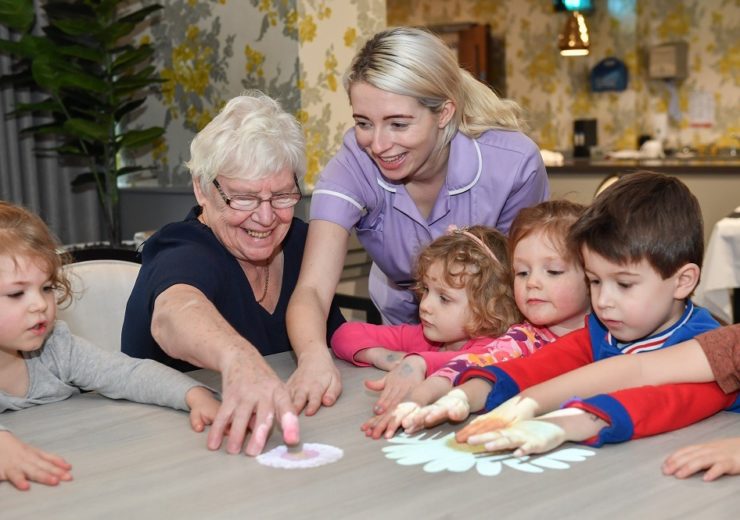 Interactive technology known as the Magic Table is helping to put a smile on the face of people with dementia and their carers – while increasing their social engagement.

The Tovertafel projector creates bright, moving image displays on a table that participants can interact with by playing games and completing challenges.

Launched in the Netherlands two years ago, it is now used by 2,000 care services and 500 care homes in the UK – where it is given the “Magic Table” moniker as this is the English translation of the brand name.

John Ramsay, CEO of social enterprise Shift8*, first introduced the innovation to the UK as distributor after being inspired to get involved in the project due to its potential.

He says: “I was hooked on the idea of making happy moments for dementia patients because they are often very isolated and people seem to be less concerned with looking out for them in modern society.

“We constantly have anecdotes of people who haven’t spoken in a long time and suddenly they’re using verbal communication once they start playing.”

The inspiration for the Magic Table

The Magic Table was first developed by Hester Le Riche, a PhD student who had been researching how happiness was experienced by those living with the neurodegenerative disease.

It was broken down into three core elements – being physical, sociable and cognitive – and the importance of the interaction between those.

John explains that the lights and shapes projected onto the table created physical interaction, while the experience of sitting around a table and playing the interactive games with others made it a social experience.

He says: “Hester found from her PhD that there were three parts of the brain that continue to work well while someone has dementia, while others may not work as well.

“They are reminiscence, relaxation and sensory stimulation.

“Because the activities trigger those parts of the brain, you get cognitive engagement, which then helps with the social and physical engagement too.”

Hester set up her own business under the name Active Cues to market the Tovertafel in Holland.

The idea was then shared with John, who brought it over to the UK as the Magic Table.

How does the Magic Table help people with dementia?

The technology uses a projector and infrared sensors to detect the movement of people’s arms and hands.

It then projects images onto a flat surface or tabletop. These include bubbles for participants to pop or a beach ball for them to pass to one another.

But for John – who was a teenage carer for his late father when he developed early onset dementia – the work doesn’t end with the installation of the projector.

He says: “The great thing with Shift8* and what we’re doing in the UK is that we’re not just installing a piece of equipment – there’s an entire service that we’ve built into the company to ensure that we’re helping people use the table in the best possible way.

“At the end of the day, what is the point if you’re not changing the world a little bit and helping those, like my dad, to have a bit more happiness in their lives?”

The Shift8* team does this through training sessions, monitoring the use of the units and through an innovative buddy programme where young children are encouraged to volunteer at their local care home and play the games with the residents.

John adds: “It creates this inter-generational activity that has an energy to it that you might not get without the younger people in the room.

“Equally, for the younger people, it allows them to experience interacting with someone with dementia or cognitive challenges.

“It can make the younger people appreciate others in society and make us a little bit more accepting.”

The Magic Table is now being sold to libraries, hospitals and community spaces, as well as the care homes it was originally designed for.

In one care home, where the Tovertafel was introduced, the council assessment score went from a happiness rating of 18% to 78%, while the number of people attending dementia-related activity sessions at a library jumped from eight to 40 after it was equipped with the tech.

But the figures only tell half the story.

John says: “I think the best response I ever heard was after one session when someone said: ‘You can’t tell who has dementia and who hasn’t’.

“It would be brilliant for society if we would be able to deliver a world where people were supported to such an extent.”

Caring for a father with dementia from a young age

John feels closer than most to the technology, having witnessed the impact of dementia first-hand

His father David was diagnosed with early onset dementia when John was 12 and he had to help care for his dad throughout his teenage years.

“You go from a day-to-day existence where your dad’s off to work and a fundamental part of the family – helping cook meals and helping you with your homework – to someone where the roles are completely reversed,” says John, now 35.

“Little by little, I was taking on more of the responsibilities that you’d usually expect one of your parents to do.

“I’m sure, in a positive way, it’s given me a lot of confidence and it’s made me appreciate the need to make the most out of life – which triggered my decision to quit corporate law and do this.

“But equally, I’m just about to be a dad myself, and I see the bits that you miss out on.

“Even now, it’s still hard to not be able to turn to your dad and talk about things you’ve achieved.”

For John, the hardest part was watching his father’s condition deteriorate.

“You gradually lost a bit more of the man you once knew and that is pretty tough to go through.”

After his father passed away more than ten years ago, John quit his job as a corporate lawyer at one of London’s top five law firms to found the social enterprise Shift8*.

“When it was the summer holidays and me and my dad were at home, I would have done anything to be able to go to the local library and spend half an hour doing something that would make my dad smile,” adds John.

“I’ve never done a demonstration where people haven’t interacted and enjoyed it.”