In a bid to provide businesses and governments with an efficient, practical method of implementing electric transportation into their operating models, the new Kymco Ionex Commercial range of electric scooters, charging solutions and software launched last night ahead of the Paris Motor Show 2018 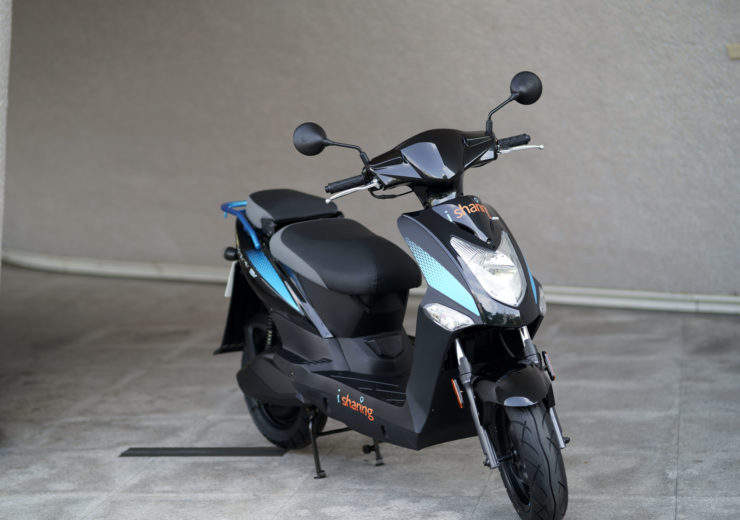 Switching from traditional transport fleets to electric could become an easier transition for operators after the launch of a new range of energy-efficient scooters. The Kymco Ionex Commercial, unveiled on the eve of the Paris Motor Show 2018, is a line of electric scooters aimed for adoption by businesses, and features its own charging solution and software package.

Taiwanese manufacturer Kymco’s new range follows the launch of its Ionex scooter consumer range earlier this year, which was intended to provide ordinary people with an efficient, sleek method of electric transport.

Its newest launch last night (3 October), however, is aimed at commercial users and public bodies looking to switch their transport operations to electric.

The company says there are an estimated 150 million scooters roaming the streets across the world today, with about five million being used for commercial purposes.

Kymco chairman Allen Ko said: “This is an inflection point for businesses and governments to make a big impact in modern transportation.

“Our new Ionex Commercial launch is another step forward in Kymco’s mission to transform modern transportation by making the world greener, cities cleaner and electric a practical reality.

“The launch of Ionex for consumers marked a significant move towards making electric a practical reality for everyday people. However, it was only the first step.

“To make an even bigger impact, electric vehicles for commercial purposes need to play a critical role as well.”

The vehicles include customisable scooters and bikes, while the charging solutions comprise standard and fast charging.

This is in addition to the ability to charge three batteries at once, but only have one in use so the driver doesn’t have to wait.

The 5kg Ionex smart batteries are removable and work with all the models offered in Kymco’s lastest range.

The Ionex Commecial range also features a cloud-based electric vehicle operating system, which can be used by businesses and public bodies looking to better organise their electric fleet.

“Ionex Commercial removes the barriers for businesses and governments by offering them a total solution to execute the transition to electric.

“Kymco’s launch is in many ways the long-awaited answer to the recognition that while the potential to change the world is great, unfortunately until today, the transition to electric has been nearly impossible.”

The need for Kymco Ionex Commercial

While the number of electric scooters used commercially is a small proportion of the total 150 million on road globally, those five million travel an average of seven times further distance than the consumer bikes.

They are also replaced twice as often, meaning they represent about 20% of the total energy consumption for two-wheel vehicles.

Mr Ko highlighted petroleum companies have much to gain for switching to electric as they already possess all the extensive service networks that could facilitate them, while their revenue generation models stand to benefit from the transition.

Logistics and retail companies also have the potential to make the most of an all-electric delivery fleet.

Meanwhile, vehicle-sharing companies are well-placed to capitalise on the growing popularity of electric transport due to its eco-friendly and cost efficient nature as it’s both supported by consumers and backed by governments.

It eliminates the need for people to travel long distances to reach a train or bus station and encourages more to move from private vehicle ownership to municipal transit.

Mr Ko said: “Unlike gasoline-powered vehicles, electric vehicles need supporting charging facilities that simply have not been in place.

“What is desperately need is a dependable, one-stop provider to assemble an all-encompassing array of capabilities to support the electric transition.

“This is what Ionex Commercial provides, and it will empower and enable all businesses and governments to go electric.”

Kymco – an abbreviation of Kwang Yang Motor Co Ltd – was established in 1963 and specialises in manufacturing motorcycles and motor scooters that are ridden across the world.

Its headquarters and factory are based in Kaohsiung, Taiwan, with about 3,000 employees.

The company, which has other production sites across Asia, produces about 570,000 vehicles a year.