The story of Eristica, the Jackass-style challenge app that lets users complete dares for money

The founder of Eristica, a challenge and cryptocurrency app, discusses his inspiration and why the most dangerous challenges are now "only for professionals" 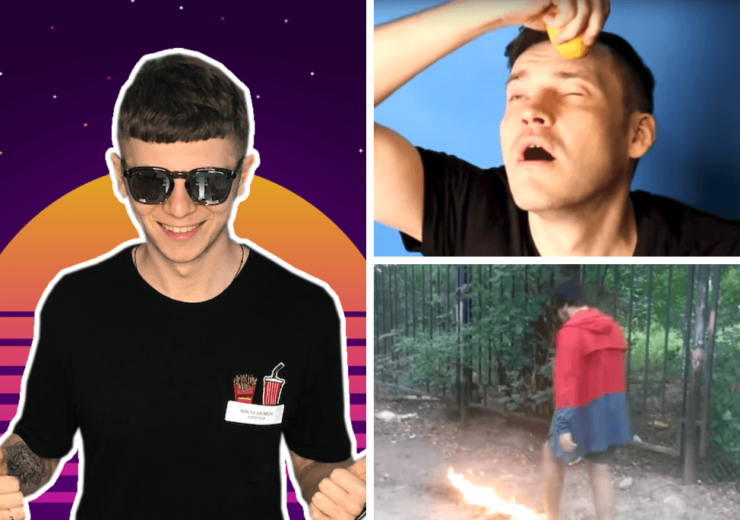 Attention-grabbing videos showing people complete stunts such as running across fire helped Eristica grab headlines. Now the challenge app’s founder Nikita Akimov tells Sam Forsdick he is hoping to change its focus to entice a more creative user-base – but will it be able to avoid the controversies of other social video apps such as TikTok?

It was once billed as the ultimate dare app, ideal for Johnny Knoxville wannabes.

Promotional videos showing daredevils setting their pants on fire, launching fireworks into themselves, eating mould and squeezing lemon juice in their eyes, helped to get Eristica attention from websites such as Vice and Forbes Russia.

However, the start-up’s founder Nikita Akimov is now looking to change its perception from being the app embodiment of “don’t try this at home” MTV stunt show Jackass.

“We’re not marketing ourselves as a stupid challenge app,” says the 27-year-old.

“We want people to make awesome and amazing, with fun videos and only sometimes stupid.”

Since being founded in 2015, Eristica – which has offices in Singapore, US, Ukraine and Russia – has managed to pass the million download mark.

The app lets users either set a challenge for themselves or others and, once it’s completed, they can claim their reward.

The recent introduction of monetary incentives, which are paid out via the app’s own cryptocurrency, has made it a profitable way for some users to pass the time.

Successfully completing a challenge can generally earn a user Gold (the alternative, in-app currency) or, in a new addition, a few dollars.

The company promises that completing enough of these tasks could make you Eristica “famous”.

Akimov claims some frequent users are making a couple of hundred dollars a month through the app.

Eristica takes a 3% commission from each challenge and also makes money through in-app purchase, such as gaining VIP status and private challenges.

“We only started real money challenges a couple of weeks ago, so it’s still accelerating,” he adds.

“It’s a really easy and comfortable way to make money. You can pick the challenges you want and choose the videos you want to upload.

“The cryptocurrency is used as an underlying technology to help with transactions. It’s easier, faster and isn’t reliant on trusting the other party.”

Although the cryptocurrency can currently only be traded within the app, there are plans to take the coin to market.

Inspiration for the Eristica challenge app

The idea for the app first came from a challenge set by Akimov’s friends, who bet he couldn’t learn 15 guitar solos in two weeks. The prize was a box of whiskey.

Akimov says: “We published the challenge on social media and our followers were posting lots of comments and requesting new videos of me playing guitar.

“At the same time, the ALS ice bucket challenge was taking off and even searching the phrase ‘challenge’ on YouTube returned millions of results.

“We realised then that we were on to a great idea, so decided to build an app where people could share challenges with one another and upload their video proof.

“It wasn’t based on a hypothesis, it was just an instinct that challenges were popular and hopefully will continue to be in the future.”

Akimov is keen to point to the more creative uses of the app that inspired its initial creation.

These vary from doing 100 press-ups, doing a trick on a skateboard or drinking a glass of water without using your hands.

Akimov says: “The challenges appearing during the launch of Marvel film Avengers End Game, where people were tasked with dressing up as people from the film, were impressive.

“There was also a girl who made DIY videos crafting different things from a plastic bottle, such as slippers.

“I really liked the way she approached the challenges with a sense of humour.”

Although there is still room for silliness on the app – such as challenges asking users to “sniff a dog’s butt” to “filling your trainers with mayonnaise and doing a back-flip” – the dangerous stunts that helped get the app its initial attention, appear much less frequently.

“We don’t usually post those sorts of challenges and have a very strict moderation system,” claims Akimov.

“The Jackass and Johnny Knoxville-inspired content is only allowed if people are verified by the team, so we know they are capable of doing the challenges without hurting themselves.

“We also put a disclaimer in front of the video asking people not to try and repeat it at home.”

Explaining the verification process, he adds: “The stars normally send us a few videos so we can see if they’re made by a professional and to check that they’re capable of doing the stunts.

“Anyone can tell whether the person they’re watching is a professional after seeing videos from them over the space of a few months.”

US reality comedy show Jackass had to respond after the media accused it of encouraging dangerous copycatting, but Akimov is unfazed.

He says: “We’re not worried about copycats because we won’t allow those types of challenges on the platform if they haven’t been verified.

“It’s controversial, but you could ask the same questions of the makers of Jackass.

“I don’t think they were worried that people would copy their videos. They know that they are professionals and others would struggle to repeat them.”

He adds: “We have never seen anyone trying to repeat any videos that we’ve posted – that’s just statistics.

“We market the app this way because that’s what people like to watch but they don’t like to repeat it.

“It’s all about driving attention and catching the eyeballs of youngsters.”

How Eristica moderates challenges on the app

Social media apps have come under closer scrutiny over the types of content they can publish on their platforms over fears they are promoting dangerous ideas and exposing young people to inappropriate content.

But controversies surrounding social and video apps – such as TikTok, which has been accused of facilitating the sharing of Nazi videos and explicit images of young boys and girls – continue.

Akimov points to the strict user policy and moderation as a means of preventing harmful content from being published on Eristica.

Its user agreement requests that people don’t publish content on – or encourages behaviour that is – “illegal, immoral dangerous, defamatory, objectionable, indecent or pornographic”.

Akimov says: “The app has three levels of moderation and we also have to make sure we comply with all the Google Play and Apple App Store content policies.

“If we see a description of a challenge that violates any content policies, we ban it before the challenge can be published.

“Our moderation team works 24/7 and watches all the videos before they get published.”

This team is currently five people-strong but Akimov claims there are plans to expand it.

Eristica has a further ten staff, who have experience in skills as diverse as growth hacking and blockchain.

He adds: “We live in a controversial world where people can hurt themselves or others and post it online.

“We don’t allow any nudity, no blood, no violence and no harmful content.”

But certain videos are still finding their way on to the app.

One user posted videos of themselves “flashing” for the camera and others promised to “show my panties”, while people in the comments section encouraged them to “take them off”. 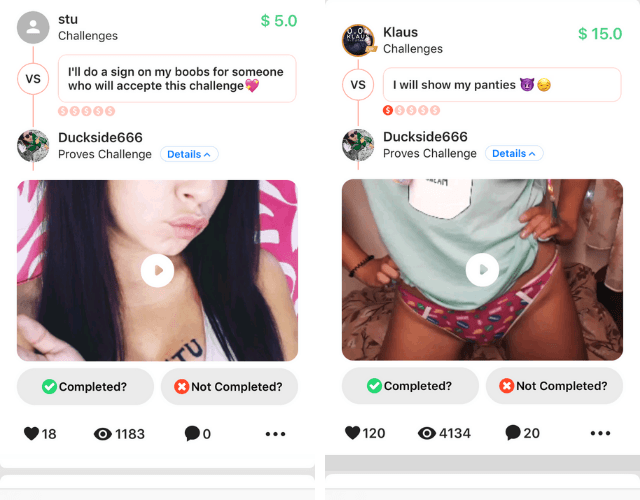 According to Nikita, the app is aimed at people aged 17 to 27, although he has previously claimed the majority of the platform’s users were aged between 13 and 22.

The app is rated 17+ on the Apple App Store and comes with a parental guidance notice on Google’s Play Store.

Responding to the videos, Akimov says: “When you’re dealing with user-generated content, something like that may appear by accident – we’ll definitely take a closer look and remove this content if it in fact violates any of our policies.

“As for the outlined challenges, ‘Flash on camera’ once had a very funny video of a guy cosplaying as the comicbook superhero Flash and that’s probably why this challenge description wasn’t blocked automatically.

“However, the word ‘flash’ gets flagged by our system meaning it will automatically go to manual moderation.

“As for the ‘show your panties’ challenge – this particular description doesn’t imply anything that can violate rules by default.

“That said, if the video to this challenge will contain materials that do – it won’t pass moderation and no one would be able to see it on the app.”

Controversy will no doubt persist for an app that lives life on the edge but perhaps the new vision of Eristica’s founder suggests a maturer future.

Akimov adds: “Eristica is designed for users who are willing to earn money while making video content they love.

“You can find any type of challenges on our app.

“If you like sports, social good, dancing, pranks, fun in general – it’s not going to be a problem to pick a challenge that fits your mood or talent.”