Two physiotherapists have spent their own money on iPrescribe Exercise - an app that automates personalised exercise plans based on pre-existing health conditions. James Walker caught up with Lewis Manning to chat about their contribution to health tech 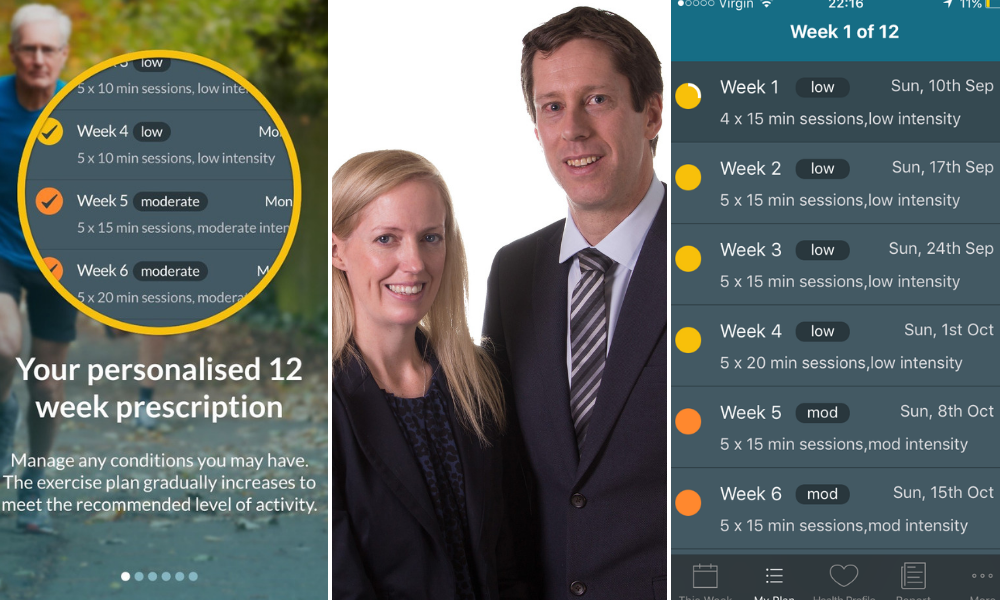 iPrescribe co-founders Carron Manning and her husband Lewis spent years on the front line of the UK fitness crisis as NHS physiotherapists, and came to realise they rarely had the time to give patients exercise plans on top of their immediate medical work.

So Carron, 39, and Lewis, 41, dipped into their own pockets and created iPrescribe Exercise – an app that uses data to provide exercise plans through automation.

The Epping-based entrepreneurs have combined their deep experience as physiotherapists – spanning private, public and athlete healthcare – with an algorithm that tailors 12-week exercise programmes based on answers to a survey.

The questionnaire factors in pre-existing health conditions and current levels of activity to build a fitness routine that gradually improves activity levels at a safe intensity.

Two years after its launch, iPrescribe has found its way onto the official National Health Service app library in the UK.

The free app has also built some traction in the United States – where three-quarters of its 6,000-plus users are active.

But Carron and Lewis have yet to make money from the app – creating and running the software as a passion project while they work on monetising it.

Compelo caught up with Lewis Manning to talk about the state of exercise in the UK, the iPrescribe deal with the NHS and how the couple plan to make money from the app.

Where did you get the idea for iPrescribe?

“Basically as physios we were seeing a lot of people. There were two people with me paying, but often that wasn’t their major issue.

“They’d have all these other illness and problems related to a sedentary lifestyle, so heart disease, diabetes and that sort of thing.

“We had to modify exercises based on that sort of stuff, and then we’d be looking at trying to get these people exercising.

“We did a bit of research and we obviously knew what a big problem it was throughout the health service but also that exercise of physical activity is such a good way of preventing and helping people recover from that.

“The problem is that each person has their own set of circumstances and their own set of exercises they want to do. I was just giving them exercise programmes based on those parameters and starting gradually, building them up and then I thought this could be scaled – if we just gathered a bit of information, we could automate the whole process.

“Based on our knowledge, we needed to get a bit of information but then we could automate the process and that’s where the idea came about from.”

How does iPrescribe use automation and open data?

“At the moment, we’re looking at gathering that on-board. Our original idea was that we gathered anthropometric data: age, weight, height, activity levels as well as chronic diseases people had and their goals.

“We then took all that information, put it through an algorithm and that gave them a 12-week programme.

“Where we’re looking at bringing in open data – we can think of exercises in parameters of frequency, intensity, time and type. We prescribe that based on the data given to us by the person.

“The type, you need to give people a choice on that. That’s something I’ve learnt in a long time as a physio. If you think swimming is a great exercise for someone, but they don’t know how to swim, they’re not going to do it.

“What the open data will give us is so many more specific options for people, so we can tell them what to do and say look there’s an exercise class, there’s a gym here that does that and give them so many more options which is going to better engage people.”

I assume your app tailors exercise plans to pre-existing conditions such as heart disease or age?

“Exactly. We did a whole lot of research on the medical and scientific research behind exercise, both from what’s effective and what’s safe.

“For instance, people with certain heart conditions can’t do high-intensity exercise, so we stop them from doing that and that’s all fed into the algorithm.

“We want to make sure it’s as safe as it would if you went to see a health professional.”

How big a deal was it to get on the NHS library?

“It was a big a deal. There were two sides of it – the clinical side that’s showing we’ve got an app that’s useful, which we’re fine with because we’re clinicians.

“Then there was the technical side which we’re not as au fait with – making sure the data is all safe and that the NHS are not recommending app that could do harm and all that stuff from a technical side.

“That took us a bit of time – getting all the information based on that. But yeah, getting on the NHS library was a big deal and we’re very excited about it.”

How much did the NHS pay for your app to be included on its store?

“It’s free. The NHS want a place where people go and it’s confident it’s getting a good app. Ours is free at the moment, but if it wasn’t free it would just be another way for people to find it and download it.

“We’ve just got a contract with the NHS cloud-based server where we can sell things to the NHS, and we’re going to have to develop that but then every time a doctor or whoever downloads it, we’ll get paid a certain amount – whatever unit price you put on it.

“That looking like a very good way [of making money] once we’ve developed the cloud version and commercialised it.”

I suppose being GDPR compliant can be quite tough. Is it just the two of you working on iPrescribe?

“Yes, it’s just the two of us at the moment. All the data is stored on the patient’s phone, which is a big help for us.

“We have an emailable record that extracts the data and [patients] can email it to anyone they want, such as a doctor.

“But there’s no cloud-based storage. That’s something we definitely need to do to give our users the best experience possible. But when we come to that, there’s going to be a lot more work looking at data protection and everything. Being on the NHS library has made us think a whole lot about that.

“We’re okay that when we do that, which is the next step, we will be compliant with everything.”

Would you be looking to expand your team at that point?

“We absolutely would be looking to expand as what we’re looking at is developing the app in a few ways, looking at the cloud-based storage but also improving the feedback and putting this Open Active data in the app as well as a few other updates we’re doing.

“What we’d like to do is get someone technical on-board who can make these changes inside the company and looking at commercialising it at that point. Then we’d expand the team at that point, most definitely.”

How do you make revenue at the moment?

“We’re not revenue-generating at the moment. Basically, it started out as we saw a need for it and wanted to prove a concept.

“That’s why we only released it on the iPhone to start with, just to see that people would download it and use it.

“We wanted to keep it free because the end user – and these are people we see all the time – have so many barriers in the way of them exercising already that we didn’t want to add another barrier to it.

“Even putting a small unit price on it, we decided early on would have been just another barrier to them exercising. It’s also why we don’t require people to go through a health professional.

“There are pinch points in people’s journey where they get a shock diagnosis and they’re very motivated to do stuff. So if someone says you’ve got diabetes, they’ll do it.

“That point is the time to get them and putting barriers in their way would stop them using the app.

“So we decided that keeping it free at the point of service would be the way to go initially, and then build-up the users and take it from there.”

How much of an issue would you say poor exercise is in the UK?

“We say that people should be getting 150 minutes of moderate intensity or 75 minutes of high intensity exercise a week. It’s always a bit of a problem to get exact data, but it works out that roughly half of people in Western society don’t meet that goal.

“There was a recent study in The Lancet that looked at the cost of physical inactivity worldwide, which it found to be $69bn (£53bn) of costs taken from health systems and lost productivity.

“It cost the NHS £2bn a year. The numbers are really quite big and the thing about it is, compared to medication, exercise is cheap.

“The problem is getting the right exercise programme to the right person, giving them the tools to do something themselves.”