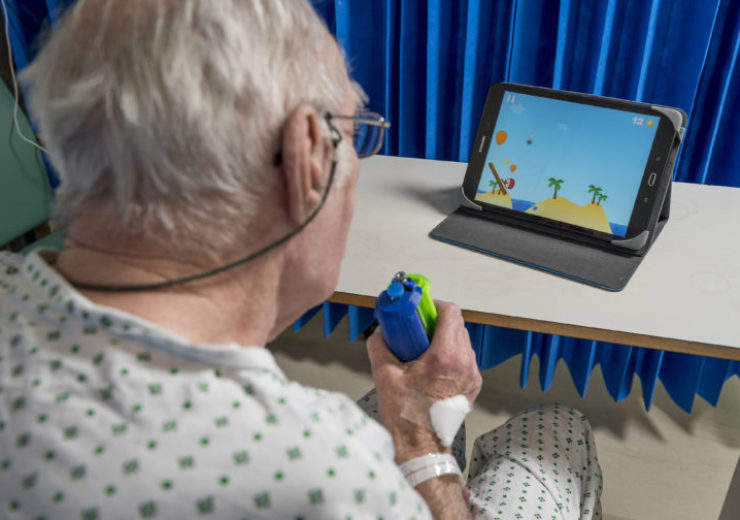 GripAble is a mobile video game for stroke rehabilitation

Physical therapy equipment has remained unchanged for decades – but now a tech start-up has created a mobile video game for stroke rehabilitation.

GripAble hopes to “gamify” treatment for patients recovering from the life-threatening condition by creating a squeezable controller that helps regain mobility in a user’s hand that can used in its own range of platform games and objective-based assessments.

About 900,000 people in the UK are living with the effects of a stroke – which occurs when the blood supply to part of the brain is cut off – and 70% of those exhibit slow motor movement in their hands.

Physiotherapy is used to help regain strength in the hands and reduce the muscle spasms that make movement stiff and painful.

Dr Paul Rinne, a clinical neuroscientist who is also CEO and co-founder of GripAble, said: “After a stroke, the thing patients want most is return to normal hand movement.

“The more rehab people do, the better, but in-clinic rehab is often inaccessible and at-home rehab is painful and boring.”

“We wanted to design a single product that could collect data through wearable technology, gamify it to make it engaging and then send data to physios and clinics.”

Speaking to an audience at the Giant Health 2018 medtech conference in London yesterday (23 November), he explained that rehabilitation and therapy tech is “behind the times”, using foam, cones and inanimate objects to help regain use of their hand, with their activity measured with a dynamometer – a device used to measure torque and force.

Dr Rinne’s solution was to “combine the therapy tech and measuring device into one object, and then gamify it”.

A lightweight wireless device, which Dr Rinne compared to a Nintendo Wii remote, is placed in the user’s hand.

This connects to a tablet or app that displays a simple game or task, such as copying movements on a screen.

The action in the game is controlled by the user either squeezing their hand or moving their arm.

The sensitivity of the device, developed at Imperial College London, means it is capable of detecting even minor “flicker” movement.

Why gamification of physical therapies works

A study carried out by Charing Cross Hospital showed that GripAble can be used by 93% of patients suffering with a wide range of hand and arm disabilities, including those with very limited movement.

“However, most games are designed for users to play on their own, which can actually discourage and isolate many patients.”

Dr Rinne added: “Humans want interaction so our focus is now on a multi-system social game.”

One of GripAble’s games, called Balloon Buddies, solves this by pairing patients with their carers or family members to guide an owl through an aerial course by varying the pressure on the device.

Patients said they used the device three times a day and found it helped them to perform the activities they used to be able to.

Discussing the difficulties with selling the concept to investors, Dr Rinne said: “98% of medical start-ups fail so you need to show validation to investors.

“We needed to prove that clinics would buy the data collected through the handheld device and that we would break into patients’ homes and be a good product for the consumer.”

His solution was to take the product into clinics and get patients to begin interacting with it in their rehabilitation sessions.

“Once patients were used to it in the clinic, they started taking it home and that was our in,” Dr Rinne added.

So far, GripAble has sold over 100 units and is generating revenue, but now the ambition is to start to scale.