LightStrike robots, developed by US firm Xenex, are already used in more than 600 hospitals across the world 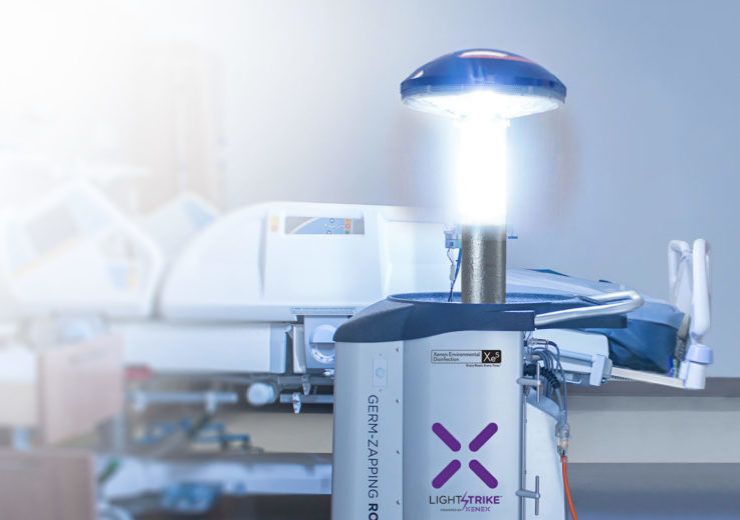 Germ-zapping robots could be deployed in offices, hotels, and even public transport, to give people peace of mind during the return to normality after Covid-19.

The LightStrike robot, developed by American firm Xenex, has already been used in hundreds of hospitals across the world to clean surfaces using ultraviolet irradiation and ultimately reduce infections caused by pathogens.

But the company’s founder and chief scientific officer, Mark Stibich, believes its potential doesn’t end there, with enquiries from a wide range of industries outside of healthcare that are looking to resume normal service.

“Everyone’s interested, and everyone’s trying to work out how to reopen safely. What we can do is make these environments safe,” said Stibich.

“Even in the busy hospital environment some of our customers can clean up to 17 rooms per day with the robot. If we could bring that into the workplace, you could think about getting all of the bathrooms and all of the offices in a workspace.

“In this return to normality, people need to have the confidence to go back into a hospital for a procedure, and feel comfortable going to a hotel, or getting on a plane, or going to a restaurant.

“We want to make sure we can open up very rationally and cautiously, so that we can restart the economy without any big setbacks — and as you look into workplaces and other areas, being able to provide this disinfection will definitely help that.”

How germ-zapping Xenex robots are used in offices

This type of ultraviolet light is not normally present in the Earth’s atmosphere, meaning pathogens such as viruses and bacteria have never been exposed to it before, and have no defence against it.

It is used in a process known as germicidal irradiation. When the robot “zaps” an area with this light, all surfaces within a two-metre radius are sterilised more effectively — and more quickly — than with traditional cleaning methods.

Today, the LightStrike robot has been deployed in about 600 hospitals worldwide, predominantly across the US, but also in a handful of countries including the UK, Spain, Italy, Japan, South Korea, South Africa and Ecuador.

And, according to Stibich, the screen at Xenex’s headquarters in San Antonio, Texas, which displays information about how its robots are being used, indicates more than 22.7 million disinfection cycles have taken place.

This equates to one cycle being run every 4.5 seconds.

The coronavirus outbreak — which has infected more than five million people and caused 325,000 deaths as of 21 May — has led to an “incredible” increase in demand for Xenex’s product, with Italy and Japan, in particular, placing orders for dozens of the robots.

Stibich said: “The pandemic has changed everything — not just the demand for the robot but also the places the robot is going.

“We’re not really sleeping very much. We’re working seven days a week and as close to 24 hours a day as we can to build the robots because there’s a backlog right now.”

Xenex recently tested its robot specifically on SARS-CoV-2 — the virus that causes Covid-19 — in a biomedical lab in Texas, and found that, in two minutes, it was able to achieve a reduction of the virus greater than 99.99% within a one-metre radius.

The disinfection services firm also tested the robot on an N95 respirator mask, which is a device often used to help severely ill coronavirus patients breathe, and achieved the same 99.99% reduction of the virus in about five minutes.

“We know we kill the virus and we’ve validated what the robot can do,” said Stibich.

“What I hope we’ll see now is an investment in infection control infrastructure because clearly, everywhere in the world, that has not been at the level society needs it to be.”

The return to normality

While the primary concern is still preventing infections and ultimately saving lives, particularly in many of the worst-hit countries across the world, the post-coronavirus return to work is also being given increasing consideration.

This is due in no small part to the numerous economic crises the pandemic has sparked over the past few months.

And Stibich, whose background is in epidemiology, believes Xenex’s robots can help this return to normality on multiple fronts.

“As countries open up again, I think it’s even more important we make sure emergency rooms, treatment areas and other healthcare settings are safe, because we don’t want any setbacks right now.

“We designed the robot for the healthcare setting, and it translates well into a lot of other environments, but there are other specific areas like aeroplanes where we might have to make adaptations — and we’re making those as quickly as we can.”

While the LightStrike robot has mainly been deployed in smaller rooms — such as wards with a handful of beds, and bathrooms — in hospitals, Xenex has recently worked with several pharmaceutical companies to test its effectiveness in some of their cleanrooms and manufacturing areas, which are larger, more open spaces.

“In our typical protocol, we estimate the light disinfects everything within about two metres — but the light doesn’t just stop at two metres, it obviously keeps going, and we have data indicating this anywhere from four to six metres out from the robot,” Stibich said.

To disinfect larger spaces, Stibich added that the robot would either have to be run for a longer period in each position it’s placed in, or it would be placed in extra positions in the room and moved around more to cover a greater area.

The LightStrike robots are equipped with what is essentially a very advanced SIM card that connects it to an IoT network, meaning each unit can report back to Xenex’s headquarters in Texas remotely.

This technology — provided by telecommunications firm AT&T — feeds Xenex real-time information on who’s used the robot, what it’s been used for and whether it’s been used correctly.

And, by combining this use data with infection rate data from the hospitals they are being deployed in, Xenex has been able to prove that its robot is lowering infection rates in these settings — and several studies indicating this trend have been published online by healthcare facilities using the LightStrike device.

Matthew Walsh, area vice president of advanced solutions at AT&T, said: “It’s exciting for us to see these use cases, and it means users [like Xenex] can deploy these devices and understand how they’re being used — rather than just being kept in the dark.

“We make it simple. We make it easy to deploy right across the world, on one single SIM, with unconscious connectivity, if you will.”

The IoT connection provided by AT&T also means upgrades, software updates, changes to the user interface and even some system repairs can be performed on the robots remotely from Xenex HQ.