George Lineker, the eldest son of Match of the Day host Gary Lineker, co-founded the app Flipper, which gives users an extra phone number so they can keep their work and private lives separate on the same mobile handset. George and business partner Leo Bartle tell Dan Robinson all about it 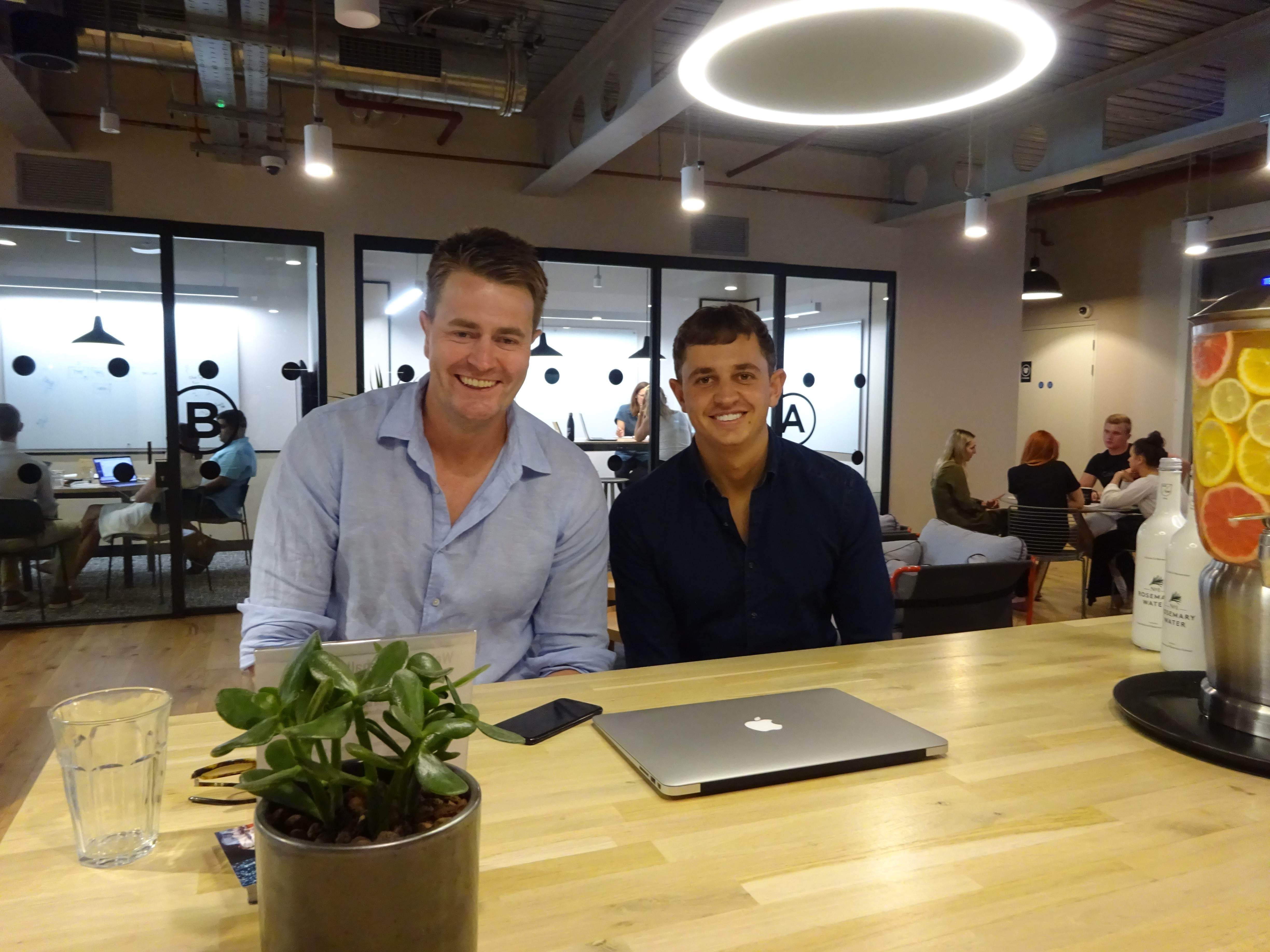 When you’re the son of one of the most successful footballers England has ever produced and a prime-time TV mainstay, it could be tempting to take a feet-up approach to life. Not if you’re George Lineker.

The eldest of former Tottenham Hotspur and Barcelona striker Gary Lineker’s four boys is one of the thousands of people who pass through the doors of the WeWork Moorgate co-working space in London each day trying to get a business idea off the ground.

His particular start-up is an app called Flipper, a simple enough concept that gives people a second phone number without having to carry around two mobile phones.

“I’ve always wanted to prove I don’t want to do nothing with my life and look like a spoilt kid,” says the 26-year-old.

“This is what I’m passionate about right now because I really think it’s a good idea. When I bought in, I decided I was going to stick with it and put all my effort into it.

“Flipper is what I see myself doing and making it as good as I can.”

George got on board with the idea after being approached by Leo Bartle, a more experienced entrepreneur who had the initial idea, and co-founded the business two years ago.

What sets Flipper apart from any rival service is the app can use infrastructure from Leo’s other company Stour Marine – one of the UK’s six mobile networks licensed by Ofcom – which he bought in 2012.

While the phone number and tariff stored in the original SIM card remains untouched, using the Stour Marine network means Flipper can create a tariff for its second number.

Leo, 34, who worked for an investment bank prior to that, says: “We saw a market for Flipper to sell to consumers who have two handsets and to give them more control and security over who has their number.

“You need a network a number and have the ability to make texts and voice calls at certain rates.

“The big networks don’t want to separate the SIM card from the network so they won’t go near this type of concept.

“But with Flipper, you don’t need a new SIM because it just sits at the top of the existing SIM card.

“It’s a disruptive new technology that removes the hassle of carrying multiple phones around and means you don’t have to compromise your private number.”

Among the 22,000 people to have downloaded the app to date is Gary Lineker.

For him, it comes in useful for keeping contacts in the media industry separate to personal numbers – a use case he outlines in a testimonial on the website.

But being the son of Match of the Day’s presenter has its pitfalls, too, as certain tabloids painted Flipper as nothing more than a tool for drug dealers and people having affairs.

George, who previously ran a music website called Getsung to help artists build fanbases, shrugs off such criticism because of his belief in his current project – while the company has links with the relevant authorities should the software get into the wrong hands.

He says: “My dad has backed it all the way. I’m obviously young and new to business but we think it has a lot of potential uses and could go far.

Bit of dinner with the lads because it’s coming home ? pic.twitter.com/DGif1i32Hn

“It might come in useful for online classified advertisers – if you’re selling something on Auto Trader but don’t want to give out your number – or online dating.

“Someone who is job hunting might receive lots of calls from recruiters so it’s useful for them, too.”

While it may be a relatively new concept to the UK, it already has a strong market in the United States, where there are about half a dozen similar apps.

Leo explains: “WeWork is full of start-ups in different industries but if we ask them if they’ve heard about this product in the UK, I don’t think many of them will say ‘yes’.”

Today is taking me back to when I had my first cap at the old Wembley. Come on the boys ? pic.twitter.com/KmPyeAWdqi

“With new tech, it’s about challenging the mentality of people and letting them know what’s possible – telling them they don’t need to carry around two handsets.”

“This concept has been proven in the US and we want to reflect that in the UK.

“The market here is smaller but I think some US companies will come over, which we’re not against because someone needs to make a big buzz around it.

“Because I own the network and have shares in Flipper, it means we have the best potential from a pricing point of view.”

George Lineker on trying to take Flipper to businesses

Flipper has four packages available, with subscriptions of between one and 12 months costing between £1.99 and £3.99 per month through an Apple iTunes account.

Each comes with 50p credit each month, with texts then costing 4p to send and calls charged at 4p per minute, or 2p to a landline.

While individuals may be reluctant to pay extra when they are already forking out for a contract, the Flipper duo are now targeting the business-to-business (B2B) model.

Many companies that require staff to have a work mobile number will buy handsets but Flipper could negate that by simply adding a second number to their personal phone, which can be switched on and off at any time.

George and Leo have already held discussions with a media company with more than 200 staff about such a deal.

“If we can get it into the B2B market, we can really save companies money in the long run because they won’t need to buy two handsets.

“The way we’re going, landline office phones aren’t really as essential now as they once were because everyone is on their mobile – but they don’t want to get pestered by clients all the time.”

The duo, who have previously received £60,000 in financial support to get up and running are now looking for a further £150,000 in investment.

This would fund new features, such as enabling account holders to have more phone numbers, and for marketing to take the app to a wider audience.

George – whose two youngest brothers, aged 21 and 22, are studying at Oxford Brookes University, while his 25-year-old sibling works for their dad’s sports film production company – says: “Getting it out there has been one of the biggest challenges.

“We’ve never had a budget for marketing and have just used social media, with some help from friends I have in reality TV and my dad.

“That gets the word out but it’s not necessarily the market we’re looking for, which is why we want to raise this investment.”

Leo says: “We need to scale up and improve the technology at the back end. But it’s about changing the mindset.

“Mine and George’s job is done once we make sure the UK knows the app exists and see a need for it.”

The start-up now has one full-time and two freelance software engineers and the business partners believe there’s no reason why it can’t really take-off if given more backing.

Leo adds: “I personally think the sky is the limit with this. There are 65 million people in this country and maybe 80 million handsets.

“Technology is always moving and the way we could maybe take this forward could be in terms of using data and having different numbers for whichever country you’re in.”