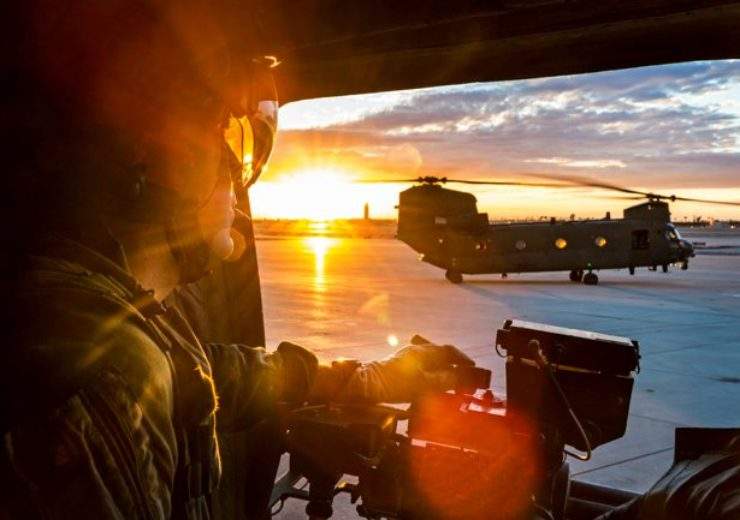 AI-enabled video surveillance, autonomous eight-wheelers and a device for remotely taking down drones account for just a fraction of the future military technology set to define the global defence industry.

The Exercise Autonomous Warrior event in Wiltshire, UK, which ran from 12 November to 12 December, showcased these innovations along with a plethora of others designed by niche specialists and global conglomerates alike.

Run by the Ministry of Defence, the event was labelled an “Army warfighting experiment” trialling prototype unmanned aerial equipment, unmanned ground vehicles and supporting software aimed at reducing the danger to troops during combat.

Here we profile nine of the most revolutionary future military technology.

QinetiQ’s Titan Strike and Titan Sentry models are entirely autonomous and are designed to work in tandem in order to help troops track and engage enemy forces from positions that would typically be too dangerous to occupy in person.

The machines are operated by a soldier who remains in a remote and protected vehicle for the duration of use, with the Sentry model using radar and cameras to track targets and the Strike using its weapon station to fire.

The company argues its two models will help reduce the risk to human personnel on the field and mitigate the cognitive burdens they face by allowing them to oversee missions from a safe and defensible distance.

QinetiQ has offices dotted all across the UK and comprises more than 6,000 employees.

Founded 45 years ago, AeroVironment has long pedigree in the military aviation sector and one of its latest creations is the hand-launched Puma AE.

Launched by hand, the model is battery-powered, has a range of 20km and can last a maximum of two-and-a-half hours in the air.

During flight, its i45 gimbaled payload – a pivoted support system – allows it to take high resolution imagery of the landscape below, complete with a 50-times zoom, low light detection and night vision.

Headquartered in Paris, Thales designs electrical and software systems for the aerospace, security and defence industries.

Its Digital Crew system is an AI tool that provides continuous and automated video surveillance.

The system can be linked to multiple cameras at once, providing a holistic view of a particular facility, and is able to identify anomalies and objects of interest using an advanced system of deep learning.

This allows Digital Crew to alert operators to possible threats quickly and efficiently.

It’s also able to identify individual faces or vehicles, and has in-built training protocols to enable operators to bring it up to speed with new threats.

Thales argues its greatest benefit is the fact it can operate 24 hours a day and doesn’t suffer from fatigue the same way a human does, which can lead to oversight and errors in judgement.

Insitu is a subsidiary of Boeing, an American multinational corporation that designs, manufactures and sells airplanes, rockets, satellites and missiles.

Its Integrator model is a versatile form of unmanned aircraft that carries multiple sensors and is designed for surveillance and communications.

It has a 20-hour maximum flight time, and is built with additional structural integrity to help it carry considerably heavier payloads than other models in its class.

It is controlled remotely by a ground control system equipped with a data link, and features a 4km view range, allowing it to capture a comprehensive picture of any battlefield extremely quickly and discretely.

Drone Ops researches and develops technological capabilities for drones in the commercial, security and defence sectors.

Its GPR Drone is a small tool used for detection and mapping operations using its radar system.

It comprises a heavy lift drone with an advanced radar system that collects and deciphers visual data to help operators identify objects on the ground below it.

This is said to be the first radar-enabled product of its kind to be brought to the market.

Düsseldorf-based Rheinmetall is an international technology group specialising in security and mobility.

Its Mission Master model is an autonomous, eight-wheel ground vehicle that can adapt its layout depending on what it’s needed for.

For instance, it can be configured to work as a cargo mule, a surveillance asset, a medical evacuation platform or as a defence tool.

Once it has been deployed for its specific purpose, it enters a completely autonomous mode that works by using sensors that detect obstacles in its path.

The Mission Master also has a follow-me mode that allows it to tail other vehicles or troops, and should it require human input it can also be remotely controlled.

Easibridge offers a unique form of lightweight, dynamic bridge construction that allows soldiers to quickly and easily install a bridge of up to 18 metres so they can traverse ravines and dangerous terrain.

The bridge can be set in place by a single operative, features noise-cancelling material so there’s less chance of detection by nearby enemy soldiers, and can be recovered as quickly as they are laid down.

The company says its tool will provide a building block for a huge range of mobility, access and troop protection challenge.

Its IXI EW Dronekiller is a handheld tool that uses radio frequency disruption technology to knock drones out of the sky.

The product is equipped with advanced receivers, processors and transmitters, in addition to software algorithms that allow it to identify targets with precision.

Any drone operating within 1,000 metres can be remotely deactivated by the lightweight and compact tool.

Polaris’ MRZR X is a modular support vehicle that can be driverless or operated by troops.

It’s designed to create a transition point between autonomous vehicles and manned vehicles, allowing for benefits like an automated follow mode and remote control while also maintaining traditional human-operated features like a steering wheel and driver’s seat.