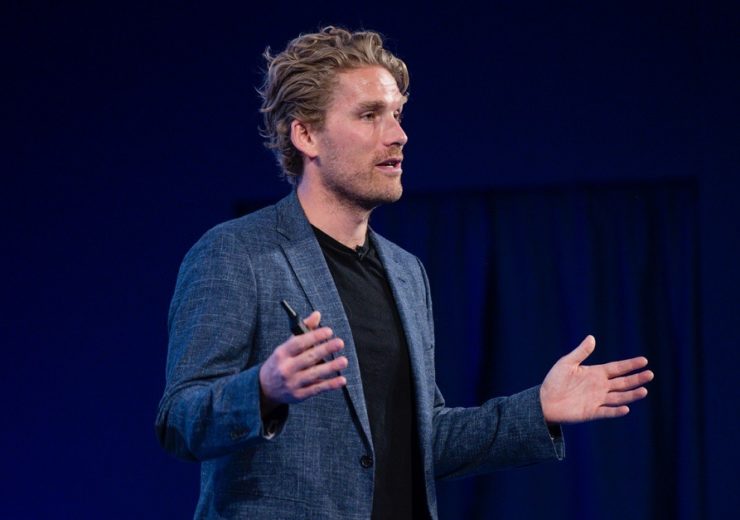 Rasmus Ankersen speaks during the Wharton Global Forum in London

Football analytics have been used to help FC Midtjylland win the Danish Superliga for the first time in their history and could have shown how a successful season for Newcastle United was based on unsustainable results. Author and football club chairman Rasmus Ankersen explains why in a speech at the Wharton Global Forum in London, where Dan Robinson is in attendance.

A six-pointer, game of two halves and players being “on the beach” – just some of the over-used clichés in football.

The “league table doesn’t lie” is another line trotted out by pundits, journalists and fans at the end of a season, with the implication being that quality will always overcome luck over the course of a campaign that usually lasts somewhere between 34 and 46 games, depending on the league.

But when pre-season relegation contenders Newcastle United defied the odds to finish fifth in the 2011-12 English Premier League season – their highest position in the past 15 years – chance could indeed have played a big part of their success if data analytics are applied.

The fact they followed it up with a 16th-place finish the following season strengthens the argument for Rasmus Ankersen, a football club director who has written a book on how successful organisations can continue to prosper by eliminating complacency, called Hunger in Paradise.

“That was an amazing achievement because everyone thought Newcastle would be battling to avoid relegation that season,” he says.

“So they awarded the head coach with a historic eight-year contract and did all they could to keep the squad together for the following season.

“They had the same players and coaching staff, and were playing in the same stadiums. So how could a largely unchanged team go from fifth to 16th in a season?

“In football, there’s a popular expression that ‘the league table never lies’. It kind of assumes that, after the last game of the season, the best performing team is at the top and the worst is at the bottom – everyone gets what they deserved.

“But it’s not that simple.”

As someone who works for professional gambler Matthew Benham as chairman of Danish outfit FC Midtjylland and director of football at English Championship side Brentford, it’s unsurprising he adopts a different mentality when it comes to analysing football.

“If you want to understand how a gambler thinks, the fundamental mindset is the league table always lies,” explains Rasmus, who is delivering a keynote speech at the Wharton Global Forum – a conference hosted by the Wharton School at the University of Pennsylvania – in London.

“Because they understand there’s so much randomness in football compared to a sport like basketball.

“On average, there are more than 100 points in a basketball game and 2.8 goals in a football match.

“The fewer goals means the bigger risk of something random happening, whether it’s hitting the post or a referee making a key decision at the end of the game.

“So the best team wins less often in low-scoring sports like football.”

While many football fans placing a bet on a game will draw guidance from the league table, a gambler will never look at the standings, claims Rasmus.

Instead, they are more interested in the under-lying performance – “how has that team really been doing and where are they likely to go in the future?”

In the case of Newcastle’s fifth-place finish seven years ago, Rasmus is keen to point out some key stats that may not have mattered to fans at the time, but should have demanded closer inspection by club chiefs in the post-season debrief.

The Magpies’ goal difference of plus-five was the lowest in the top eight and far behind the rest of the top six, with sixth-placed Chelsea’s plus-19 the nearest.

Eight of their 19 wins were by a single goal, while they also lost by at least a three-goal margin on four occasions.

Opponents produced 1.4 more shots on goal than Newcastle did in games on average.

Player stats were also interesting. Papiss Cisse, a striker signed in January, converted 33% of his shots to score 13 goals in 14 games, helping his team to win eight of those matches.

In contrast, Barcelona superstar Lionel Messi, widely considered as one of the greatest players of all time, may have scored 50 league goals the same season but had a conversion rate of 20%.

The stars had seemingly aligned for Newcastle but, with a Europa League campaign the following season that added 14 extra games on a squad that was only strengthened with a single signing, perhaps the writing was on the wall.

Rasmus adds: “How effective is that goal difference of plus-five in a sport with a high degree of randomness?

“The analytics show that clearly they don’t belong in this company, and the gamblers were convinced it was a fragile existence.

“You can handle it for one year but not over time, and that’s why gamblers predicted Newcastle’s results would regress the following season.”

Lessons of football analytics for businesses

When the numbers are laid out in plain sight, it feels odd that Newcastle’s hierarchy would hand their manager Alan Pardew with an eight-year contract that summer – he would only last another two-and-a-half years – and not try to address the unsustainable element of their success.

“I think they were blinded by one of the most common management failures – that results are always the consequences of good decisions and good performances,” says Rasmus.

“Success turns luck into genius. It’s very natural to ask the tough questions when we fail, but when we’re successful, we sometimes expect the results to continue automatically.

“It’s an emotional industry but a good gambler treats success with the same scepticism as failure.”

CEOs of companies outside sport can learn from this, he believes, by never trusting success blindingly.

“For your organisation, how can you use data to separate skill from luck?” he adds.

“And how do we deal with a great outcome that wasn’t expected?”

How FC Midtjylland set the bar for football analytics

In his dual roles at FC Midtjylland and Brentford, Rasmus has heeded these lessons and helped two relatively small clubs build a reputation for using sports analytics to compete above their level.

The Danish Superliga minnows have been nicknamed “Moneyball FC” after adopting a similar strategy to the Oakland Athletics baseball team chronicled in the best-selling Michael Lewis book Moneyball: The Art of Winning an Unfair Game.

They have won the league title twice in the past five years – their only two championships in a 20-year history – and also famously caused a significant upset by winning 2-1 against Manchester United, one of the most financially powerful clubs in world football, in a Europa League tie in February 2016.

Brentford, meanwhile, have arguably punched above their weight and, in 2015, finished fifth in the Championship – their highest position since 1947.

The main link between the clubs is their owner Benham, who set up Smartodds – a betting company that uses mathematical models to predict football results.

He has previously spoken about wanting to hit key performance indicators, rather than just results.

In a rare interview with AtTheMatch, Benham said: “I am not just talking about whether a team wins or loses or scores or not because there is a huge amount of what we call ‘noise’ in that statistic.

“I want to look at the number and quality of the chances they created. If I am looking at a striker I absolutely do not care about his goalscoring record.

“For me, the only thing that is interesting is how the team do collectively, offensively and defensively within the context of an individual’s performance.”

At the time, Brentford were third in League One, a position below the automatic promotion spot, with five games remaining of the 2013-14 season.

“I said to Matthew, ‘what’s your gut feeling telling you? Do you think you’ll get promoted?’” Rasmus says.

“I realised then that I’d met someone with a completely different view of the game to anyone I’d met before.”

Manager Kenneth Andersen has in-game statistics, such as the number of chances and half-chances for each team, available to him to shape his half-time team talks by giving him a more accurate assessment of how a scoreline reflects the match.

Coaches also study analytics and video clips at length when planning corners and free-kicks in a “set-piece lounge”.

It’s clearly having an impact, with half the goals scored in the 2015 title-winning season coming from set pieces.

When it comes to player recruitment, the club has a database that can scour the world for certain types of players that fit certain requirements.

They’ll be thoroughly scouted too, but sometimes the experts will be overruled by more data analysis.

Rasmus explains: “If we’re looking to buy a player from a club, we’ll do a lot of research in that club’s fans’ forums.

“Our idea is if 1,000 fans have seen a player 50 times each, and there’s a consistent pattern in what they’re saying, then it’s probably right.

“The scouts probably won’t agree with me but as a CEO, you have to be able to defend those principles.”

He acknowledges there will sometimes be friction between the analysts and the experts, with both having an “arrogance” about whose opinion should matter most.

“In football, there’s a disconnect between the IQ guys – those who are crunching the data – and the EQ guys, who are the football people using their intuition.

“The data guys will talk about pass completion rates but they don’t ask the coaches that it means to their team, while the experts don’t always think the stats are relevant.

“Dialogue is critically important in a highly analytical business.”

What FC Midtjylland learned from companies including LEGO

Despite FC Midtjylland confounding expectations to win the Superliga in 2015 and 2018, Rasmus believes the club got a little complacent.

To stop this from setting in, he drew inspiration from other businesses that have viewed their achievements as part of a much wider picture.

Danish toy giant LEGO, for example, has not rested on its laurels in leaving behind competitors in the children’s toy market.

After a successful year of results, then-CEO Jørgen Vig Knudstorp asked whether the company was actually competing against the toy industry, or against everything else on which a child would want to spend their money.

“He talked about how an 11-year-old boy goes to the shop, he doesn’t just buy a LEGO set – he might get a football shirt or an iPhone,” says Rasmus.

“Coca-Cola has discussed this too. It put Pepsi into second place but said ‘what if we’re competing in the industry for every liquid that can go into your body?’

“By moving the battlefield, it creates psychological discomfort and shapes the perception you have about your potential. Yes we’ve reached the top of the hill, but there’s still a mountain to climb.”

Rasmus came up with a way of reshaping how the club assessed itself in the market by creating a new ten-team league table – not just featuring Danish clubs but with high-ranking teams from other leagues across Europe, including the likes of Lazio, Sevilla, FC Basel and RB Salzburg.

In November last year, FC Midtjylland ranked bottom according to the metric system he designed, but have slowly climbed this imaginary mini-table.

“I call it ‘burn your trophies’. A successful organisation will always strive to do more.”