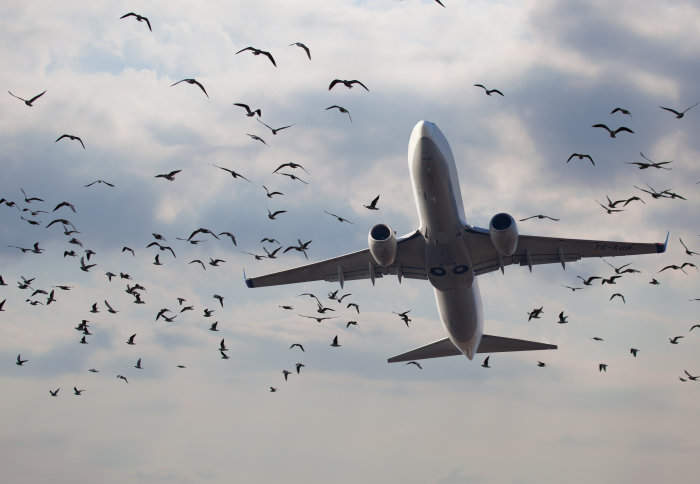 Bird strikes have caused issues in destabilising aircraft, most famously in the 'Miracle on the Hudson' in 2009

Is it a bird, is it a plane? No, it’s a drone – stopping birds from hitting the plane.

That’s because autonomous drones could soon be herding flocks of birds away from busy airspace after scientists developed new technology – inspired by the “Miracle on the Hudson”.

A global team from CalTech, Imperial College London and the Korea Advanced Institute of Science and Technology (KAIST) tested an AI algorithm on a drone near a field in Daejeon, South Korea.

The inspiration came from the 2009 “Miracle on the Hudson”, when US Airways Flight 1549 hit a flock of geese immediately after takeoff and pilots Chesley Sullenberger and Jeffrey Skiles were forced to land in the Hudson River close to Manhattan.

The incident was dramatised in the Tom Hanks film Sully in 2016.

Soon-Jo Chung, a researcher at CalTech and the principal investigator on the drone-herding project, said: “The passengers on Flight 1549 were only saved because the pilots were so skilled.

“It made me think that next time might not have such a happy ending.

“So I started looking into ways to protect airspace from birds by leveraging my research areas in autonomy and robotics.”

The team published its findings in the IEEE Transactions on Robotics paper.

Birds usually crash into the engine or cockpit windows, meaning the plane must land to be inspected for any possible damage that could cause problems when the vehicle is in flight.

This means passengers are forced onto alternative flight, at huge costs to the airlines, estimated to total $500m per year for those in North America alone.

Dr Paranjape from Imperial’s department of aeronautics said: “Bird strikes are responsible for many unpleasant, and even potentially fatal, incidents in aviation.”

One of the most famous bird-strike aviation incidents was the “Miracle of the Hudson”, which resulted in the aircraft losing all engine power and unable to reach any airport.

But due to the skilled gliding of the plane by its pilots, all 155 passengers survived with few serious injuries, as the National Transportation Safety Board called it the “most successful ditching in aviation history”.

At the moment, efforts to minimise the number of bird strikes centre on preventing the feathered flyers from entering airspace at all, to protect both them and a plane’s passengers.

These include using trained falcons and predatory bird audio recordings to deter the birds, or human-piloted drones to scare them off, both of which can be costly and unreliable.

Mr Chung said: “When herding birds away from an airspace, you have to be very careful in how you position your drone.

“If it’s too far away, it won’t move the flock. And if it gets too close, you risk scattering the flock and making it completely uncontrollable.

“That’s difficult to do with a piloted drone.”

How the drones work

To teach the drone to herd without human input, the team of scientists created a mathematical model of flocking dynamics, which improves on the existing algorithms designed for herding sheep.

It describes how flocks build and maintain formations, how they respond to threats along the edge of the flock, and how they then communicate that threat through the flock.

The researchers then reverse-engineered this algorithm to see exactly how approaching external threats would be responded to by flocks of birds.

This enabled them to design a new herding algorithm, which produces ideal flight paths for incoming drones to move the flock away from a protected airspace.

“My previous research focused on spacecraft and drone swarms, which turned out to be surprisingly relevant for this project,” added Mr Chung.