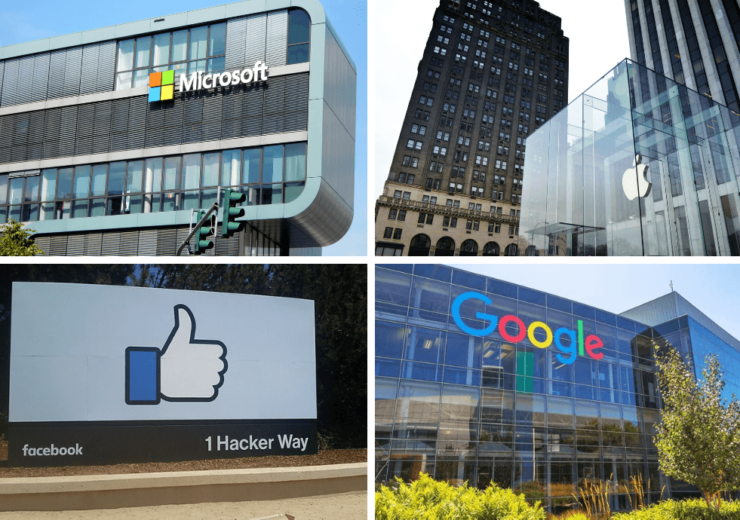 From the iPhone to social media, the biggest tech companies in the world are responsible for innovations that have changed our lives as we know it – and now the firms can be ranked according to their market cap.

The latest list by data analytics firm GlobalData includes a new number one, a few shake-ups and several names that might not be as familiar as others.

Unlike market value, market capitalisation is calculated by multiplying the total number of shares by the value of a single share at a given time.

Because of this, certain household names, such as Uber and Airbnb, do not feature on the list because they have yet to go public.

Keshav Kumar Jha, companies profile analyst at GlobalData, which took a snapshot from December 2018 to rank the firms, said: “2018 has been a successful year for major enterprise software companies, during which Microsoft, Adobe, Salesforce and VMware reported double-digit increase in their market cap.

“IT services providers such as TCS, ADP and Infosys seemed to have impressed investors with over 10% increase in their market cap.

“On the other hand, major semiconductor manufacturers including Intel, Samsung, SK Hynix, Taiwan Semiconductor and Texas Instruments reported a decline in their M Cap last year.”

Here we profile the world’s 25 biggest companies according to their market cap.

Microsoft was briefly a member of the trillion-dollar club as the technology company found itself moving up the market cap rankings to steal top spot.

The Bill Gates-founded firm’s recent change of fortunes can be attributed to a change of focus at the company – the shift to sharing ideas across departments and the success of its Azure cloud computing service.

Technology hardware company Apple was knocked from the top spot in the table of market cap.

But it hopes to make up ground through pivoting to streaming services, such as Apple Music and Apple TV, in the future.

Alphabet, the parent company of Google, has also suffered a recent shares drop which has influenced its market cap.

The conglomerate posted lower than expected sales, while a string of incidents concerning the promotion of extremism, staff walkouts and privacy concerns on its platforms have also contributed to the slump.

Although Facebook has faced a similarly lengthy list of challenges this year, the company’s performance was helped by record revenue growth in the first three months of the year.

The social media platform is also continuing to divest in other technology enterprises to supplement its earnings.

Samsung remains the world’s biggest smartphone and memory chip maker and is the first non-US based company to make the list.

However, the South Korean firm posted its worst net profit in two years, amid a growing number of competitors in the mobile chip market and a string of negative press surrounding the launch of its flagship foldable phone.

Once a leading creator of computer components during the PC boom of the early 2000s, Intel now plays second fiddle to the mobile technology giants.

The US tech firm’s shares recently had their worst performing day in over a decade and prompted it to slash its revenue forecasts.

Taiwan Semiconductor Manufacturing Company is the largest semiconductor foundry in the world.

Many technology manufacturers count themselves as customers of the Taiwanese company, including NVIDIA, Qualcomm and AMD.

It has a market cap of $162bn (£125bn) and its stocks have been on a continual rise since the start of the year.

The company now competes with the US technology firm and boasts 425,000 customers in over 180 countries.

Adobe is known for its creative suite of software programmes.

The California-based company registered $9bn (£6.9bn) in revenue last year and has moved up five places in terms of market cap to tenth position.

Founded by former Oracle executive Marc Benioff in 1999, it has quickly grown to compete with the top tech companies.

Tata Consultancy Services is the top Indian firm to make it onto the top 25 list of technology companies by market cap.

The IT consultancy company, which has headquarters in Mumbai, has moved up in this year’s table but is currently facing a lawsuit over alleged theft of trade secrets from Computer Sciences Corp.

Broadcom is a US-based semiconductor manufacturer and software designer and developer.

The performance of stocks in the company are outperforming the rest of the market but this has yet to have a major impact on its positioning in terms of market capitalisation.

IBM  – or International Business Machines to give it full name treatment – is headquartered in New York and has operations in over 170 countries.

It is traditionally known for selling computer hardware and as the inventor of the ATM, floppy disk and hard drive, but more recently has been involved in artificial intelligence and supercomputer projects such as Watson.

Texas Instruments is another semiconductor design and manufacturing company, and is headquartered in Dallas.

Its products are used in the industrial and medical equipment sectors.

Computer chip and graphics processing unit producer NVIDIA has seen its market cap grow but has been outpaced by other tech companies.

ASML Holding is a Dutch company that essentially makes the machines that make the machines.

It is the biggest supplier of  photolithography systems in the world – a type of technology that uses light to map out patterns for circuit boards and computer chips.

Sony Pictures, which produced the 2017 Jumanji  remake and Spider-Man: Homecoming, reported a 30% rise in profits, but its mobile subsidiary is struggling and could lay off 2,000 employees to cut costs.

Its market cap increased along with its position in the top 25.

VMware provides cloud computing and computer visualisation for other enterprises.

Financial and business software company Intuit is known for its flagship accountancy software QuickBooks, which is used by 5.6 million small to medium-sized businesses worldwide.

Its US consumer programme TurboTax, for personal tax filing, has lobbied against the Internal Revenue Service creating a free digital tax system.

It has offices across India, the US, China, Australia, Japan and Europe, and saw its market cap ranking go up by six places in this year’s table.

The technology, which has its headquarters in South Korea, produces computer parts that are used in Apple’s iMac and MacBook products.

US computer technology company Dell produces laptops and computers for a global market.

It is predicted to be one of several companies on this list that will benefit from a fall in computer chip prices.