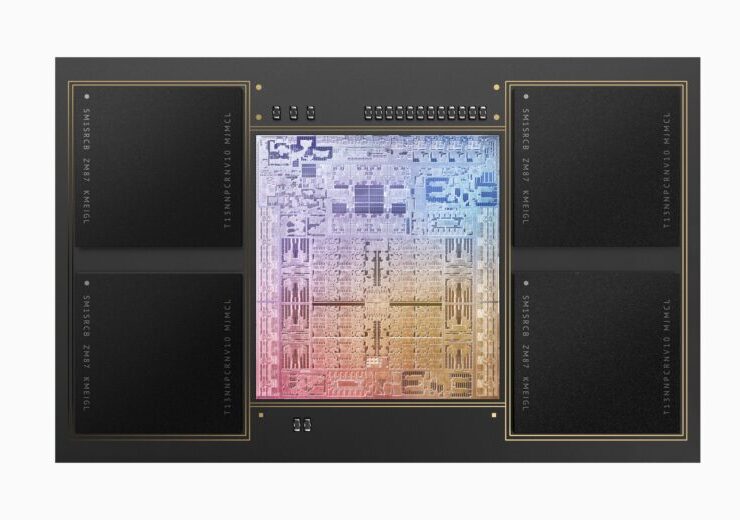 M1 Max is said to be the largest chip Apple has ever built. (Credit: Apple Inc.)

According to the company, M1 Pro and M1 Max are the most powerful chips it has built to date.

The company said that the central processing unit (CPU) in M1 Pro and M1 Max delivers performance that is up to 70% faster than M1. This means tasks such as compiling projects in Xcode are faster than before.

Apple claimed that the graphics processing unit (GPU) in M1 Pro is up to twice faster than M1. On the other hand, M1 Max is four times faster than M1, which enables pro users to ease through even the most demanding graphics workflows.

The M1 Pro and M1 Max chips, which bring a system-on-a-chip (SoC) architecture to pro systems for the first time, feature fast unified memory. Besides, the chips come with superior performance per watt and power efficiency in addition to increased memory bandwidth as well as capacity.

M1 Max provides support for unified memory of up to 64GB.

M1 Max has the same 10-core CPU as M1 Pro, while adding a 32-core GPU. It contains 57 billion transistors, making it the largest chip to have been built by Apple so far.

Apple hardware technologies senior vice president Johny Srouji said: “M1 has transformed our most popular systems with incredible performance, custom technologies, and industry-leading power efficiency. No one has ever applied a system-on-a-chip design to a pro system until today with M1 Pro and M1 Max.

“With massive gains in CPU and GPU performance, up to six times the memory bandwidth, a new media engine with ProRes accelerators, and other advanced technologies, M1 Pro and M1 Max take Apple silicon even further, and are unlike anything else in a pro notebook.”

Earlier this year, Apple announced multiple investments totalling over $430bn over the next five years in the US.