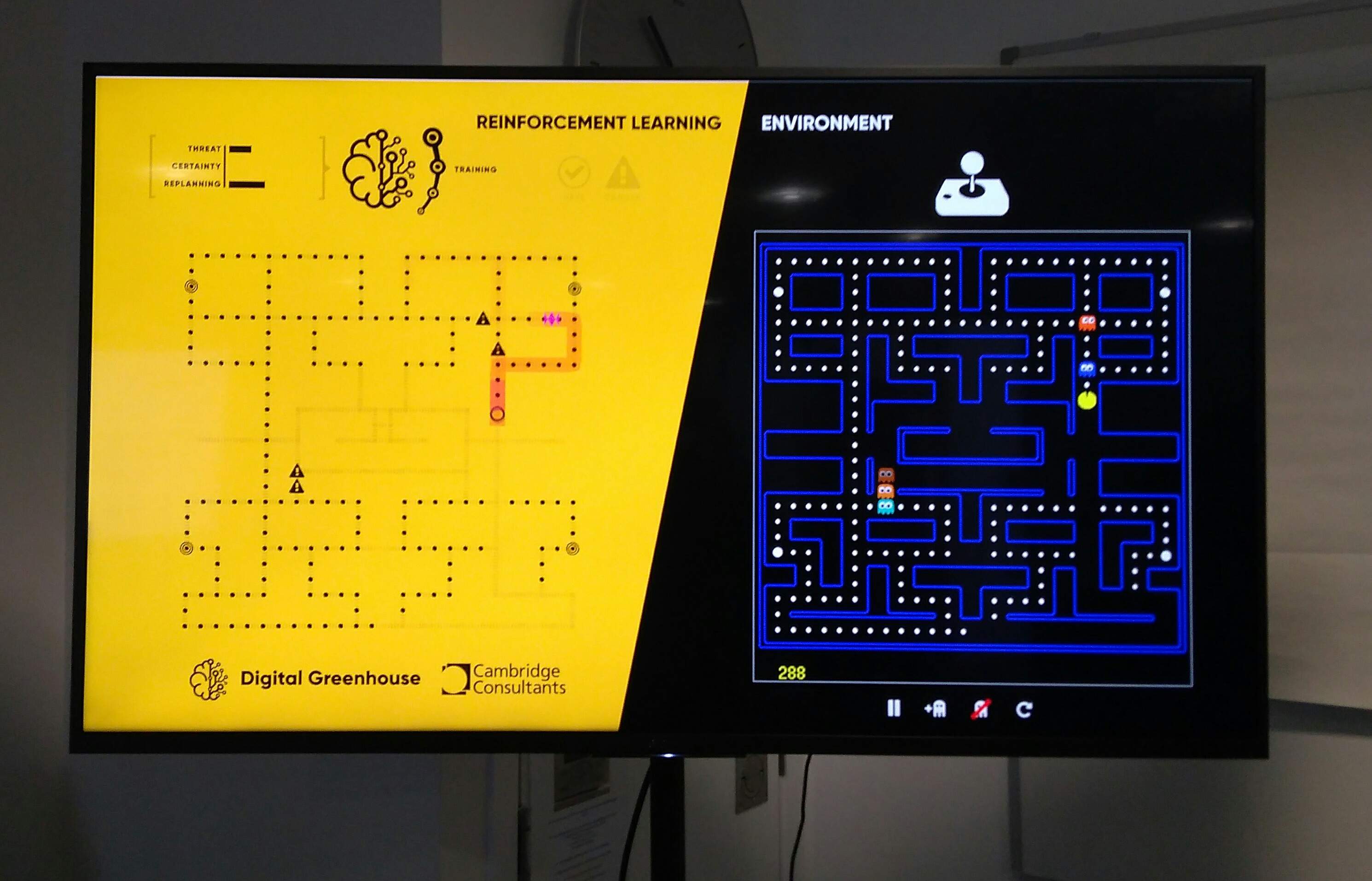 The Cambridge Consultants research team Digital Greenhouse has developed a bot player for the classic arcade game that is now good enough to rival real players.

It was not always good enough to challenge humans – moving Pac-Man back and forth with no real understanding of the game in its early learning phase.

Explaining how the AI Pac-Man bot worked at a AI demo day hosted by innovation consultancy Cambridge Consultants, senior machine learning consultant Dominic Kelly told Compelo: “We trained it without ever giving it the rules, and it had no idea what it had to do. The system was trained on thousands of hours playing Pac-Man.”

“When it first began, it basically just jumped from left to right. Slowly it figured out that the white pills are good and it would run around, but it didn’t understand that it had to avoid ghosts.

“The next step was understanding that avoiding ghosts was good, and it actually stayed that way for quite a long time.

“There’s almost a leap of understanding or logic that then has to tell it, now if it eats a capsule the ghosts turn white, and again that plateaus for quite a long time until finally it realises, ‘oh now I can eat a capsule and a ghost’.”

In the video above, the bot on the left of the screen shows when it senses danger from ghosts and what route it plans to take outlined in pink.

The artificial intelligence bot has also learned the more nuanced tricks of faring well in Pac-Man.

Compelo was told it is aware that ghosts only turn when they hit a corner.

This means it will follow right behind a ghost, collecting pills without worry – a tactic that human players would tend to avoid.

If the bot was left to its own devices for long enough, it could theoretically match the Pac-Man record score – which was set in 1999.

Billy Mitchell hit the arcade game’s maximum score of 3,333,360 points before he was stripped of the record by Guinness World Records earlier this year due to playing unregulated versions of other video games in which he had secured record scores.

While it is fun, or perhaps a bit frightening, to think that a bot powered by artificial intelligence and machine learning techniques could match the Pac-Man record score, Digital Greenhouse did not create it with that in mind.

Mr Kelly said the research team would not be looking to break the world record score with the bot.

He added: “It’s the understanding that we tried to get from the Pac-Man bot, which we can apply to much more sophisticated reinforcement learning.”

He suggested that a similar simulation for an autonomous vehicle could be used to understand what a vehicle’s AI system was planning on doing and help it avoid making bad decisions.

“Although the world records are attention-grabbing, actually teaching autonomous software safely and efficiently is a big part of what we do.”