While the US sets about decommissioning some of its largest coal-fired plants in 2019, many countries on the other side of the Atlantic Ocean have already set dates for the complete phase out of the fuel 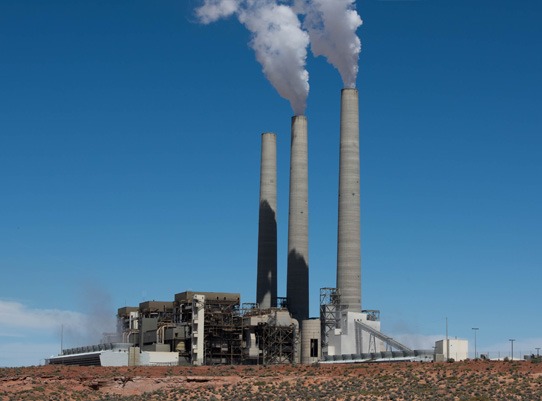 The Navajo Generating Station, located in northeastern Arizona on the Navajo Indian Reservation, serves electric customers throughout Arizona, Nevada and California. Participants in the coal-fired plant include the Bureau of Reclamation, Salt River Project (SRP), Los Angeles Department of Water and Power, Arizona Public Service Co., Nevada Power, and Tucson Electric Power. The Colorado River Basin Project Act allowed the federal government to participate in the non-federal Navajo Generating Station - NGS, near Page, Arizona, to provide power for pumping water along the Central Arizona Project - CAP aqueduct. Construction of the Navajo Generating Station began in April 1970 and was completed and placed in operation on April 30, 1976.

By the time 2019 draws to a close, three of the biggest carbon-emitting coal power plants in US history will have ceased operation as the country looks to keep pace with its allies across the pond.

Phasing out the use of coal has become part and parcel of America’s energy policy framework over the past decade, but this year feels particularly seminal, if for no other reason than the magnitude of the facilities set to shutter.

Along with millions of annual carbon emissions, the Navajo Generating Station in Arizona’s high desert, Bruce Mansfield in Pennsylvania and Kentucky’s Paradise plant represent the zenith of their industry— but now they’ve become synonymous with its transition into memory.

“Five years ago, it was about the older coal plants becoming uneconomic, but now it’s becoming about every coal unit, and it’s a question of how long they can survive.”

The three major US carbon emitters set for 2019 closure

Originally commissioned in 1974, the Navajo Generating Station is one America’s largest coal plants, with a capacity of more than 2 gigawatts (GW).

According to federal figures, the facility emitted nearly 135 million tonnes of carbon dioxide between 2010 and 2017, and its yearly output over that seven-year period matched that of 3.3 million passenger cars.

It delayed its fate in November 2017 when the Bureau of Reclamation and the Bureau of Indian Affairs approved a lease extension, giving it until 22 December to cease operation.

In addition to coal power, the Navajo Generating Station also provides power for pumping water from the Colorado River to the Central Arizona Project, supplying roughly 1.5 million acre-feet of water every year.

Its closure, which was first announced in August last year, sparked the ire of the Pennsylvania AFL-CIO, the state federation of labor unions representing 700,000 working men and women.

President Rick Bloomingdale and secretary-treasurer Frank Snyder, made the opions of their group’s members’ known in a joint statement release ahead of President Donald Trump’s visit to Monaca.

They said: “It’s a tale of two cities in western Pennsylvania — the decision to close the Bruce Mansfield coal-fired power plant in Shippingport is another example of the lack of innovation and investment in the energy industry.

“When plants like Bruce Mansfield shut down, entire communities pay the price through hundreds of lost jobs and energy rates go up for working families, as another energy source is eliminated.

“Good-paying jobs in this sector sustain our communities, and their workers keep the lights on for all of us.”

The Paradise plant in western Kentucky, meanwhile, produced more than 100 million tonnes of carbon dioxide over the seven years between 2010 and 2017.

While the US sets about decommissioning some of its largest coal-fired plants in 2019, many countries on the other side of the Atlantic have already set dates for the complete phase out of the fuel.

Coal generation in Europe dipped 19% over the first six months of 2019, according to Brussels-based think tank Sandbag, as multiple nations have started taking action to rid their energy mixes of coal before their self-imposed deadlines.

The UK became the first country in the world to officially commit to phasing-out its coal operations in 2015, just before the Paris climate meeting.

Come 2025, the country will set a limit on the amount of emissions coal-fired plants are allowed to produce, forcing those without carbon capture technology to close.

Germany, meanwhile, has historically been one of Europe’s top coal producers with an installed capacity of almost 50GW, but by 2038 it plans to phase-out all coal-fired facilities.

It marks a key element of its move towards renewable energy, following the landmark 2011 decision to phase-out the use of nuclear power by 2022.

And the Dutch government announced in its 2017 coalition pact all coal-fired plants would be closed by the end of 2029.

This comes after three of its remaining five plants were installed in the past four years, meaning they will operate for less than half their anticipated lifetime.

Progress in a number of major economies remains slow, however, with the G20 still spending a combined $60bn on coal power subsidies every year, according to the Overseas Development Institute.

India and China are among those right at the top of the list, with the former’s banking system being dominated by a variety of public institutions which combined provide more than $10bn per year in public finance for coal mining and power domestically.

The latter, meanwhile, in stark contradiction to its pledge to reduce coal consumption to 58% of its total energy mix by 2020, spends almost $10bn annually on public finance for the environmentally-damaging power source.

The approved projects include new facilities in Inner Mongolia, Xinjiang, Shanxi and Shaanxi, while Beijing, specifically, is due to increase its consumption of the commodity despite an ostensible commitment to clearing the smog and pollution that plague its streets.

Can natural gas power the transition?

The phase out of fossil fuels such as coal has led to questions over what energy sources could step in to fill the gap.

Renewables are the cleanest option, and the International Institute for Sustainable Development says transitioning to them could cost just 10% of the money currently spent on fossil fuel subsidies.

Many fear, however, that wind and solar simply don’t have the generational potential to meet the world’s energy demand on their own.

As a compromise, some analysts have pointed to natural gas – the cleanest-burning hydrocarbon, producing roughly half as much CO2 as coal, and only creating 10% of its pollution when used to create electricity.

Director of power at market intelligence firm GlobalData Harminder Singh said: “With countries across the world decommissioning or planning to decommission coal-fired power plants, the role of natural gas in the power mix is increasing significantly.

“While renewable energy is the fastest growing segment in the industry, natural gas power plants are needed to provide reliable baseload generation as well as for balancing the grid.

“In the US, existing coal-fired and oil-fired plants are being decommissioned in pursuit of emission reduction.

“The US Energy Information Administration (EIA) expects lower electricity demand, lower natural gas prices and further retirements of coal-fired capacity will reduce the amount of coal consumed for electricity generation by 8% in 2019, and by a further 6% in 2020.

“Moreover, natural gas is already the new dominant fuel in the US power sector, surpassing coal for amount of electricity generated.

“In October 2018, it provided more than 38% of power generation in the US, according to the Energy Information Administration, while coal provided less than 27%.

“This trend is expected to continue throughout 2019 as natural gas prices stay near or below the levels in 2018 (notwithstanding the current spike in prices).”