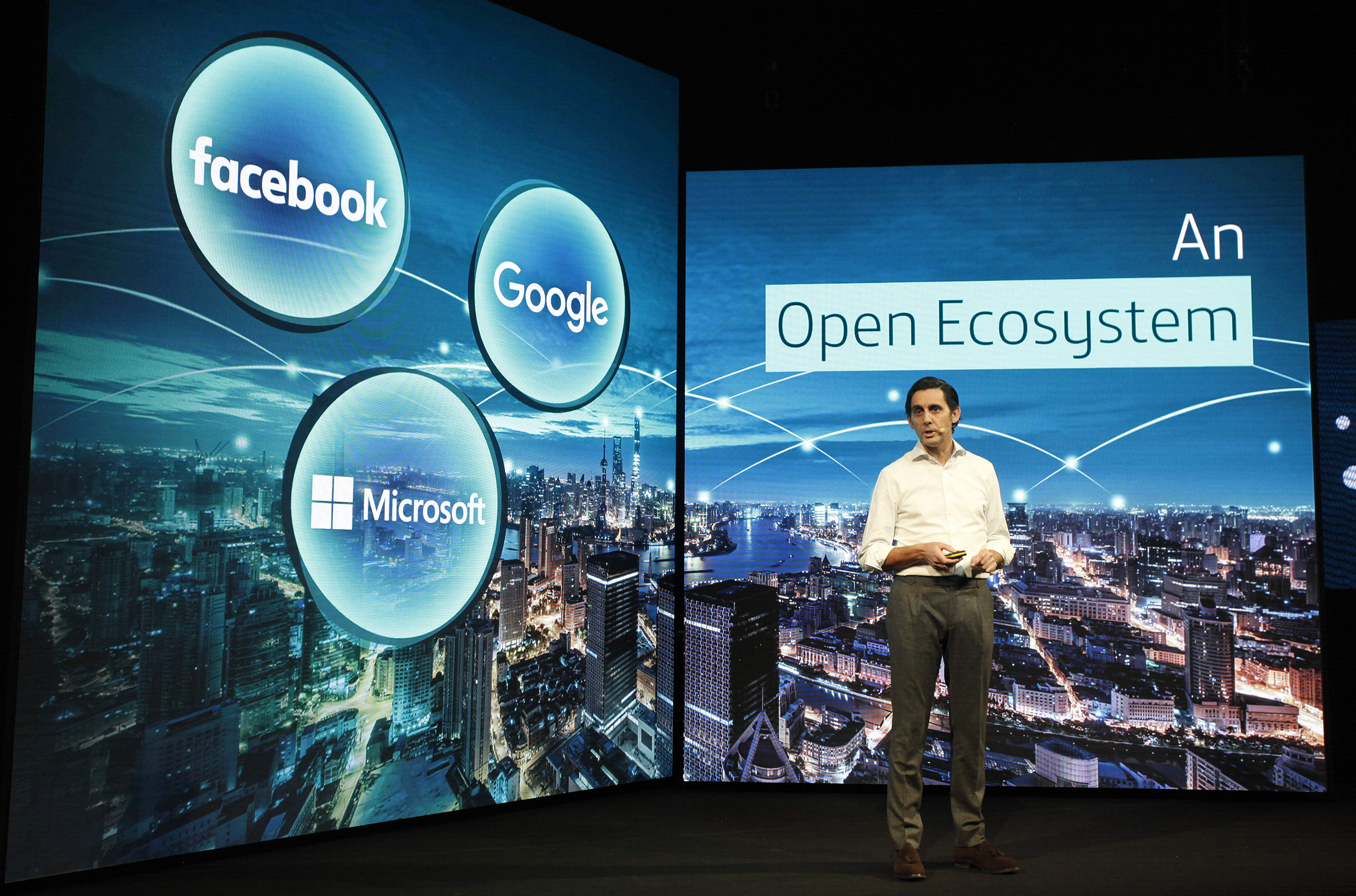 José María Álvarez-Pallete, chairman and CEO at Telefónica, speaks during the launch of the AURA digital assistant in February 2018

Telefonica plans to take on the likes of Amazon’s Alexa by opening up its own personal assistant to the retail world.

The Spanish multinational broadband and telecoms provider believes its AURA artificial intelligence (AI)-based smartphone app, launched in February this year, could become a key player in the personal assistant marketplace if it can strike deals to partner with retailers.

It shone the spotlight on the technology, along with presenting the latest developments in big data, the internet of things (IoT) and AI at its annual analyst conference.

In terms of its network and communications core business, the focus was on holistic solutions that also feature cyber security and often require selected partners to provide software, hardware and services.

Andreas Olah, lead analyst in digital retail at data and analytics company Global Data, reports his findings from the event.

Retail is key to Telefonica growth

The importance of vertical solutions was especially emphasised in presentations and discussions with executives.

Retail has been pointed out as a key vertical and retail-focused case studies featured.

It also features verticalised versions, such as the LUCA Store for retailers, which is important from a marketing perspective when targeting vertical-focused decision-makers.

In retail, there is a true hunger for using data to gain better insight about customer behaviour and optimise operations, including supply chain management in order to maintain profitable margins and improve customer service.

Another key solution that was in the centre of attention at the conference is Telefonica’s AURA AI-based personal assistant.

It is an in-house development, and is aimed at making customers’ lives more convenient at home with features such as controlling the television, browsing the Internet or launching telephone and video calls.

AURA could become even more useful if Telefonica partnered with selected retailers to enable it as a retail channel in the same way as Amazon’s Alexa – however, without being restricted to Amazon’s offerings, but enabling customers to order from their retailers instead.

Staying true to its telco origins, Telefonica’s presentations also covered the network side, which is still its core business and is essential for all the innovative new solutions mentioned earlier.

Some key expectations by senior executives include the following:

Telefonica is in a favourable position to target major retailers with its holistic and verticalised solutions that are underpinned by its strong network and cybersecurity capabilities.

Although it competes globally with the likes of BT, AT&T, Orange and Telstra, it has a unique strength with Spain-based multinationals, including major retail chains that operate globally.

Telefonica can also make use of highly valuable data from its mobile network operations in an aggregated and anonymised way that can help retailers to understand where their customers come from before visiting a store, what their age and occupation is, how frequently they visit a store, and how much time they spend there.

While Telefonica is active with retailers across many Latin American countries where it has telco operations, it still needs to build out a truly global presence to become relevant for retailers that have their origins in other major countries such as the US, China, Russia, and Australia.

A logical way to expand would be through partnerships with local suppliers and retail-focused consultancies, which could enable Telefonica to compete on compelling retail solutions in markets where local incumbent telcos cover the network side.