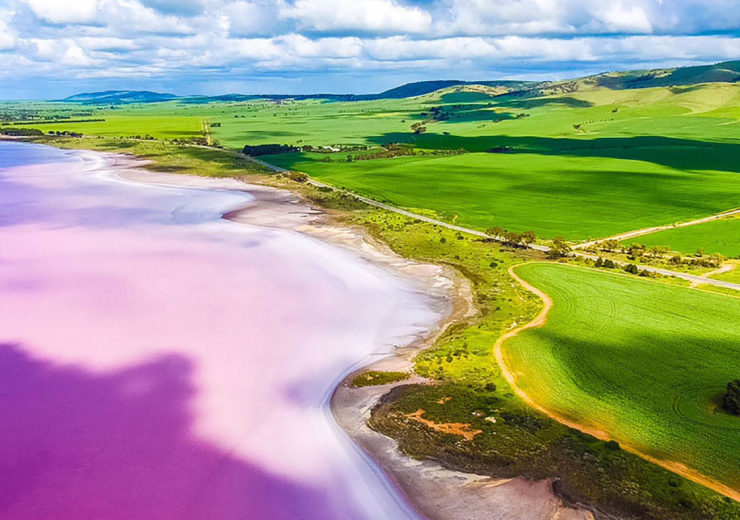 Pink Lake, in South Australia, a state that is bidding to lead the world's green hydrogen race (Credit: southaustralia.com)

South Australia has already invested huge sums into wind, solar and battery storage – and now the state has turned its attention to hydrogen in a further boost to its clean energy credentials.

The South Australian government today (24 September) released its Hydrogen Action Plan, in which it will aim to use excess renewable energy that is often stored during peak production periods in order to generate the carbon-neutral and low-cost gas.

Hydrogen can be used as a zero-emission fuel in vehicles or to produce electricity at a later time and place.

South Australia is aiming to use renewable hydrogen

South Australian premier Steven Marshall used his opening address at the International Conference on Hydrogen Safety in Adelaide to launch the project.

“In doing so, South Australia can be a trusted, long-term trading partner who shares the values of the hydrogen economy,” he added.

“We are ready to go on renewable green hydrogen and to develop a clean and safe hydrogen supply chain in South Australia, which gives confidence to consumers and investors.

“Green hydrogen will fast move from being an alternative fuel to being a mainstream zero-carbon fuel, becoming increasingly cost competitive with traditional generation.”

One-third of South Australian homes have rooftop solar which, when added to the state’s 22 major wind farms and three large-scale solar PV producers, often supply more than 100% of the state’s daytime energy demand.

It’s also home to the world’s biggest lithium-ion battery, which was built by Tesla in a bid to prevent power outages like a one that hit the state in September 2016 following a storm.

A further 40 wind and solar projects are under construction or in development, and there is now a drive to focus on energy storage and interconnection with other states.

He added: “In this scenario, storage technologies such as hydrogen are extremely attractive to our state and as a large state in area with remote communities, prospective mineral regions and long transport routes, hydrogen is an exciting, flexible fuel for the future.

“We are focused absolutely on making sure that consumers are protected and that the transition is orderly and affordable.

“We’ve heard loud and clear our traditional trading partners signalling their enormous ambitions for hydrogen and we want to deepen our existing relationships by together demonstrating and growing a hydrogen economy.”

South Australia was the first Australian jurisdiction to develop a plan to accelerate a hydrogen economy with the release in 2017 of a Hydrogen Roadmap.

“Since South Australia’s strategy was launched there has been considerable momentum here and internationally, now we’re ready to take the next steps to accelerate transition from a roadmap to a plan of action.

“We are at ground zero for this transition.”