The search engine that plants trees: What is Ecosia?

Ecosia, billed as the search engine that plants trees and powered by Microsoft Bing technology, is in talks to buy the last remaining stretch of Hambach Forest in Germany from energy firm RWE to stave off the threat of coal mining 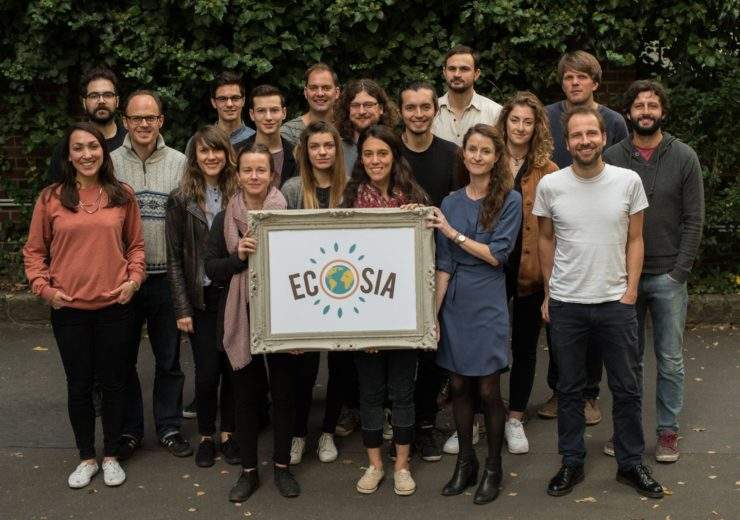 The Ecosia team at its Berlin office (Credit: Ecosia)

A one million euros (£880,000) bid to save an ancient forest in Germany from coal mining has been made by the search engine that plants trees – but Ecosia has been dutifully plying its trade for more than eight years now.

The non-profit Berlin-based internet firm donates 80% of its surplus profit from its advertising revenue to conservation organisation across the world that focus on renewing the planet’s forests.

It offered to buy from energy firm RWE the remaining 200 hectares of the 12,000-year-old Hambach forest in the western state of North Rhine-Westphalia.

Although the initial offer has been rejected, the two parties remain in talks.

The search engine that plants trees: How Ecosia could save Hambach Forest

A blog on Ecosia’s website reads: “The Hambach Forest is part of a unique primeval ecosystem. Once lost, it will be lost forever.

“Some of the trees in this very special forest are more than 350 years old. As you may know, trees are among the most efficient CO2 filters on the planet.

“If cut down, the captured CO2 is re-released into the atmosphere. Cutting down an entire forest full of such old trees to make space for unnecessary coal mining would have a devastating effect on our climate. It’s an idea we’re not willing to accept.

“This is why so many people have been trying to fight the logging of the Hambach Forest.

“We have to save the it as a unique ecosystem, as a symbol for our fight against climate change, and as a piece of precious woodland that should be accessible to everyone.”

The search engine that plants trees: How does Ecosia work?

Ecosia uses Microsoft Bing search technology enhanced with its own algorithms to run its service.

The Berlin start-up earns revenue through the adverts it displays next to its search results.

When a user clicks on one, its partner Microsoft Bing pays the company, with the average search netting it 0.5 cents (0.4p).

It then donates 80% of this profit to its tree-planting partners, which spend an average of 22 cents (19p) to plant a tree, subject to location.

Currently, Ecosia is funding the planting of a new tree roughly every two seconds.

The search engine that plants trees: When did Ecosia start?

After receiving $21,500 (£16,000) in seed capital, Ecosia was officially founded by Christian Kroll in December 2009 during the UN climate talks in Copenhagen at the time.

By 2013, it had grown to a user base of 200,000 and made a major contribution to the Plant a Half Million Trees programme run by the Nature Conservancy, which aimed to restore the Brazilian Atlantic Forest.

In 2015, Ecosia started funding reforestation in Burkina Faso, in a project backed by the African Union and the World Bank.

That year marked the point at which it had raised more than $1.5m (£1.1m) for rainforest protection since it had been founded six years earlier, while it also reached 2.5 million active users.

The following year, Ecosia ranked second in Germany for the StartupRanking list, which rates the world’s best and most promising young companies. This year, it placed top in the country and 36th overall.

The search engine that plants trees: How many trees has Ecosia planted?

The past couple of years have been a period of exponential growth for Ecosia.

In late 2016, its donations had funded the planting of five million trees since 2009, but by October this year this had increased to more than 39 million.

Now, the search engine has more than seven million active users and has donated almost seven million euros (£6m) to conservation projects around the world.

Ecosia’s work has exceeded planting trees, too, with it also taking part and contributing to Kenya’s green belt movement, which was founded by Nobel Peace Prize laureate Wangari Maathai and aims to empower the country’s rural communities.

Two years ago, the internet firm also partnered with Green Ethiopia – a foundation dedicated to improving the nutrition and quality of life of Ethiopia’s 100 million-strong population – after the country suffered a severe drought.