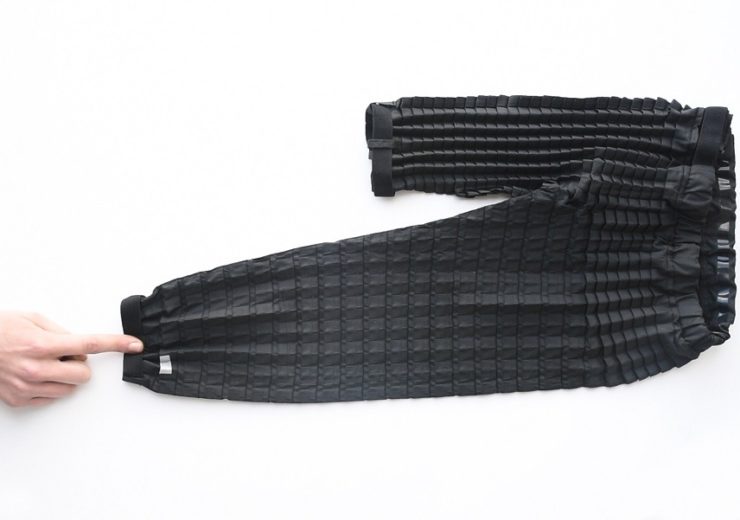 Petit Pli uses an engineering principle which allows for an item to grow in both width and length when stretched (Credit: Petit Pli)

Petit Pli is a children’s clothing company offering products that grow as the wearer ages. Here Thomas Parker speaks to the company’s CEO Ryan Mario Yasin to find out how it works, and how it can “clothe the future of humanity”

There has been rising concern over the effect the fashion industry is having on the environment over the past few years.

Natural resource consumption in the fashion industry also presents an issue, according to the Global Fashion Agenda, an organisation dedicated to achieving sustainable fashion across the world.

It estimated in 2015 that the planet’s textiles and clothing industries were responsible for the consumption of 79 billion cubic metres of water, as well as the production of 1,715 million tonnes of CO2 emissions and 92 million tonnes of waste.

In a business-as-usual scenario, these numbers would increase by at least 50% by 2030, according to the organisation.

With the environmental problems surrounding the fashion industry being as they are, it’s no wonder innovators are searching for a solution to this problem.

One such entrepreneur is Ryan Mario Yasin who, while studying a master’s in innovation design jointly-run by Imperial College London and the Royal College of Art, came up with the idea for Petit Pli.

“We create clothes that grow with your child,” he says.

“What we want to do is clothe the future of humanity and we’ve started with the next generation.”

Before moving into innovation and design, Yasin studied aeronautical engineering at Imperial College London due to his love for the way “man could conquer the air” through the aeroplane.

Towards the end of his degree, he turned his focus towards deployable structures for nanosatilities, which required research into origami to look at how to fold as much material as possible into a tight space.

Taking the skills he had learnt on this course, Yasin moved into innovating in an industry closer to home: Fashion.

He says: “I found the industry fascinating because of the psychological effects you can have with people, as when people put on clothes they can get a huge boost in confidence, with it also able to bring communities together.

“Essentially I realised how the world of fashion wasn’t necessarily as superficial as it may seem on the surface and it can delve way deeper if we could just capture that value and focus it into actually adding benefit to people’s lives.

“My task was how can I balance sustainability and ethics with commercial viability and desirability.

“Failing any one of these three would mean a product which wouldn’t succeed as a product offering or as a business, so my goal there was to create something that would balance all of those three.”

Yasin’s moment of inspiration to achieve these three objectives came when buying clothes for his newly born nephew.

He says: “I bought a garment and sent it to him, but by the time he had received it, he had already outgrown it, and this was definitely signal to move into this sector.”

He presented the concept, among several other ideas, to the general public, with the child clothing innovation idea receiving popular feedback.

With this positive reception, Yasin got to work developing a prototype.

How does Petit Pli work?

Drawing inspiration from his engineering background in developing deployable satellites, he created what he calls “deployable clothing”.

The way the clothes are developed is based around an engineering principle which sees a product grow along its length and width, with the item designed from the outset to be based around this idea.

Yasin finished his first prototype right at the end of 2016, with the product cooking in the oven as the New Year fireworks were setting off.

Since then, Petit Pli’s design has become more sustainable and ethical.

To produce the clothes, the firm now uses materials made from recycled plastic water bottles and is developed into a monofibre construction, allowing the final product to be easily recycled.

Yasin says: “This progress comes from the core principles of user-centred and human-centred design, working with people that actually use the product, giving it to parents and getting them to test it.

“We ran a beta launch last summer where we manufactured and sold 100 sets of garments through our mailing list, completely selling out within a weekend.

“We call the people we sold to our pioneers, all in different climates, with different cultural backgrounds giving different perspectives and different insights on the same piece of clothing.

“We’ve been using this pool of people to really further our understanding of what the current product is.”

From Coco Chanel to Ralph Lauren and Gianni Versace, fashion, more than most industries, is dominated by the lead designers at the top.

Yasin believes, with the proliferation of more wearable technology that addresses the everyday needs of the consumer, significance will be placed less on the developer at the top and more about the team producing the garment.

He says: “As things get more complex you need big teams behind that, so it will no longer be about just this one name, but about the design, engineering, innovation and fashion team that are coming up with really complex solutions to complex problems.