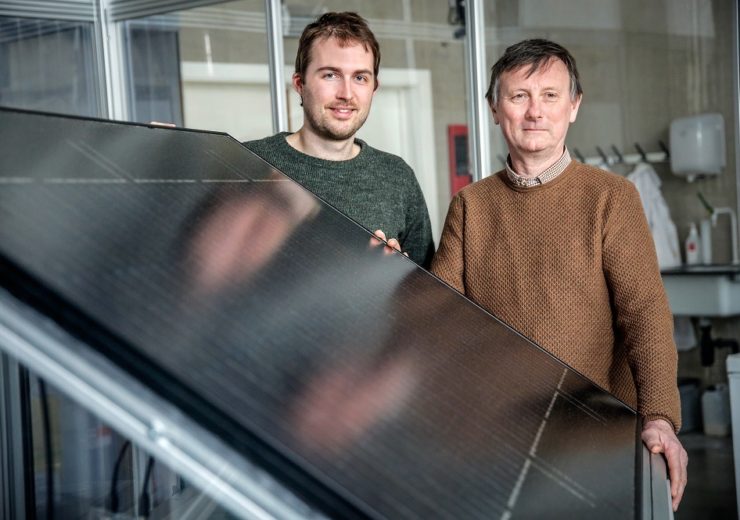 Belgian university researchers have come up with a new hybrid solar cell solution that produces hydrogen gas to power and heat homes.

Only 20 of the eco-friendly panels, developed by Professor Johan Martens and Tom Bosserez from the Centre for Surface Chemistry and Catalysis at KU Leuven university, are needed to power and heat a family home through winter.

The hybrid solar cell works by using sunlight to convert moisture in the air into hydrogen gas.

The gas can then be used to create electricity or heat and doesn’t produce any greenhouse gases or pollution.

How does the hybrid solar cell work?

The new solar panel innovation beats the record for the most efficient means of making hydrogen fuel.

Speaking to the KU Leuven university blog, Mr Bosserez said: “Our system converts sunlight and water vapour from the air directly into hydrogen gas, with an efficiency of 15%.

“In Belgian weather conditions, our panel can produce an average of 250 litres per day on an annual basis.

“To give you an idea, 20 of these panels could heat and supply electricity for a well-insulated house with a heat pump all winter long.

“If you also install a solar thermal collector and traditional solar panels, you have enough to get through the year.”

The technology is yet to be patented and presents a new way to create affordable and environmentally-friendly fuel from water vapour.

Prof Martens added: “Our starting point was simple: how can we produce fuel any time and anywhere?

“That question led us straight to the most logical answer: air, and especially the moisture it contains.

“Even desert air has enough water vapour in it, so you can apply this process anywhere.

“Water vapour is the fourth gas in the air after oxygen, nitrogen and argon, so if you find a way to catch that, you have more than enough water to split.”

Hydrogen gas as a renewable source of energy

Unlike natural gas, when pure hydrogen is combined with oxygen and burned it produces no harmful CO2 emissions – only heat and water – and produces no nitrogen oxides or particulate emissions when used in transport to power electric fuel cell vehicles.

The UK’s independent advisory body Committee on Climate Change claims hydrogen is a credible option to help decarbonise the UK energy system and has the potential to replace natural gas.

Prof Martens said: “Hydrogen gas can play an important role in the transition to a carbon-neutral society.

“It’s a chemical way to reach that goal, if you will.

“Our system produces hydrogen gas in a carbon-neutral way – we take water vapour out of the air, use it to produce energy, and at the end of the cycle, it’s water vapour again.”

One of the advantages that hydrogen gas has over other renewable energy sources, such as solar and wind, is that it is easy to store and transport without the need for batteries.

It can also be combined with natural gas as energy suppliers transition to a carbon neutral option.

This means that hydrogen gas has been tabled as a renewable energy solution for the shipping industry.

Prototypes of the hydrogen producing solar cells will now be tested outside of the KU Leuven university campus, ahead of possible commercial production.