Last month, three companies submitted plans for HS4Air - a £10bn high-speed rail line connecting HS1 with HS2, as well as linking up with the Heathrow and Gatwick airports. Felix Todd finds out who the firms are 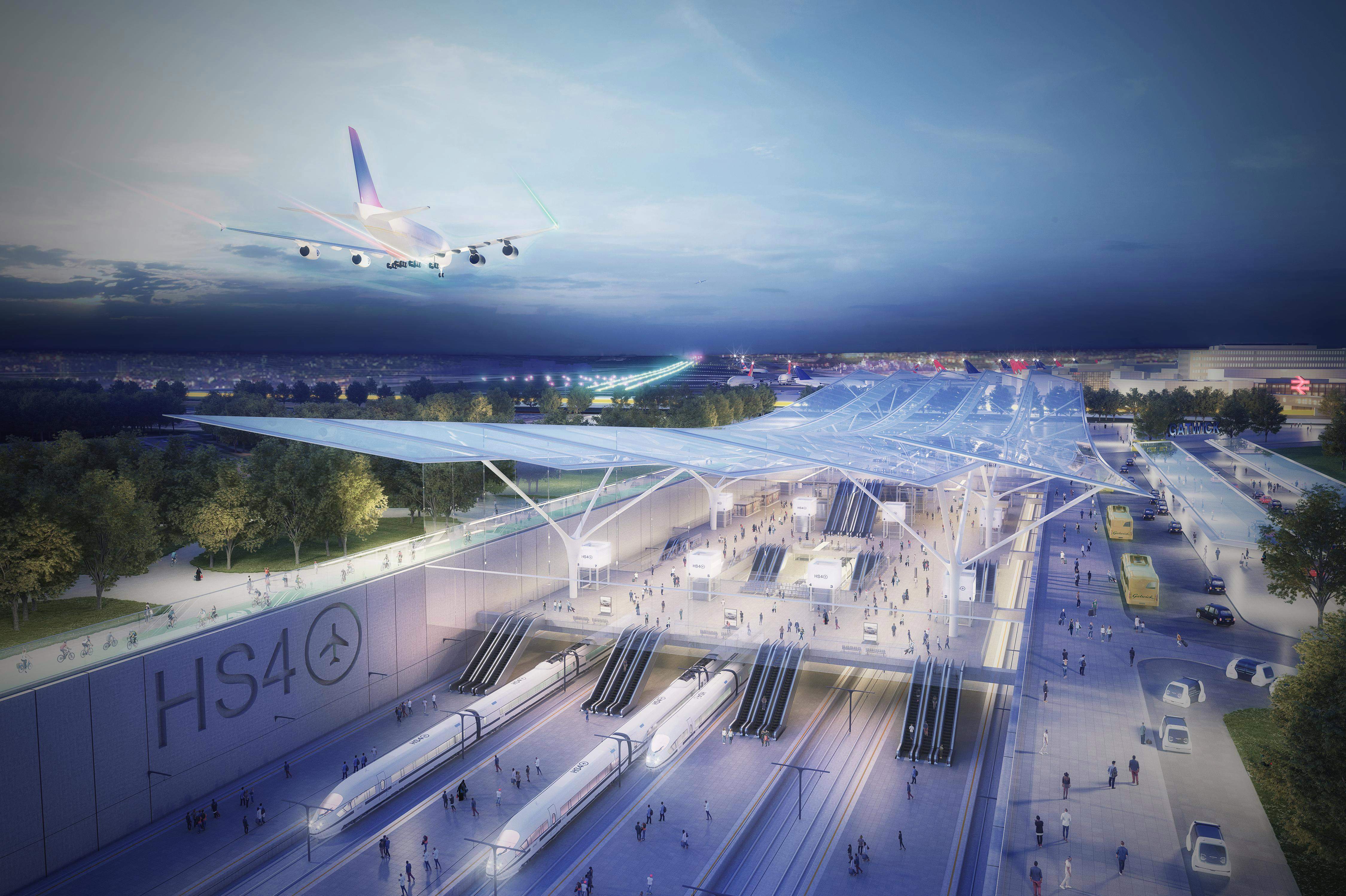 Britain’s high-speed rail network is set to expand in the coming years as construction on HS2 and HS3 gets underway – but a collective of three companies has already submitted plans for HS4Air.

The £10bn vision was submitted to the Department for Transport (DfT) following its open “call for ideas” earlier this year and involves a new 140km railway that will connect HS1 – the Channel Tunnel rail link – in the country’s south-east region with HS2 north-west of London, as well as provide links to and between Heathrow and Gatwick.

London-base consultancy Expedition Engineering, architect Weston Williamson + Partners (WW+P) and planning consultancy Turley are behind the plans, which are due for feedback in autumn this year.

In what would be a bold move to dramatically enhance the UK’s regional connectivity – as well as its link with continental Europe – representatives from the joint enterprise have emphasised the need for project to go ahead.

Urban architecture and infrastructure specialist WW+P is currently working on the HS2 project, which has placed it in a good position to pitch the idea for HS4Air.

Its broad portfolio includes the Seoul Yeoui-Naru Ferry Terminal, in which WW+P created a landmark meeting point on the edge of the South Korean capital’s Han River that doubled up as a ferry terminal for the popular waterway.

The company was also awarded first prize in an open international architecture competition to design a 125,000 sq m Science City in Giza, Egypt, in 2016.

With roughly 115 employees in London, in addition to 15 in Melbourne and 14 in Sydney, the company is currently working on infrastructure projects all over the world ranging from sewer construction to airport expansion.

Speaking to Compelo, associate partner Nick McGough shared his thoughts on the HS4Air proposal and his company’s belief in the value of sophisticated infrastructure.

“As far as HS4Air is concerned – it seems bonkers that we are building a second high-speed line and not connecting it to the first.

“WW+P and our collaborators felt we could turn this into a solution.

“You should be able to go from Manchester to London and then on to Brussels – we are actually really behind the rest of the world in terms of this kind of connectivity so it’s great that it’s all happening.

“We believe that city infrastructure is critical to helping urban areas grow sustainably and effectively – more than half the world lives in urban areas now so it’s really important.

“In an ideal world we’d like this project to be funded at zero expense to the taxpayer.

“We submitted our idea to the DfT last month and it will feedback at the end of October.”

WW+P on its other infrastructure work

“Particularly in the western world, there’s a really car-centric attitude, so we are really focusing our work on solving that.

“In Australia, for example, it has been car-focused for a long time but now it’s investing in rail – and we are involved in the extension of the Australian metro system at the moment.

“We are also heavily involved in the master plan to expand Toronto Pearson International Airport in order to meet the growing population and increasing air travel demand.

“We’re also working on the Thames Tideway – which seeks to ‘reconnect London with the River Thames’ – mainly around ventilation.

“It’s not very glamorous – essentially we’re helping build a huge sewer – but it’s necessary for cultural hubs like the Southbank to be made possible.

“We have also been working on HS2 on the hybrid build work. We’re currently working on HS2 Phase 2a as well as the East Midlands hub station project.”

It has worked on projects like the London Cable Car in 2012, which provides pedestrian and cycle access across the river on a five-minute journey that rises to a height of over 90 metres above the Thames, with views of Canary Wharf, as well as the City to the west, the Olympic Park to the north and the Thames Estuary to the east.

The company also carried out a strategic review of the existing surface water and foul drainage infrastructures serving Heathrow Airport, the replacement of which was a £200m process.

Currently, Expedition Engineering is involved in the HS2 project, specifically working on the Euston and Old Oak Common stations, acting as part of a consultant team led by engineering firm WSP.

Director Alistair Lenczner told Compelo about the plans for HS4Air and why the project is sorely needed in the UK.

“The project is a concerted effort to improve the county’s connectivity – we believe people should be able to travel from continental Europe, into the UK, wherever they need to go outside of London without having to change in the capital.

“France, Holland, Brussels – all these places have great connectivity – the UK is actually really far behind these places and needs to pick up the pace in a way that it hasn’t for the past three or four decades.

“No real attempt has been made to improve on the Victorian-era model of London-first, and the country’s regions have suffered as a result.

“It’s a timely project with both Heathrow and Gatwick planning to expand.

“With that comes increased passenger capacity and extra stress on getting those passengers into the airports.

“At the moment, passengers who don’t need to be in the capital are having to come through it in order to get to these airports or to change on their way back from Europe.

“With connections outside London, the congestion inside the city will be reduced and people will have a smoother, less stressful journey wherever they are going.

“We really see HS4Air as a step change in this regard, and for getting people out of cars and into trains which will be beneficial for the environment.

“Ultimately, we would like to see the rail network servicing more than just the South East of the UK.

“We want to help passengers get to wherever they want to go in the UK without having to get off the train.”

Independent planning and development consultancy Turley is the third of the HS4Air companies behind the proposal.

In 2017 alone, it promoted and secured permissions for 180,000 homes and 6.5 million sq m of commercial floor space, in addition to working on various projects ranging from film studios, sports stadia, airport expansion and port redevelopment.

It is currently involved with the ongoing expansion of Pinewood Studios on the western edge of London, which is estimated to protect and create around 3,100 jobs and bring £400m to the economy while staging big-name productions like Star Wars and James Bond.

The company also worked on the redevelopment of the Liverpool waterfront Wirral Waters, a £4.5bn project in which it assembled and led a team of architects, transport specialists, environmentalists and more to develop a planning strategy.

Turley has not yet responded to a request for comment on the HS4Air proposal.