Wearing high heels to work could damage your health 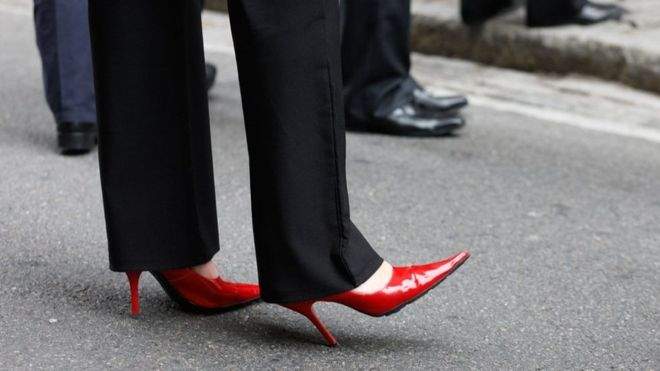 Wearing high heels may cause working women musculoskeletal pain as well as having cultural and psychosexual affects. Equal opportunities campaigners say employers should be brought to heel.

High heels have for decades been the footwear of choice for power-dressing businesswomen – often at the expense of comfort.

Now, new research has found that companies that force female employees to wear heels may also be damaging their health.

Published in the journal BMC Public Health, the report looked into the physical damage wearing high heels can do. In addition, it looked for the first time at the cultural and social effects of wearing them.

Researchers at Aberdeen University found that wearing high heels can affect the body from “the spine to the toes”. Heels are associated with musculoskeletal pain, hypersensitivity vasculitis (HV) and first-party injury “including to children”.

Furthermore, the team found a number of studies suggesting that wearing high heels increases a woman’s attractiveness to men. This “poses a potential opportunity or a dilemma” as it could come with benefits.

“From our review, it is clear that despite the huge amount of evidence showing heels are bad for individuals’ health, there are complex social and cultural reasons that make high heel wearing attractive,” said research lead Dr Max Barnish.

The authors said it is important to respect women’s footwear choices and that they are not pressurised into wearing high heels against their will.

“We feel the UK government should follow the lead of other authorities who have introduced specific laws to tackle this practice rather than simply relying on existing legislation which has left the situation in this country uncertain and open to misinterpretation,” Dr Barnish said.

The high heels debate made national headlines in 2016. Receptionist Nicola Thorp refused to adhere to consultancy PwC’s uniform of wearing heels as she said they would hurt her feet. She was sent home from her temping job as a result.

Ms Thorp then launched a campaign to make it illegal for companies to require women to wear heels at work. However, the government rejected a change in the law.

“I think dress codes should reflect society and I don’t think that this particular loophole in the dress code policy does reflect modern society,” Ms Thorp told BBC News.

In April, the Canadian province of British Columbia made it illegal to require women to wear heels in the workplace.

Dr Heather Morgan, a lecturer at the University of Aberdeen, said employer should take note of the health risks.

“Of course we are not trying to tell anyone that they should or shouldn’t wear high heels,” she said.

“But we hope this review will inform wearers to help them weigh up the health risks with social benefits, as well as putting pressure on law makers to toughen up legislation so that no one is forced against their will to wear them in the workplace or in licensed public social venues.”