G7 summit: Seven things to expect from the global leaders’ meeting in Canada

The G7 summit in Quebec this week arrives at a time of frosty relations between the United States and fellow members of the powerful union after Donald Trump imposed trade tariffs on the European Union and Canada - while other topics on the agenda include nuclear weapons, climate change and artificial intelligence 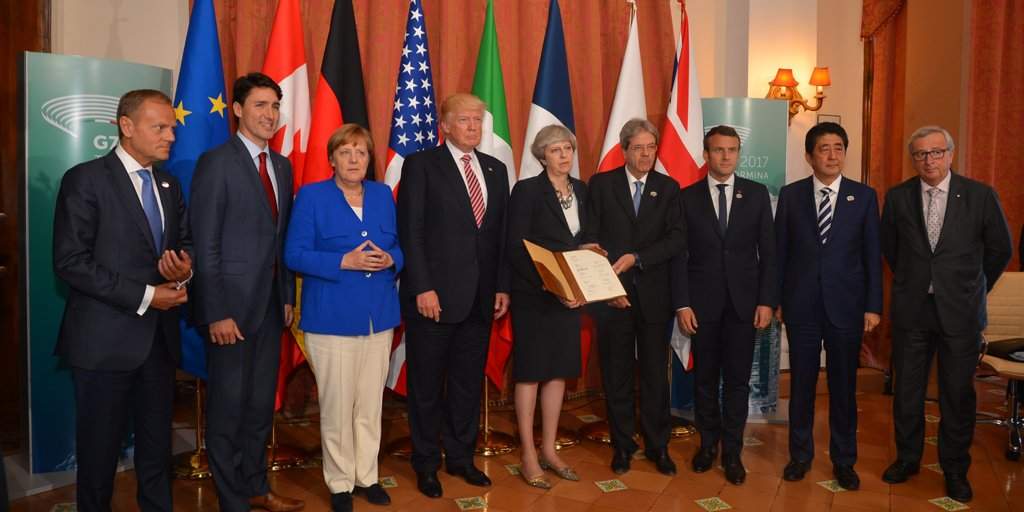 G7 leaders, including US President Donald Trump and UK Prime Minister Theresa May in the centre, pictured signing the G7 Taormina statement on the fight against terrorism and violent extremism in Sicily in May 2017 (Twitter/G7 Canada)

Leaders from seven of the world’s largest economies and their rafters of staffers will be swanning around the five-star Le Manoir Richelieu hotel in Quebec this week for the G7 summit in Canada.

Representatives from Canada, France, Germany, Italy, Japan, the United Kingdom and United States will be joined by EU Commission president Jean Claude Juncker and European Council President Donald Tusk for what pundits expect will be a tense two-day meeting.

Holding the presidency of the G7, Canada has had the pick of topics to discuss at the meeting of minds taking place on Friday and Saturday.

But there are also plans to discuss issues facing the major Western economies that are not forever in the foreground.

Here are seven things we can expect from the G7 summit this week:

An exchange of words over trade tariffs

Talk between the United States and its allies has been focused on threats of tit-for-tat trade tariffs leading up to the G7 summit.

President Donald Trump got the ball rolling by subjecting Canada and the EU bloc to 25% tariffs on steel imports and 10% tariffs on aluminium – refusing to keep up tariff exemptions they enjoyed until 1 June.

Annoyed that it has been caught in the crossfire of the US’ battle with China, the European Union has released its own list of American products that could be subject to import tariffs from 20 June.

Levi’s jeans, Harley Davidson motorbikes, bourbon and peanut butter are just some of the names on the EU’s hit list.

A barbed press release from the G7 followed a meeting of the group’s finance ministers and central bank governors on 2 June.

The statement said the US sanctions on metals would “undermine business and investor confidence” after brief niceties about co-operation.

Canadian finance minister Bill Morneau said: “The results of our discussions are proof the G7 can bring progress on important issues to our citizens and help grow our economies for the benefit of everyone.

“But this progress is only possible when we work together. Unfortunately, the actions of the United States this week risk undermining the very values that traditionally have bound us together.”

On the same day, Trump tweeted: “The United States must, at long last, be treated fairly on trade.

“If we charge a country ZERO to sell their goods, and they charge us 25, 50 or even 100 per cent to sell ours, it is UNFAIR and can no longer be tolerated. That is not free or fair trade, it is stupid trade!”

It will be interesting to see what happens if he brings this attitude to Le Manoir Richelieu.

A brief thaw in British-EU relations

There is a chance that, if only for a couple of days, Britain and the rest of the EU will put aside frictions over their future relationship and face down the United States as a unit.

Prime Minister Theresa May chastised Trump over-the-phone this week, dubbing his tariffs “unjustified” in a show of strength.

Downing Street also ratified that she would not be after a bespoke UK exemption from the sanctions, and would work within the EU bloc.

But it’s not unthinkable that a cabinet Brexiteer will throw a spanner in the works.

International trade secretary Liam Fox has already expressed hope that the UK will get an exemption on leaving the EU.

Not content with simply shaking up trade relations, Trump decided to remove his country from the Iran nuclear agreement last month.

Three G7 peers who signed the pact – France, Germany and the UK – were frustrated by Trump’s decision to re-impose sanctions on Iran and will not be feeling any better in light of news that the country plans to further enrich uranium should the deal implode.

There’s also a good chance that the summit will be overshadowed by the commander in chief’s scheduled meeting with North Korea leader Kim Jong-un in Singapore next Tuesday.

No doubt other leaders at the G7 will be pleading with Trump to keep a level head and ease the North Korean dictator to further disarmament.

One of the key themes laid out by Prime Minister Trudeau ahead of the G7 summit is economic investment.

The decision is an interesting one coming off the back of the OECD economic outlook report presented last week, which warned that investment in skills would have to improve if the world’s biggest economies were to remain stable in the mid-to-long term.

Gender equality and women’s empowerment is also high on the agenda, so the burning issue of closing the gender pay gap is bound to raise its head when economic investment is on the table.

The Paris agreement set a target for signatories to reduce the decrease of global temperature from 2% to 1.5% – the “pre-industrial level”.

On taking the United States out of the international pact, which has been backed by every other country in the world, Trump said: “As President, I have one obligation, and that obligation is to the American people.

“The Paris Accord would undermine our economy, hamstring our workers, weaken our sovereignty, impose unacceptable legal risks, and put us at a permanent disadvantage to the other countries of the world.”

With mounting pressure from institutional investors urging major economies to scrap fossil fuel subsidies – and Trudeau looking to position Canada as a climate change leader – there’s a good chance the neighbours will be at loggerheads on the environment.

“Preparing for jobs of the future” is listed among the key themes of the G7 summit – illustrated by a wired brain.

The potential impact of artificial intelligence (AI) on the jobs market will be a big concern for those on the left and right worried about mass unemployment.

The matter has already been discussed by G7 employment ministers at a meeting in March.

In a statement, innovation ministers said: “Realising the broad potential of AI technologies will require thoughtful investments in entrepreneurialism, education and the labour market to promote relevant skills and knowledge to participate in jobs of the future – and to adapt to changes in demand for skills.”

This would seem to indicate that ministers want to re-skill workers, rather than putting mental blocks on AI.

Whether the new, populist Italian Prime Minister Giuseppe Conte and Trump shares this vision of the future could become clear this weekend.

A lot of chatter about the American First Lady

Early coverage in the lead up to the G7 summit has centered on the news that the First Lady Melania Trump will not be travelling with her husband to Canada – or the North Korea talks in Singapore.

News of her absence from the Trump world tour followed a three-week stint out of the public eye.

Speculation about the health of their marriage is bound to pop up at any press conference with the leaders if there are any tabloid hacks in the room.