What’s it like to be driven in a driverless car?

As driverless car technology becomes more sophisticated, companies are getting closer to developing a truly driverless experience. Compelo reporter Sam Forsdick took a ride in a driverless car at the GTC Europe event to see whether the autonomous technology could beat a human driver. 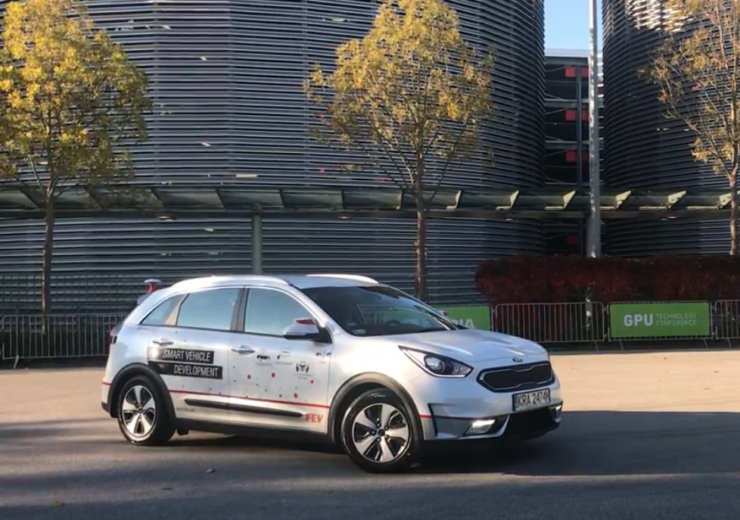 Investment in autonomous vehicles is skyrocketing as companies compete to be the first to develop the driverless car technology.

A report by the Brooklings Institute found that the total cost of investment and acquisitions between August 2014 and June 2017 topped $80m (£61m).

At GTC Europe Compelo was given the opportunity to try out one of the early prototypes on a test track outside the Munich conference centre to see whether all the investment has been worth it.

What technology was powering the driverless car?

This particular driverless car used a KIA and had been developed by FEV’s Polish team, based in Liszki, which has been working on improving its fleet of smart vehicles since 2016.

It uses eight surround view cameras to give the car a 360 degree view and two forward facing cameras for object detection.

It was directed by two internal navigation systems, a GPS and an IMU – an accelerometer typically used to manoeuvre aircraft.

Radar and lidar, which uses lasers to determine the distance between objects, rounded out the sensor units on the car.

The brains of the car were located in the boot, where an industrial PC and NVIDIA PX2 Platform analysed the images being received from the car’s sensors and determined whether to break or turn the vehicle.

Although the car still had a driver’s wheel and peddles, they were controlled by the cars autonomous driving system rather than the person sat in the driver’s seat.

What was it like to be driven in the driverless car?

Current driverless technology is in the early stages with many companies, such as Volvo, estimating that autonomous cars will not reach consumers until 2021.

Experiencing the driverless features felt like a taste of the future – albeit a limited one.

The test run was restricted to a short run of track with one corner to navigate and a car at the end to demonstrate the car’s object detection and breaking systems.

Although the steering occasionally juddered, it was able to turn the corner accurately and without assistance from the driver.

All-in-all the short journey was very uneventful – the car drove smoothly and stopped in time to let the passengers out.

For someone who was not aware of the fact the car was using a driverless system it would be very difficult to tell the difference between it and a human driver – which is a testament to the technology.

It still has a long way to go before it is capable of taking a passenger wherever they want, however as a short demonstration it was an effective proof of concept.