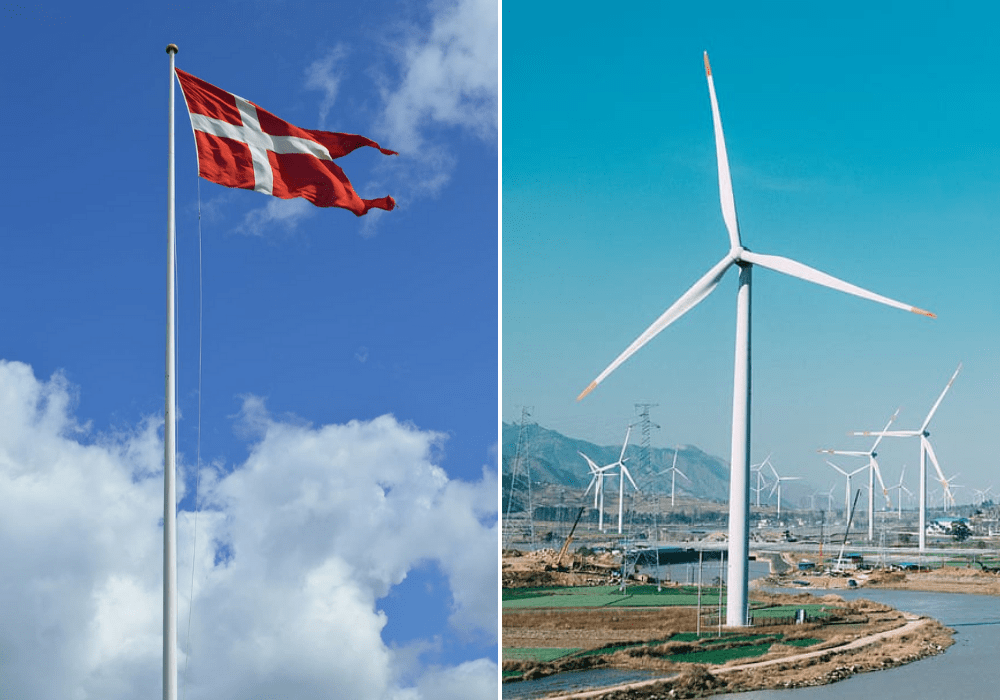 Denmark has 5.7GW of wind capacity across the country (Credit: Piqsels/pxfuel)

Many countries have a net-zero target by 2050 but Denmark is going one further with an ambitious goal to remove fossil fuels from all electricity generation in a decade’s time – with wind power playing a central role. James Murray reports.

When Danish science teacher Poul la Cour began inventing turbine technology in the late 19th century in the small village of Askov, 3km north of the former Prussia and German border, little did he know that his research would pave the way for future generations.

Despite the scientist’s integral role in bringing electricity to rural Denmark, the country continued to rely on importing coal like many other nations across the world.

It wasn’t until the oil crisis of the 1970s that the Nordic country began to diversify its energy production, with talk of wind power resurfacing once again.

Then in 1991, a century on from La Cour’s work, Denmark became the first nation to build an offshore wind farm – and the industry has grown considerably since then.

Figures released last week by Danish state-run utility company Energinet showed that 47% of the country’s energy was generated from wind power alone in 2019. It’s just the start of a vision to make its electricity sector fossil fuel-free by 2030.

Peter Jorgensen, Energinet’s vice president of associated activities, remembers a time when his country thought it could produce a maximum of 5% of its electricity from wind power, but he believes government plans and its geography have been key to the success.

“One of the reasons Denmark is a good place for the wind industry is our ambitious government and the commitment from it that this is the road for the country – towards a fossil fuel-free society using wind energy,” adds Jorgensen.

“The second is the physical opportunities for Denmark created by the location, as we have a very large wind resource in the North Sea.”

Why Denmark can produce lots of electricity through wind power

It is no surprise that Denmark’s location plays a pivotal role in its production of onshore and offshore wind, given that it experiences strong winds coming from the North Sea and the Baltic Sea.

Denmark installed its first onshore wind turbine in 1977 and, according to the Danish Energy Agency, a capacity of 326 megawatts (MW) generated 0.57 terawatt-hours (TWh) in 1990.

The following year, the first offshore wind farm went live and the numbers have steadily jumped up each year, reaching 2,390MW installed capacity and 4.22TWh generation in 2000.

In 2019, Denmark’s capacity passed the 6GW mark and generated 16TWh – a 15% increase on the previous year’s production – according to Wind Denmark.

Jorgensen says much of the growth has been due to the focus shifting more from onshore to offshore resources.

“Denmark is a small country and we have people living all over so it’s very hard to erect more wind turbines onshore,” he adds.

“But we have a vast offshore resource and this is the direction we’re going.

“There is more capacity currently onshore, but offshore will increase substantially and eventually overtake the resources on land.”

In the past year, Wind Denmark estimates that the settlement price for wind power dropped by 12.7% – from 30.3 Danish kroner per kilowatt-hour (kwH) to DKK26.5 per kwH.

Although these prices aren’t quite as low as between 2014 and 2017, Jorgensen says the cost for renewables like wind and solar in the country has generally decreased substantially over the past decade, with onshore wind the cheapest possible generation that can be installed in Denmark at this moment in time.

Although offshore is still a little more expensive, the cost of this technology has also decreased substantially in recent years.

The share of power from wind turbines at sea increased from 14% of Denmark’s total electricity generation in 2018 to 18% in 2019.

It now accounts for 38.3% of the country’s wind power generation.

Jorgensen says the past 12 months’ wind energy figures were boosted by the commissioning of the Horns Rev 3 wind farm in August, which is based off the Danish Jutland coast in the North Sea.

It has a capacity of 407 megawatts (MW) and has the potential to cover the annual electricity consumption of about 425,000 homes – roughly 20% of the households across the country.

The Danish government has set a target of being net-zero on greenhouse gas emissions by 2050, as part of a global strategy to clean up the world economy and combat climate change.

As the country has rapidly increased its developments in the wind industry, it has placed a higher emphasis on renewables to help transition away from high-polluting fossil fuels.

The target for 2020 is that 50% of the country’s power will be produced by wind energy, with a plan to completely decarbonise the electricity sector and rid it of fossil fuels by 2030.

In summer last year, the Danish parliament agreed on a proposal to reduce CO2 emissions by 70% by 2030 compared with 1990 levels, which Jorgensen says has “really set the bar higher for our transition” in the next 10 years.

Greenpeace Denmark’s climate and energy advisor Tarjei Haaland believes 2019’s wind energy figures are “undoubtedly an important milestone” after many years of investments and development in the sector.

“It is also noteworthy that the share of biomass and coal in Denmark’s electricity production decreased over the past year,” he adds.

“With the current pace of expansion of wind energy and renewables, Denmark’s electricity sector seems to be on track to become fossil-free by 2030.

“Though, it is problematic that biomass, which is not fully CO2 neutral, is set to be a part of the electricity mix in 2030.

“We encourage the government and political parties to work on a full and more rapid phase-out of coal and biomass, both in the electricity and heat sectors.”

Last year’s wind energy figures were a world record for Denmark, with almost half of the country’s energy coming from wind.

Its biggest rival prior to that in 2018 was Ireland, which produced 28% of its energy from the renewable source, compared to Denmark’s 41% that same year.

Jorgensen says the challenges in Ireland are much harder than in the Nordic country because of fewer opportunities due to location.

“We are part of the European electricity market, which has strong interconnectors with our neighbouring countries,” he adds.

“This means we can have an intensive trade import and export, and thereby digitise and balance the variable generation in a much larger geographical area.

“Whereas Ireland is an island and has limited exchange capacity to its neighbouring areas, so it has to do a lot more balancing and ensuring security in the system on the island alone.”

The leading nation in terms of installed capacity is China with over 220 gigawatts (GW) in 2018, which is much more than Denmark’s 5.7GW from that same year – but wind power only made up 3.3% of China’s electricity generation two years ago, with coal still ruling at near 60%.

Next steps for Denmark to reduce fossil fuels in electricity mix

With Denmark focused on reducing fossil fuels, it is working on new, improved methods and Jorgensen believes it will require “much more flexibility”.

One of the areas it is looking into is electrolysis, where excess electricity is used to produce hydrogen.

The chemical element is regarded as a credible power source to aid the decarbonisation of an energy system – with a particular use case earmarked in transport, where hydrogen buses, cars and even trains could come into operation.

According to the US-based non-profit Hydrogen Energy Center, a major advantage of using hydrogen as an energy carrier is that when combined with oxygen, its only by-products are water and heat.

Jorgensen says another area that is being explored is adding the odourless gas nitrogen with hydrogen to create the compound gas ammonia, which Denmark believes has “big potential for merchant shipping in the future”.

He adds: “For the enormous capacities in the North Sea, we can turn the excess electricity into green electrons and green molecules – and then turn them into substitutes for fossil fuels in all other parts of the energy system.”

Wind Denmark’s CEO Jan Hylleberg believes the 2020s will be the decade when the country will “really start to put the green power into use in our heating and transport, and not least for the production of green fuels such as hydrogen and ammonia”.

Jorgensen says there will be more investment in solar in Denmark in the coming years, but that the climate isn’t entirely beneficial for this type of energy so it is important to have other sources available for when solar is unavailable.

Which upcoming projects does Denmark have to expand its wind power capacity?

In order to ramp up the country’s wind capacity, there are four projects in place across the next 10 years, as Denmark aims to make its electricity sector free of fossil fuels.

The 600MW Kriegers Flak wind farm development, based in the Baltic Sea, will be commissioned in 2021 and be connected to the Danish and German electricity grid.

Alongside this, three further offshore wind farms were agreed by the Danish government in 2018 to be built by 2030.

The first is the 800MW wind farm Thor, which is aptly named after the Nordic god of thunder, with the other two projects still in the planning stages.

Jorgensen says previously these types of projects required a lot of subsidies but now very limited government funding is necessary to get the farms up and running, with private companies providing most of the investment.

Another interesting project announced in December 2019 was a plan to build artificial islands in the North Sea that would be surrounded by offshore wind turbines with a capacity of 10GW.

The largely privately-funded development, which would cost between DKK200bn and DKK300bn ($29.8bn to $44.7bn), could supply up to 10 million households.

Unveiling the project, climate and energy minister Dan Jorgensen said: “If we are to realise the the enormous potential of offshore wind, new technologies will have to be developed to convert green power into fuel for aircraft, ships and industry.

“Our task is now to make the necessary possible. With the target enshrined in a legally-binding climate act, we hope Denmark can inspire other countries to follow suit.”