Coal mining in the UK has been in heavy decline since it peaked in the 1980s - and while there aren't many collieries remaining, a handful of new sites have been proposed 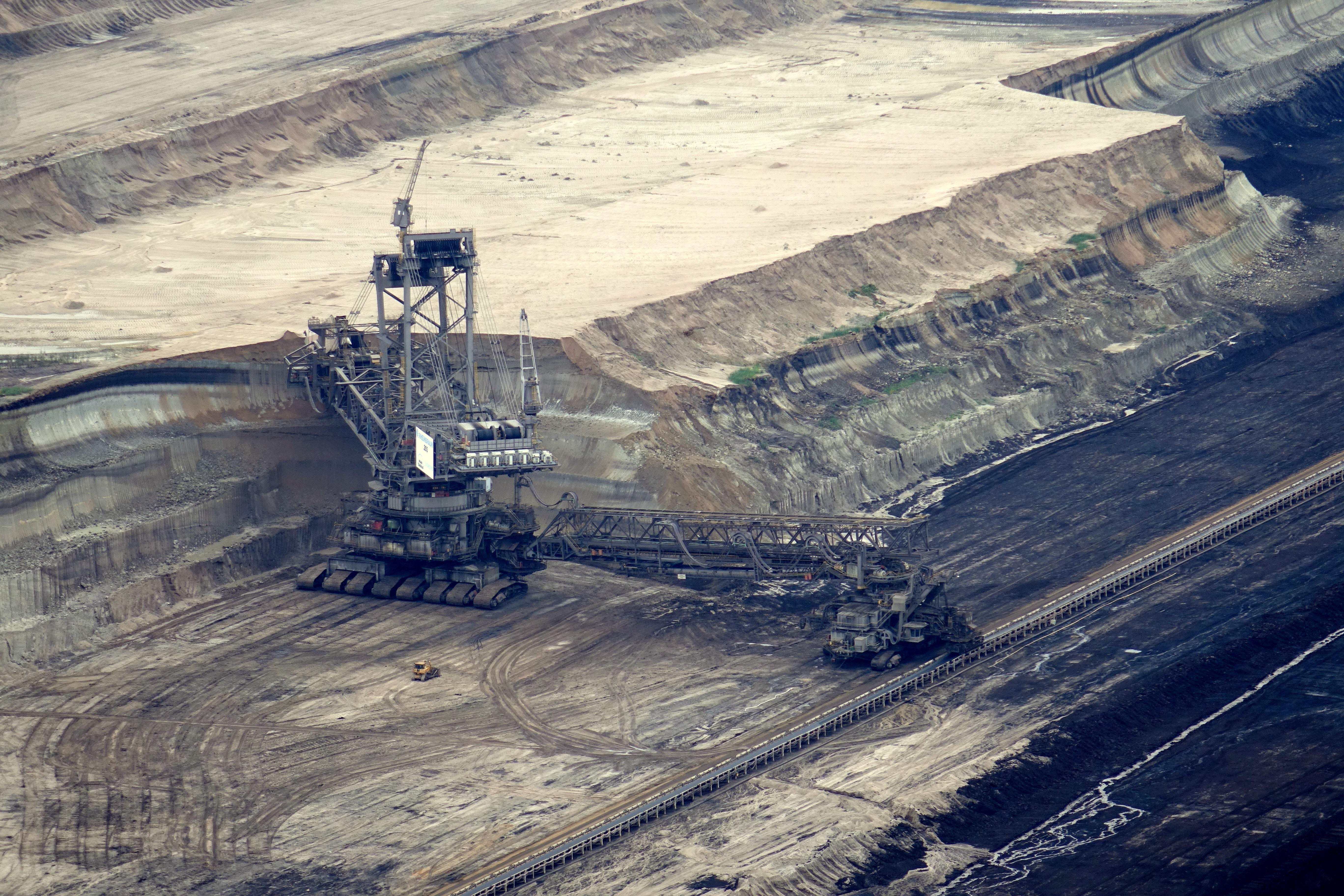 For decades, coal mining in the UK was the backbone of the economy and stimulated regions including the North of England, Midlands, Wales and Scotland by employing hundreds of thousands of people.

But the closure of collieries from the 1970s onwards meant the industry collapsed, with figures by Statista showing the number of people employed in mining fell from one million in 1920 to 2,000 in 2015.

Britain’s last deep coal mine, North Yorkshire’s Kellingley Colliery, closed in December 2015 and the industry’s future looks all but over as the government ramps up plans for all coal-fired power stations to shut down by 2025.

But amid the dying gasps of the industry are a series of attempts to open new surface mines, which would add to more than a dozen still in operation.

And even though no deep coal mine has been opened since the 1980s, plans were approved by Cumbria County Council on 19 March, 2019, for the Woodhouse Colliery site, in West Cumbria.

What is an open-cast mine?

Open-cast mines use a slightly different process to underground mining, which was more commonplace in the 20th century.

Surface mining doesn’t require the employees to work and live on mining camps for a long time, which is what’s expected when working underground.

It also involves taking minerals from the surface of the ground rather than the passages dug under it, making it a less hazardous working environment too.

Despite the transition towards renewable energy, coal remains a useful natural resource that is utilised in manufacturing, domestic heat generation, food and beverage production, chemicals production and electricity generation.

According to the Department for Business, Energy and Industrial Strategy, 14.5 million tonnes of coal was needed to satisfy demand in electricity generation in 2017.

Here’s a list of some of the open-cast mines that are active in the UK and the companies that operate them – plus those that are seeking permission to open new sites.

Coal mining in the UK: Locations of existing opencast mine sites

Selar is one of Celtic Energy’s coal sites situated in the small town of Glynneath in South Wales.

The 330-hectare site, of which 180 hectares is at the core of operations, employs 100 people, including 70 directly and 30 sub-contractors.

East Pit is one of the three sites owned by Celtic Energy.

It has been in operation since 2005 and covers an area of about 400 hectares, but only 80 hectares is used for coal mining.

Once the coal has been extracted it is transferred by road and rail to the Celtic Energy’s own processing and distribution centre at Onllwyn.

Nant Helen coal mine, based in the village of Coelbren, is one of Celtic Energy’s largest operational sites and has about three million tonnes of coal reserves.

It was first granted permission in 1998 and by 2016, supported just over 100 employees, but a fall in demand saw the pit mothballed later in the same year.

However, the company was given permission in March 2019 to restart mining, with owners Celtic Energy estimating the mine has recoverable reserves of more than three million tonnes (Mt).

Using about 85 loaded lorries per day, the Brenkley Lane surface mine lies just north of Newcastle.

Banks Group started extracting coal from the site in 2010 and covers 244 hectares of land.

The site is programmed for a 2021 completion.

Banks is in the process of deploying drone technology to help its surface mines in the region run more securely and efficiently.

Using specialist software, the drone can turn the information it collects into detailed visualisations of the site.

This can be used to notify the way in which tasks are deliberated and approved.

The Shotton surface mine has provided more than just fuel, helping in the creation of a huge public art installation.

Banks Group built Northumberlandia as part of the restoration of land adjacent to the mine, with landowner the Blagdon Estate donating an extra piece of land for the spectacle.

The artwork is also known as “The Lady of the North”, standing at 112ft high at her tallest point, while she is 1,300ft long.

It is made up of 1.5 million tonnes of rock, soil, stone and clay – material that was taken from the mine.

Princess Anne opened the site, which sits in the 19-hectare Northumberlandia Landform Park, in September 2012 and it attracts about 100,000 visitors per year.

Banks has extracted coal from the Shotton mine since 2008.

It employs about 120 people, with up to 190 coal wagon movements on site each day, and claims to boost the economy through supplier spend and staff wages by about £15m every year.

Although originally due to end in 2016, its website says it is due to end on-site coal production in February 2020, with restoration completed by autumn 2022.

Another site belonging to Banks Group is the Bradley mine, near Consett, in County Durham.

It is based on a 71.3 hectares site and employs 30 people, with a maximum of 32 loaded lorries per working day.

Banks expects to extract about 500,000 tonnes of coal with coaling planned to end in 2021.

The Rusha coal mine by Banks Group began extracting coal from the site in 2012.

It had planned to extract about 1.5 million tonnes of coal over its 154 hectares.

The site had 150 employees and traffic movements of up to 63 coal wagons a day.

Restoration of the site has now commenced.

Situated in Ayrshire the Greenburn surface coal mine opened in 2004, producing 750,000 tonnes of coal and 68,000 tonnes of fireclay per year.

It employed more than 200 people, with 89% said to have been living within a 15-mile radius of the mine.

Coaling has now finished at Greenburn surface coal mine, with proposals under consideration for a wind farm and battery storage facility to be created at the restored site.

It has been responsible for operating the South Wales site since 2007.

It also supplies coal to the cement industry and various heritage railways around Wales and the UK.

Another £4m in wages is pumped into the local economy through spending on goods, services and wages within 10 miles of its Ffos-y-fran site.

The last coal is expected to be extracted in 2022, at which point restoration will take place.

But Merthyr (South Wales) Ltd was ordered by a judge in July 2017 to pay £5.6m towards the cost of restoring the land after a dispute with Merthyr Tydfil council.

NS Energy could find no public details about their mining operations.

Coal mining in the UK: Potential new locations for sites

Banks Group submitted plans for a mine in Highthorn, near Druridge Bay Country Park on the Northumberland coast, in October 2015.

It said the proposed 400-hectare site would bring “substantial investment” to the area by extracting up to three million tonnes of coal and creating at least 50 jobs over a five-year period.

This would boost the Northumberland economy by £87m and keep £200m within the UK economy by not importing the coal that would otherwise come from overseas suppliers, and make supply chain contracts worth £48m available to locally-based businesses.

Northumberland County Council initially approved the application in 2016 but the authority was later overruled by former Local Government Secretary Sajid Javid, who rejected it.

Banks then took the case to the High Court, which quashed Mr Javid’s decision in November 2018 over the legal reasons for the rejection.

The mine is currently awaiting a decision from Westminster.

Banks Group has had more luck in its plans for another North East coal mine.

Operations began at the Bradley open-cast mine in Pont Valley, near Consett, in July 2018 despite community opposition.

It has set up a £50,000 fund to use revenue from the mining operation for community projects in the surrounding area over the next two-and-a-half-year period.

West Cumbria Mining won planning permission from Cumbria County Council on 19 March, 2019, to open a mine in Whitehaven – but, unlike others on this list, this will be a deep mine.

It wants to use the £165m Woodhouse Colliery site to extract one billion tonnes of coking coal – about 2.5 million tonnes annually – from under the Irish Sea.

About 500 jobs will be created, with 80% of the workforce hired from within 20 miles of the site, and it will bring £200m of investment into the area, the company says.

It won backing from then-international trade secretary Dr Liam Fox and northern powerhouse minister Jake Berry, and could be operational from 2021.

A 60-acre solar farm that will provide 40% of the mine’s power needs will be built nearby.

In February 2020, campaign group Keep Cumbrian Coal in the Hole was granted permission for a judicial review of Cumbria County Council’s approval of the project.

Coal mining in the UK: View from industry and environmentalists

Environmentalists have long called on the UK government to show its commitment to ending coal mining in the UK by putting a stop to the opening of new open-cast coal mines.

Campaign groups such as Friends of the Earth, RSPW, WWF and others have also urged the government to block all developments for new projects.

In February 2018, Anne Harris, of the Coal Action Network said: “The 2015 Paris Agreement and the sharp decline in coal use this year indicate there is no long-term future for coal.

“If it fails to intervene in these projects, the government will allow local people’s health and ecology to be needlessly and permanently damaged, and risk its reputation as an international leader in ‘powering past coal’.”

But industry argues that coal demand remains high and domestically-produced supplies are needed as a result.

Banks Group, which operates many of the country’s open-cast mines, says that without producing its own coal, the UK would have to import more from countries such as Russia, the USA, Colombia and Australia – which produces more CO2 via its transportation than coal produced in the UK.

Community relations manager Jeannie Kielty, who is heavily involved in community work across Durham, Cumbria and Northumberland says she believes the industry has a place in Britain’s energy market.

Speaking during the ongoing row over the proposed Highthorn site in Northumberland in 2016, she said: “There is a market there for the coal in the medium term.

“We believe it makes much more sense to mine the coal and provide the investment and jobs in Northumberland and the North East than to send that money abroad.”