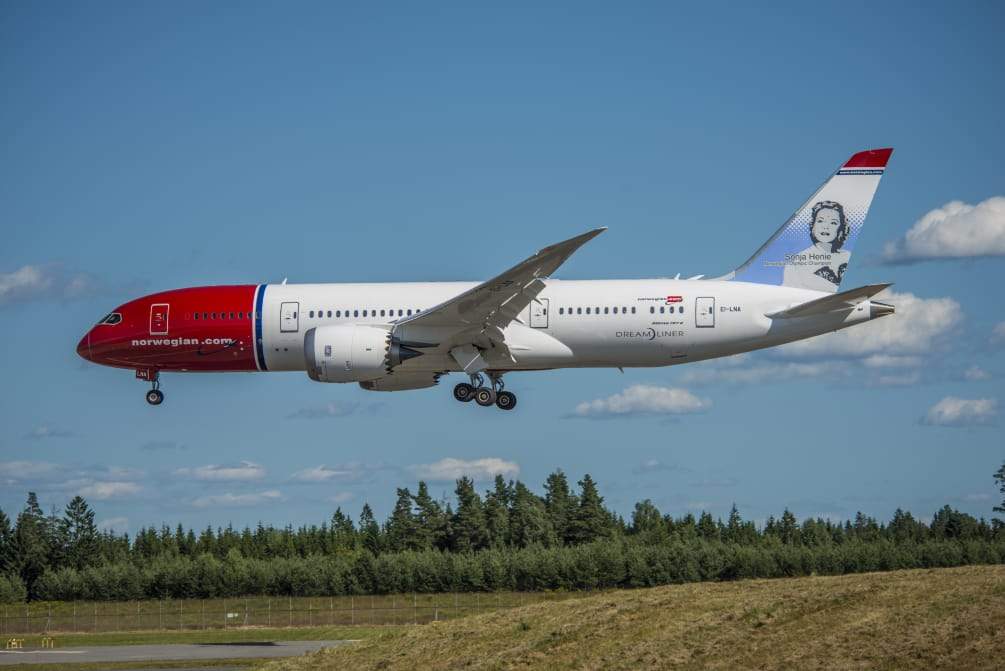 Norwegian has one of the world's youngest fleets, making it the most fuel-efficient airline for transatlantic routes

Norwegian has been named the most fuel-efficient airline for transatlantic routes, according to a new study.

The budget carrier came top of a list including 20 leading airlines for emissions on routes between Europe and the United States in 2017.

It’s the second time the budget carrier has won the acclaim by environmental research group the International Council on Clean Transportation (ICCT), having also come out on top in 2015.

The findings showed Norwegian, on average, achieved 44 passenger kilometres per litre of fuel (pax-km/L), which is 33% higher than the industry average.

One of the reasons for this is because the airline flies one of the youngest fleets in the world, comprised of Boeing 787 Dreamliners, 737-800s and 737-MAXs – which has helped the company reduce per-passenger emissions by 30% since 2008.

Norwegian CEO Bjørn Kjos said: “The most important thing that an airline can do for the environment is to invest in newer aircraft which use the latest technology to be as fuel-efficient as possible.

“Our strategy to have a modern fleet is paying dividends not only for our business and customers, but also our planet.

“This recognition from ICCT is truly the highest form of industry praise and is validation that we’re moving in the right direction with more environmentally friendly planes.

“For customers, this offers yet another reason to fly with us, to help reduce their carbon footprint.

The routes on which Norwegian was most fuel-efficient airline

According to the ICCT study, Norwegian was the most fuel-efficient airline on sample routes from New York to both London and Paris, and Los Angeles to London.

The results showed that BA, which ranked bottom in the results at 22% below industry average for passenger-km per fuel litres, burned 63% more fuel per passenger-km than Norwegian – a marked increase since the last assessment in 2014.

ICCT’s lead author of the study Brandon Graver said: “One of the biggest changes in the transatlantic market between 2014 and 2017 was an increase in operations from European low-cost carriers and the further utilisation of newer, fuel-efficient aircraft.”

Why British Airways was the least fuel-efficient airline

ICCT, an independent not-for-profit organisation with a mission of improving environmental performance across all areas of transport, found the estimated gap between the most and least fuel-efficient transatlantic airlines widened from 51% in 2014 to 63% in 2017.

Although the fuel efficiency of BA’s fleet increased and passenger load factors were similar in 2014 and 2017, ICCT said the freight share of total payload and average seating density of its fleet fell during this period.

A BA spokesman said: “We are committed to reducing our carbon emissions and have improved efficiency by more than 10% since 2008.

“We are investing heavily in modern, fuel-efficient aircraft, including the Boeing 787, Airbus A380 and Airbus A350, and by 2020 will have received more than 100 new aircraft in a decade.

“We are well on course to deliver a 25% improvement in carbon emissions reduction by 2025.

“As British Airways has a greater share of the premium market on the North Atlantic it has more premium seats on its aircraft, which is the main reason its fuel efficiency per passenger appears lower.”

Overall, aircraft fuel burn was found to be the most important driver of fuel efficiency, explaining almost 40% of the variation in fuel efficiency across carriers.

This was followed by seating density, which accounted for one-third of the variation, with freight share and passenger load factors deemed less important.

Industry fuel efficiency improved from 33 pax-km/l to 34 pax-km/l over the three-year period, which ICCT believes could be due to airlines buying more fuel-efficient aircraft models.

Between 2014 and 2017, the margin between industry output and the International Civil Aviation Organisation (ICAO) carbon dioxide emission standard for the average transatlantic aircraft improved from 8% to 5%.

Major improvers in the rankings included Virgin Atlantic, with 30 to 35 pax-km/l, and Aeroflot Russian Airlines, from 30 to 33 pax-km/l.

This followed an increased use of more fuel-efficient aircraft – the Boeing 787-9 for Virgin Atlantic and Boeing 777-300ER for Aeroflot.

But ICCT warned Virgin Atlantic’s introduction of new supersonic aircraft, which are expected to have fuel efficiencies of about 7 pax-km/l, could reverse the airline’s efficiency gains.

Virgin has ordered 20 supersonic planes made by start-up Boom, with the aim of more than halving journey times.

For example, London to New York would take three hours and 15 minutes rather than seven hours, while Sydney to Los Angeles would cut the journey time from 15 hours to six hours and 45 minutes.

Japan Airlines is also unlikely to be the most fuel-efficient airline any time soon after investing $10m (£7.7m) in Boom, based in Denver, Colorado.