The Nestle wind farm, which features nine turbines in the countryside of Dumfries and Galloway, Scotland, will power the company's factories, offices and warehouses in the UK and Ireland 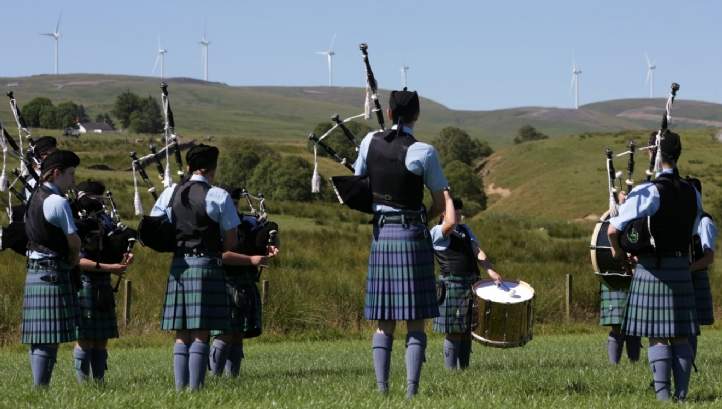 The carbon footprint of a Yorkie and Kit Kat has fallen after food and drink giant Nestle launched a wind farm in Scotland to help power half its operations in the UK and Ireland.

The Swiss multinational firm has partnered with energy business Community Windpower for 25 years to provide renewable energy for its factories, offices and warehouses.

It already obtains all its electricity in the UK and Ireland from renewable sources, such as solar, wind and hydro, on the grid but now it will be able to meet its energy needs with its own power.

Speaking at the opening of the farm, Stefano Agostini, CEO of Nestle UK and Ireland, said:  “I’m proud that Nestlé is doing the right thing and directly contributing to the reduction of carbon here in the UK and Ireland.

“We all have a part to play in reducing climate change and its effects while making sure that we safeguard our planet’s future.

“We already use 100% renewable, grid-supplied electricity across all our UK and Ireland operations, but now with the opening of Sanquhar wind farm, we can supply half of our own energy here in the UK and Ireland.

“I’m delighted we not only using 100% renewable electricity to run our business here in the UK and Ireland, we are now responsible for producing it too.”

The scheme will contribute annually to a local community fund that will be managed by Community Windpower.

Nestle says this will help provide economic, educational, environmental and social benefits for the lifetime of the farm.

“CWP’s long term partnership with Nestlé has delivered a substantial new investment in Scotland generating economic benefits, jobs and invaluable community contributions over the next 25 years.

“Scottish onshore wind is highly productive and Sanquhar will deliver over 45% capacity factor which will be supplied to the grid, thereby reducing fossil fuel generation.

“Global warming is becoming more obvious every day and it’s great to see a company as influential as Nestlé making a stand for the environment.”