The new digital communications system installed by Mitel will provide Liverpool FC fans with a more personalised service when ordering tickets and getting information about injuries, stadium directions and kick-off times - while better connecting the 850 permanent and 2,500 match day staff 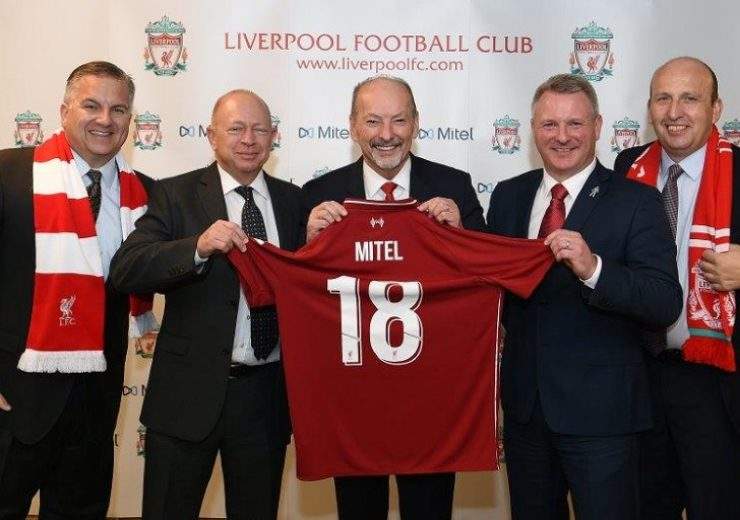 Liverpool CEO Peter Moore, centre, with representatives from Mitel after the club announced the Canadian company as its official business communications partner

Liverpool FC fans will get a more personal and speedy service when contacting the club for anything from buying tickets to finding out directions to the stadium after it unveiled a new technology partnership.

The Canadian company will introduce cloud-based communication and collaboration systems to Liverpool’s 850 permanent staff and will help to connect the additional 2,500 match day workers.

Mitel claims the new technology will boost productivity, speed up decision-making and improve the club’s engagement with supporters.

Speaking to Compelo following yesterday’s (26 November) announcement at Anfield, Liverpool CEO Peter Moore said: “This is a big business and during game days there are 2,500 people working here – the stewards, fan support teams, retail staff and everyone in between – to make the experience as brilliant as we possibly can.

“We have 850 people here in Liverpool and Greater Merseyside that work for the football club without kicking a ball so this is a massive enterprise.

“Technology becomes key to tying it all together.”

Sports analyst Nielsen Sports says Liverpool has a global fan base of 771 million.

Liverpool’s partnership with Mitel will also help the club to connect with its fans via multiple channels, including telephone, online, social media and email.

Graham Bevington, global head of business development at Mitel, said: “If you are a high-performing company then you owe it to your customers to look at smarter ways of communications.

“Whenever you contact the club through whichever means, the club will know your history and what you contacted it for previously.

“It can then get you to the right agent to answer your enquiry.

“The whole experience should feel more personalised – it should be quicker, more accurate and also much more pleasant.

“Contacting your football club is deeper than contacting a business and you want to feel that it’s a personal contact, and that’s exactly what Mitel is able to offer.”

The communications technology provided by Mitel uses cloud technology, meaning that customer data is able to be accessed instantly from any device connected to the same service.

It was suggested the service could be used to help Liverpool answer questions on ticketing, kick-off times, instructions on how to get to Anfield stadium and player injuries.

Which other sport clubs are using Mitel technologies?

Liverpool is not the only Premier League team to partner with Mitel, as the Ottawa-headquartered business was announced as Tottenham Hotspur’s official unified communications supplier in March.

“If you look at the way sports have tried to engage fans – such as in tennis with the Hawk-Eye technology to challenge line calls, or cricket with the on-screen engagement of an appeal and rugby with the ref link – they are leading the way.

“More and more sports are now trying to use communication to make the event before and after much more compelling.

One of the ways Mitel is trying to bring fans closer to Tottenham’s players is through a fitness tracking app.

Young fans will be able to see the daily regime of star players like Harry Kane and Dele Alli, giving in an insight into what they are eating and the amount of physical exercise they do a day.

Mr Roberts added: “One of the things Spurs is looking at is allowing fans to get closer to a star and encouraging young people to have healthier lifestyles.

“As a youngster growing up in north London, I can set my aspirations on someone that I see play every week – I can see their commitment and that my own commitment needs to be the same.”

In the US, Mitel has partnered with Major League Baseball to provide private and secure communication connections for dugouts, video review rooms and press boxes at all 30 MLB ballparks.