Eurotunnel's sustainability efforts for the Channel Tunnel include a recently-installed cooling system that has earned its stripes after new data indicates massive energy and cost savings. 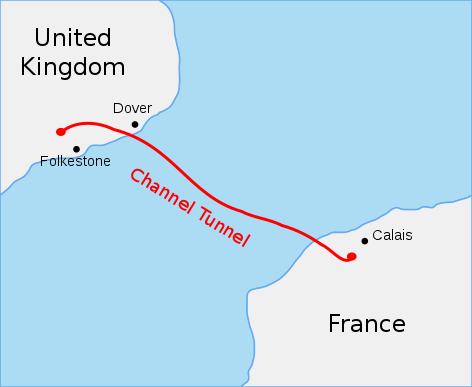 The Channel Tunnel connects Folkestone, Kent, in the UK, with Coquelles, Pas-de-Calais, in northern France.

The Channel Tunnel’s recently-installed cooling system is posting energy savings of 33%, according to data released today (1 June) by its operator Eurotunnel.

The system, which has just reached the end of its first season in use and maintains required temperatures for the train tunnel between England and France, saved 4.8 gigawatt-hours (GWh) last year.

“We saw the replacement of the Channel Tunnel cooling system as a chance to reduce our energy consumption and carbon footprint.

Eurotunnel’s energy and environmental goals for the Channel Tunnel

Eurotunnel has adopted the Solstice zd refrigerant – an environmentally-friendly substance used in the tunnel’s air conditioning – made by Fortune 100 software-industrial company Honeywell.

Mr Gauthey said this mixture, alongside chillers supplied by Irish air conditioning system manufacturer Trane, provided “the best combination of features to help us meet our energy and environmental goals”.

Without cooling, the heat generated by the trains passing beneath the English Channel would reach the maximum amount to still be able to run services optimally – 35C – but with the new system, temperatures are kept at about 25C.

It comprises four Series E CenTraVac chillers from Trane, which are up to 10% more energy-efficient than the brand’s nearest competitor for the same tonnage.

Two have been operational in Sangatte, France, since 2016, while the others are at Shakespeare Cliff, Dover, and have been in use since October last year.

Jose La Loggia, vice president and general manager of Trane in Europe, said: “These chillers have been successfully used in various applications across Europe and have helped our customers to achieve operational savings while lowering their environmental footprint, without compromising safety, reliability and performance.”

The news come as further reinforcement for Eurotunnel’s sustainability drive, which was recently awarded its fifth consecutive certification from the UK’s Carbon Trust Standard for a further 9% decrease of its carbon footprint in 2015-2016 compared with 2012-2013.

The Channel Tunnel was built between 1988-1994 and connects Folkestone, Kent, in the UK, with Coquelles, Pas-de-Calais, in northern France.