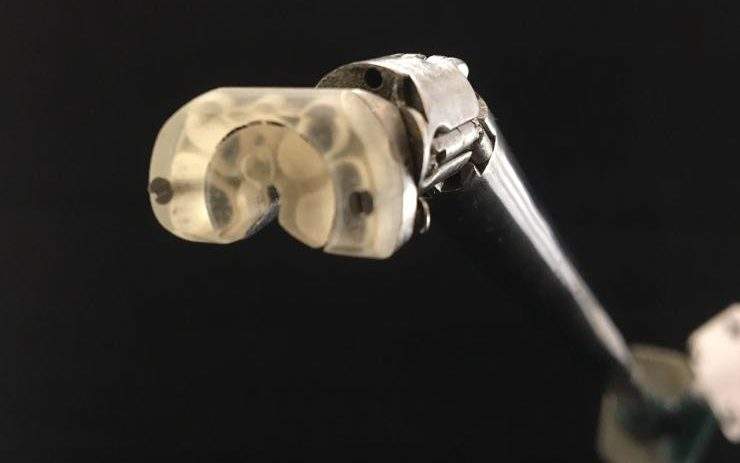 The technique for producing medical stitching hasn’t changed since the times of Ancient Egypt – until now, as tech firm Sutrue unveils a new medical robot that means procedures no longer need to be carried out by hand

All surgery comes with risks, and in particular medical stitching by hand can be problematic as it relies completely on the capability, training and awareness of the surgeon.

After several attempts to produce a device that surgically seams wounds, medical technology company Sutrue has found a solution to the problem.

It has created two automated stitching devices that transform the manual process of stitching to an easier, faster and more accurate automated process – while reducing the margin for human error.

Pointing to data from the York Health Economics Consortium, Sutrue believes the robots, created using 3D printing for rapid prototyping, could save the NHS £10.7m a year.

Richard Trimlett, cardio-thoracic surgeon and head of mechanical support at the Royal Brompton Hospital in London, worked closely with the company on the project.

He said: “It’s true to say that the majority of operations we’re doing today are still open and that’s not because the patient wants them open.

“It’s because of the limitations of the technology and so there are many improvements to technology that we need to get to the point where we can do everything as a keyhole operation, and I see this as one of them.”

Sutrue was set up in London in 2013 for the purpose of designing an innovative new handheld device for suturing – the medical term for medical stitching.

Both the Sutrue robotic/endoscopic suturing devices it has now created are designed to produce a row of stitches, tie a knot and sew around a corner.

The company had to create 38 different prototypes, while it designed and tested more than 1,500 parts – taking 15,000 hours of work to get the finished product.

It can be used for all forms of robotic surgery, but particularly in cardiac, thoracic, cranial and gastrointestinal operations.

Other benefits include increased needle force with the option to reduce needle size to subsequently minimise tissue trauma and scarring, as well as reduction of needle injury, therefore leading to fewer cases of high risk infections such as HIV and Hepatitis B.

The robotic/endoscopic suturing device will also increase the stitching speed, as well as making access easier to hard-to-reach places.

In an endoscopic surgery, an experienced surgeon can take up to 25 seconds per stitch, but using the robot it can cut that time down to only a third of a second each.

Sutrue has worked with several influential medics during the development process of their suturing devices.

One of those is John Pepper OBE, a professor in cardiothoracic surgery at the National Heart and Lung Institute, who believes the handheld device will benefit inexperienced medical staff when closing wounds.

“It’s important, yet often delegated to the most junior person, and tissue damage there can lead to wound breakdown, infection, haematomas and so on.”

The engineering process was made significantly faster due to the use of 3D printing technology – which creates objects from digital files by layering materials – provided by additive manufacturing firm GE Additive.

Sutrue managing director Alex Berry said: “Rapid prototyping has significantly reduced the cost of the creation of the devices, probably by a factor of 50.

“It has also shaved years off the time it would have otherwise taken. We’ve taken a ‘create, print, test, tweak, reprint’ approach to solving the problem.

“We even coined our own term for the working process and called it ‘multi-typing’, which is the ability to loosely design the same component in three or four different ways, have them printed within a few hours and then test and learn from each prototype.

“This approach has been instrumental in allowing a small start-up company likes ours to maximise our output in terms of creativity and problem solving.”