Bloodhound SSC: All you need to know about supersonic car that if you blink, you’ll miss it

The Bloodhound SSC, a supersonic car made from part jet fighter, part space rocket, has been in production for the past decade but is edging closer to being ready to reach speeds of 1,000mph - and smash the 21-year-old land speed record 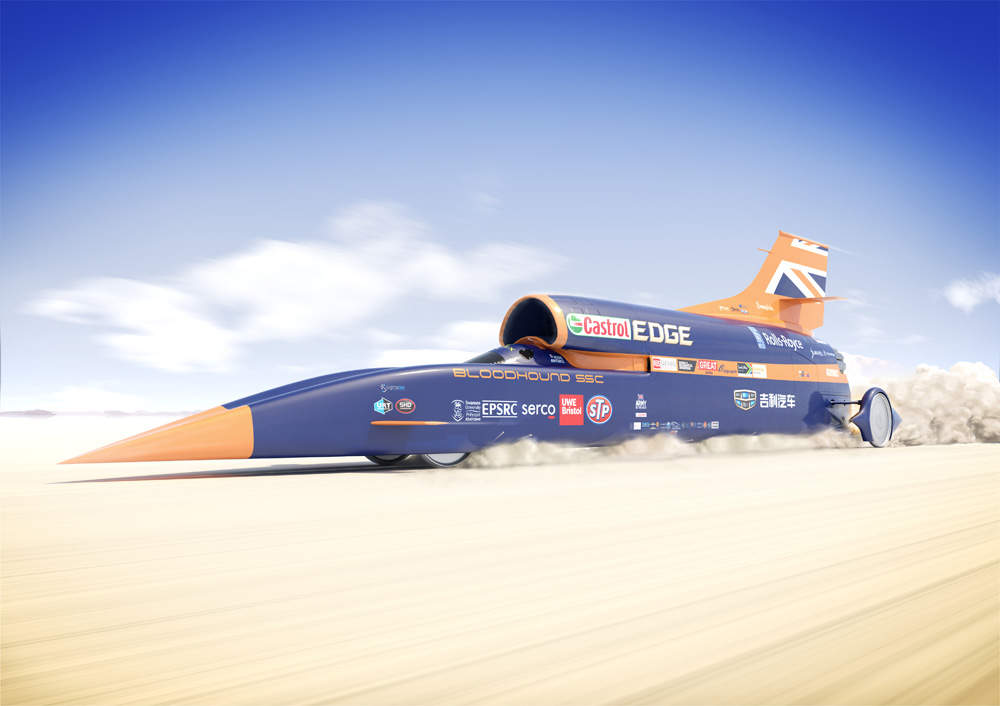 Bloodhound SSC on the move

It isn’t a car you’d get out from a dealership – not even on a Formula 1 track as the Bloodhound SSC takes automotive to a whole new level, gearing up to be the world’s fastest ever car.

With the potential to reach 1,000mph and blast through a mile at top speed in just 3.2 seconds, it is now being prepared for a bid to beat the 21-year-old land speed record.

Built as part jet fighter, part space rocket – on wheels – the Bloodhound SSC, whose initials stand for “supersonic car”, is being tested ahead of a full run-out within the next two years.

Here’s the lowdown on the world’s most advanced car.

How it all began for the Bloodhound SSC

It was back in 2008 when a British team of scientists and engineers took on an exciting £10m project that would eventually lead to the Bloodhound SSC.

Lord Drayson, Minister of State for Science and Innovation, launched a three-year mission led by Richard Noble OBE – who once set a land speed record in October 1983 that lasted for 14 years – to build a car capable of achieving 1,000mph.

That would easily be enough to beat the current record of 763mph, which was set by fellow British driver Andy Green OBE in Nevada’s Black Rock Desert back in October 1997.

The Bloodhound SSC team said it started the project to encourage the future generations to take up careers in science, technology, engineering and mathematics (STEM).

With virtually no restrictions and limits, the car manufacturers spent years and million of pounds developing and testing the unique hand-built car.

Lord Drayson said at the time: “Breaking world land speed records is no longer about strapping an engine onto a buggy and pointing it at the horizon.

“The application of new and exciting science and technology is the only way to achieve such results.

“If Bloodhound SSC is to reach its target of Mach 1.4, equivalent to 1,000mph, the team behind it will need to solve some ambitious challenges in science, engineering and maths.”

Together with the space rocket element, it can produce a staggering 133,000bhp (brake horse power).

With three engines including the Eurojet Rolls-Royce EJ200 jet engine, the Nammo rocket cluster and a Jaguar Supercharged V8, it should soon get close to 800mph.

Using about 400 litres of jet fuel and 800 litres of rocker oxidiser on record attempt runs, there are hopes it will cover a mile in just 3.6 seconds.

In October 2017, it was driven in public for the first time.

Mr Green – the current land speed record holder – took to the driver’s seat in a trial run of up to 200mph in Newquay, Cornwall, giving people an idea of the car’s capability.

Both tests will take place on the dried-up lake bed in Hakskeen Pan in South Africa.

The 44ft long car currently comes in blue and orange, weighing eight and a half tonnes, with a small cockpit and a squared-off steering wheel.

Unlike most cars, it will run on four forged aluminum wheels, without any tyres.

As of last year, Bloodhound partnered up with cloud-based computing giant Oracle, which is now playing a key role in the project.

Oracle has provided technology to help Bloodhound developers collect, analyse and broadcast data from more than 500 sensors installed on the Bloodhound SSC to classrooms around the world.

During a presentation at the Women of Silicon Roundabout conference, Oracle intern Lahini Sivaganeshan spoke about how her company is working with the project team.

She said: “What we want to do is think about the challenges that you could face with reaching the 1,000mph goal.

“We put about 500 to 600 sensors in the car, which will check for temperature, velocity and pressure.

“What we’ve done is we’ve gone to the electric store, picked up a few pieces of equipment, put them together and made that connection between the car and cloud.

“We have Raspberry Pi computers [a series of small single-board computers developed in the UK], we have routers, we have a plat box switch, which is all used to connect the network to the car and it will be placed just behind the driver.

“We also work with the Met Office [UK national weather service] to collect some biometric factors.”

With all the data which it collects, Oracle will be able to help Bloodhound SSC perfect its car in time for the South African test drive in 2019.

It’s a stimulating and challenging project

It launched a model rocket challenge, as part of its education programme in order to give students all over the world the chance to set their own Guinness World Record.

In 2014, Mr Green went to Brazil to work with the British Embassy and help schools in the South American country by teaching them about the Bloodhound SSC programme.

He said at the time: “I’ve met graduate engineers who are adamant that our previous record was what inspired their career choice as youngsters: that sort of thing makes all the effort worthwhile.

“Bloodhound SSC will be so much faster and, we hope, will fire up every school kid about the science and technology.

“We’re going to invite everyone to follow our adventure in this, the most exciting and extreme form of motorsport – the World Land Speed Record.

“Both as a mathematician, and as a Royal Air Force Fighter Pilot, I can’t think of anything better.”

Project director Richard Noble added: “There has never been anything like Bloodhound SSC before.

“It is undoubtedly the most stimulating and challenging programme I’ve ever been involved with – it’s going to be tough, testing and damned exciting.”

It has certainly been a challenge but the Bloodhound SSC is not too far away now from making history.